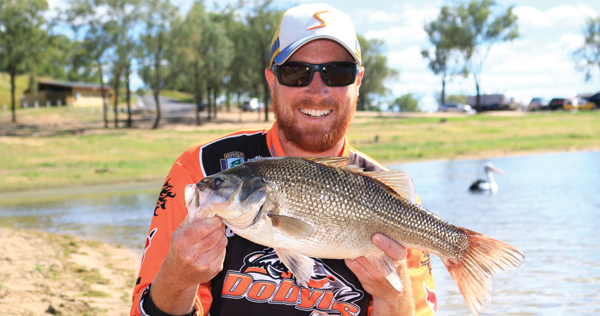 THE final qualifier for the Bluefin Teams series was run at Lake Boondooma and the fish remained on the bite from the March 21-22 Berkley Boondooma Brawl. With Easter just a week beforehand and an extremely competitive field, we were concerned the bass wouldn’t be able to handle the pressure, but if anything the fishing was better than at the earlier comp.

Team Bass Brothers, comprising Stuart France and Dave Young, took the lead halfway through the weigh-in with a monstrous bag of 6.44kg, and no other team was able to eclipse this total. Fishing the Boyne arm with a mixture of baits including Ecogear vibes, Jackalls and flies, the pair put together the astounding bag to take the win by nearly 1.5kg.

Dave also managed to take down the world record bass from the previous event by bringing a 51cm cracker to the scales and taking home the big bass for the event. Finishing in second place after fishing in quite close proximity to the Bass Brothers was Team Nexgen, with Matt Johnson and Shaun Falkenhagen weighing a considerable bag of 5.07kg.

Local favourites Terry Allwood and Matthew Mott of Team Smak/Tonic Eyewear rounded out the top three.
All in all, the teams events are on the up and up, with a 50 percent increase in participation from the previous round.

And with a $30,000 Bluefin boat powered by an Evinrude E-TEC up for grabs in the Bluefin Teams Championship in October, we expect these low-cost events to really blossom over coming seasons. At the end of April we headed to the Hawkesbury River in NSW for the first-ever B.A.S.S. pro-am event to be held on a running river.

Look out for a full wrap-up from this exciting event soon.