THIS submission has been compiled from meetings, workshops, individual and group submissions to Sunfish Queensland over recent years by our extensive southern Queensland recreational fishing network which includes the members of Sunfish.

Recreational fishing tourism is for today, tomorrow and the next day. This is all of us unless you live on a creek and never fish anywhere else. We pay to travel to our favourite spots, whether it is fuel for the car and / or boat, barge fees or plane tickets. With increasing population densities Moreton Bay is one of few remaining safe areas for families to fish that is reasonably accessible from all of Brisbane and the surrounding regions. 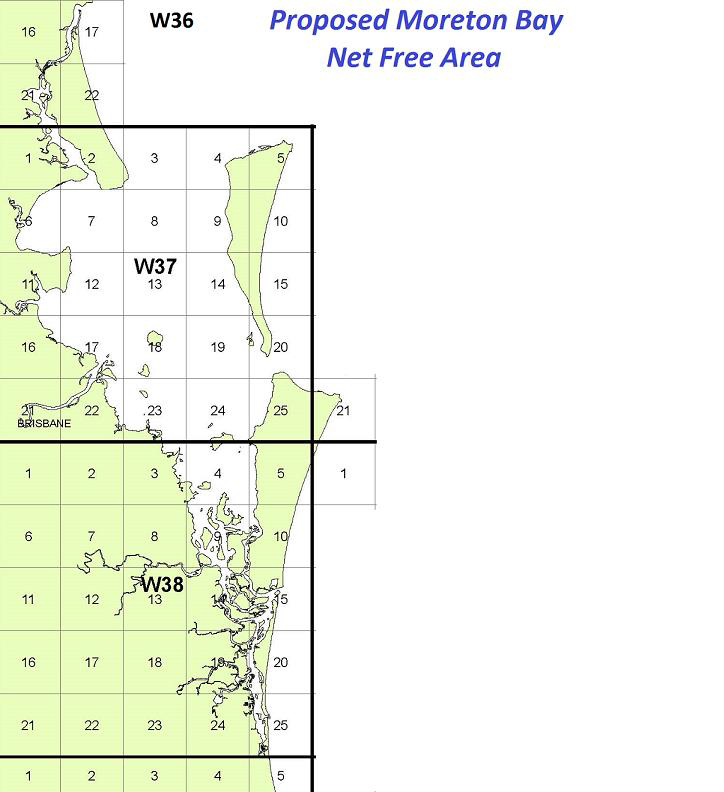 Every year hundreds of kids learn to fish in Moreton Bay. Records indicate that Moreton Island alone is on average 80 percent non-residents on any given day.

The Jumpinpin/Southport Broadwater region of southern Moreton Bay continues to be the most popular recreational fishing location in Queensland, providing a safe and productive fishing venue at the heart of the State’s tourist capital. When considering recreational fishing tourism some of the items to be valued include fresh fish on the table, healthy activity for any individual irrespective of physical capability , age, sex or socio-economic status, tackle bought, bait, fishing apparatus, boats, fuel, vehicles specific for fishing, accommodation, meals and transport costs to access fishing locations especially the islands.

Because of the limited access and the National Park designation, these commercial enterprises are limited in number and nature on Moreton and North Stradbroke Islands. Many of the purchases are therefore bought in local communities prior to departing for the island. This means that a significant reduction in recreational fishing tourists will not only support Island Ferries and local Island businesses but businesses throughout the greater catchment area. The Queensland Government is encouraging tourism on North Stradbroke Island as an economic replacement for sand mining. Recreational fishing is an important aspect of tourism on this and other islands in Moreton Bay.

Currently it is almost impossible to catch a legal sized whiting on Moreton or Bribie Islands on beaches open to netting in what is their peak season. In addition the whiting being netted is not appearing in local markets but we have reason to believe going directly to Sydney markets. Both of these islands are National Parks designated for recreational use. Many trips to these national parks include fishing as one activity. At the moment the benefit of this is being denied them. Research by Sunfish shows that in Moreton Bay the netting by-catches of fish such as bream, tarwhine and snapper are deformed, have severe scale loss, and lateral line dysfunction. More importantly there is a severe mortality of juvenile fish as a result of net by-catch in Moreton Bay.

The opportunity to be able to catch fish more easily for those with lesser skills or those who are now impacted by age or infirmity has seen recreational fishing forums and media sites are all receiving high traffic as to the status of the Moreton Bay Net Free Area as per the Queensland Government’s last election policy. Sunfish Queensland has had a policy identifying nine areas along the Queensland coast that have been identified by local communities as urgently requiring net free areas to provide social, economic and environmental benefits to these areas.

So, contrary to what was reported in the net free area negotiations in the north these discussions have been had along the length and breadth of Queensland in significant depth since at least 2008 and that is not even considering that these have been on the political agenda since Tom Burns and Pumicestone Passage in the 1990’s. As can be expected with discussions that have been ongoing for that length of time there have been many and varied iterations. The submission we presented during this last electoral event was definitely the most polished to date, taking into consideration community expectations for fresh seafood, a high value prawn trawl industry in Moreton Bay and the significant environmental impacts that Moreton Bay has endured over the last 20 years.

Many who read this submission are too young to have been following fishing media during the Burns Inquiry days or even for that matter the Inshore Finfish Review Stage 1 so this is a brief history as to what instigated the most recent request for Moreton Bay to be gillnet free. In 1992 Minister Ed Casey said: “Recreational fishers will be contributing directly to the cost, and administration of fisheries management under Queensland’s new Fisheries Act, the Primary Industries Minister, Ed Casey, said today. He said that starting this week a $6 rise in pleasure boat registration fees would go towards management and maintenance of the State’s valuable fisheries resources. At the same time, recreational fishing representatives will have direct input into decision-making as members of the Fisheries Policy Council, set up under the new legislation, which was passed by Parliament last month. They would also be present on the Management Advisory Committees for Queensland fisheries, and the Zonal Advisory Committees to be formed for different regions.”

That fee which is now called the Recreational Use Fee and has become $20 per registration was intended among other things to create recreational only fishing areas – there was only one ever declared. So, we still pay the fee but have no input into the decision making process and recreational fishing enhancement programs. In 2008, Fisheries Queensland underwent Stage 1 of the Inshore Finfish Review there was determined to be a review that focused primarily on the recreational sector and brought in significant changes to bag and size limits. Stage 2 of the review was to undertake a similar process with a primary focus on the commercial sector – this never eventuated.

Also in 2008 Moreton Bay Marine Park underwent a dramatic review and saw significant loss of access to fishers. The commercial sector received more than $15 million in the structural adjustment package and the recreational sector $2 million in an artificial reef package. In effect that means that there has been considerable impact on recreational fishers fishing from the shore and they have received no enhancement program or consideration of these impacts. Moreton Bay Net Free Area will attempt to redress some of those impacts in addition to the environmental impacts from gillnetting and the significant destructive impacts on local fish stocks caused by extensive localized depletions by gillnetting. According to the ABARES Report “Agriculture, Fisheries and Forestry in the Greater Brisbane region of Queensland, 2014.

The Greater Brisbane area is a key commercial fishing area in Queensland. The coastal area contains Moreton Bay, Moreton Island, North and South Stradbroke Island.
Although the participation rate (14 per cent) of Greater Brisbane region residents in recreational fishing is much lower than in regional centres, the large population means that 37 per cent of Queensland fishers live in this region (Taylor et al 2012). Greater Brisbane residents mostly fish in south-eastern Queensland, with equal amounts of fishing effort in estuarine and coastal waters. More days are spent fishing from the shore than from boats. The most numerous species harvested by Brisbane residents were sand whiting, trumpeter whiting, yellowfin bream, tailor, dusky flathead, blue swimmer crab and mud crab.

Recreational fishing is popular in Queensland, with approximately 700,000 Queenslanders going recreational fishing, crabbing or prawning in Queensland in the 12 months prior to July 2010 (QDAFF 2013). Total expenditure in the sector is estimated to be between $350 million and $420 million in 2008–09 (DEEDI 2009). The Moreton Bay Net Free Area will have substantial benefits but not only to recreational fishers and local tourism businesses but to the coastal and marine ecosystems as well. Gill nets cause significant environmental damage. They have benthic impacts as well as significant mortality issues with undersize target species and by catch including crustaceans.

In Moreton Bay, like many other population centres we are becoming increasingly aware of areas of localized depletion resulting from concentrated, repetitive, commercial gill netting. For example in February of this year we spoke to several groups fishing on the same 500 metres of beach who indicated that contrary to previous trips they had been unable to catch anything of a legal size. Between them they had spent $6000 on their trips that week.

Fisheries Queensland do not have a mechanism for either measuring or managing localised depletion at this point in time. In the national arena at the moment though there are currently investigations into areas that may become closed to commercial fishing so that the recreational sector can still have an enjoyable experience. The commercial sector still have the same allowable catch as previously but just leave some high value recreational areas untouched. Many believe this is the way of the future for Moreton Bay as well as many other high population centres along the Queensland coastline.

For the 405,000 recreational fishers in the Brisbane and Moreton Bay areas (according to Fisheries Queensland Recreational fishing survey 2010) this net free area is crucial and long overdue.
Commercial catch data on the Fisheries Queensland website is quite coarse. As a result the figures we have been able to extrapolate include the tunnel netters and ocean beach mullet netters in grids W36, W37 and who will not be impacted. As a result the total catch estimates we are using will be significantly higher than reality. In 2013 about 1,384 tonnes was recorded in logbooks in these grids this equates to about $6.9 million to the fishermen.

Last financial year the recreational boat owners in the Moreton Bay catchment area paid over $2 million in Recreational Use Fee that is included as part of their boat registrations in addition to the $185 million in recreational fishing related expenditure according to ABARES. Since this proposal has a specific outcome and set of goals there has been a significant list of concessions made on behalf of the commercial fishing sector compared to the outcomes from the three northern net free areas.

The only fishery targeted is the environmentally devastating and socially and economically unacceptable gill net fishery. The previous map we submitted to government was designed to have the above effects. However, in addition what it inadvertently did was propose a significant and expensive compliance management problem. To rectify that we took a step back and tried to simplify the outcome. Gillnetting occurs in foreshore waters so there would be no additional impact by closing off deep middle of the bay waters because there is no gillnet activity there. So this latest map which shows commercial logbook reporting grids shows the area we recommend to be closed to netting under this current consideration. There is still the same net effect as our previous map but with less compliance issues, clarity of where the “lines on the map” are and no confusion for commercial fishers as they use these reporting grids every day they are on the water.
In summary:

The particular commercial licence endorsements that need to be removed from the proposed net free areas of Moreton Bay are:

Recreational bait netting should remain as at present (cast nets and small seines) This submission is current until 31st December 2017 unless superseded. This submission may be disseminated with other stakeholders for discussion.
Sunfish Queensland