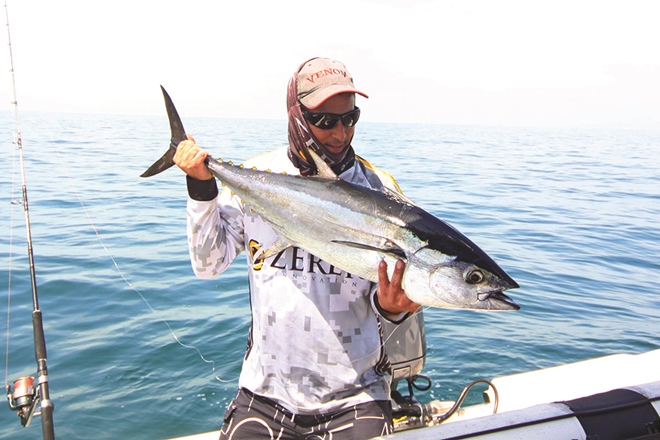 WITH an unusually late start to the Moreton Bay tuna season, the fish have finally arrived.

While numbers are well down on this time last year, there are now enough tuna schools to expect to catch one. The fish are spread from Harry Atkinson Artificial Reef north as far as you’re willing to venture. Plenty of mackerel schools are still around for some lighter action, so it’s well worth having a rod rigged with metal as well just in case.

Due to the late arrival, the Moreton Bay tuna are mostly feeding on blue pilchards 100-150mm in size. With this in mind, stickbaits are well worth starting with, changing over to plastics as the sun gets higher and the fish go deep. Once you have located a few schools, you’re in for seriously fun action because the fish are really starting to fire up and chase down the stickbaits. My last trip resulted in fish caught only on the Zerek Zappelin 160mm. I was initially downsizing the stickbait to match the hatch of about 100mm but didn’t hook up once.

Plastics are accounting for a few fish but the larger stickbaits are doing most of the damage. This is a great bonus because the bigger lures allow longer casts, meaning you are less likely to spook the fish by getting too close in the boat.

Speaking of boat position, your approach speed and outboard noise are major factors in your success or failure in landing one of these spooky sportfish. Try to slow down well short of casting distance from the school and approach them gently. If another boat is going to beat you to the school, it’s best to leave them to have a shot alone. After all, two outboards are a lot noisier than one.

Just remember to position the boat correctly. You want the fish feeding directly towards you if possible. They rarely turn around to hit a lure travelling in the opposite direction to all the bait they are feeding on.

Another thing often overlooked is the sun’s direction and angle. Just like us, tuna cannot see as well when looking directly into the sun. Position the boat so you are looking into the sun if possible. After all, we are wearing quality sunglasses while the tuna are not.

One tactic we stumbled onto last season was a dead-sticked plastic fished in the rod holder. This has proved deadly on multiple occasions now. We have been fishing the 3.5″ Zerek Flat Shad rigged on a 3/8-1/2oz, 3/0 heavy-duty jig head. Once you have found a few schools feeding, it’s as simple as throwing the Flat Shad out the back, letting a little line out and simply placing it in the rod holder.

These plastics with their paddle tail will swim at speeds as slow as 2km/h. For some reason the tuna just can’t seem to help themselves and smash the plastic. Getting the rod out of the rod holder can be interesting and I strongly recommend you have a solid rod holder before attempting this method.

Now’s the time to get out and enjoy chasing these speedsters. Things will only get better over the next few months.

I hope you all get the chance to get out and catch a few beautiful Moreton Bay tuna. We really do live in paradise. Enjoy it and respect it because not many know just how amazing this stretch of water really is.