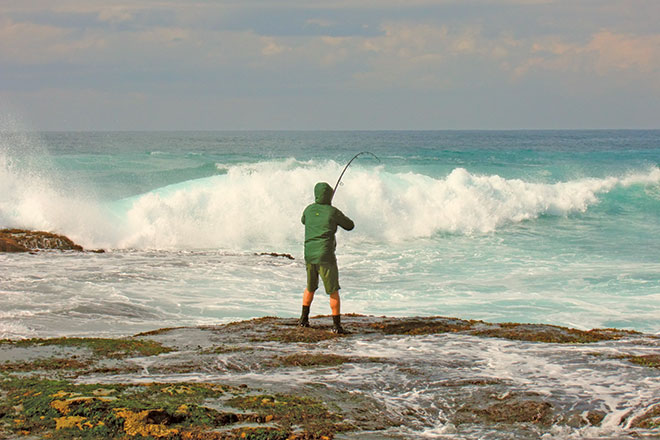 This angler hooked solid on to a daytime jewfish.

It never ceases to amaze me how many anglers still believe jewfish are primarily a night-time feeder, when in fact anglers in the know will actually catch the bulk of their large jew during daylight hours. Myths busted on jew

Personally, all of my 30kg plus fish have been taken during the day and the majority of my 20kg plus fish were also taken during daylight hours, be they from the breakwalls, beaches or headlands. Myths busted on jew

The accompanying images are a little taste of what’s possible without putting in long nights with little or no sleep – and are prime examples of what’s possible if an angler is prepared to be versatile and adapt to the changing conditions from day to day. Myths busted on jew

I have been blessed to be able to spend the bulk of my life fishing for these fish day and night because in the mid-1980s I had a commercial licence, which meant that I fished virtually 24 hours a day – rod and reel only – and in turn I enjoyed some memorable catches.

During a flood, I can assure you that as long as you have mud coming out of the river mouth, jewfish will be there waiting for a feed day and night – you just have to try different lures and bait to find what ticks the box on that particular day.

Even off the headlands, I’ve noticed over the years that very seldom have I ever caught jewfish on feather and minnow lures in the same session, as they definitely appear to prefer one or the other but hardly ever both.

During a flood, try using a large 14cm plus minnow lure and casting out into the current, feed your lure out 100-200m then slowly retrieve it at a snail’s pace – you will be amazed how many times fish will be laying slightly out of normal casting distance.

I have used this technique with enormous success over the years – from South Wall Ballina and Evans Head as well as at Iluka.

Back in the 1980s, I would fish a run-out tide at Iluka during a northerly wind with octopus, then head up to South Wall Ballina by dark and catch live yakkas and little black sweep, then fish for jew on the ocean side of the wall come dark.

All of the photos except Mischa’s bluff schoolie are archive pictures, used simply to show what is possible if you dare to try.

January is the month that marks the start of land-based pelagic season on the far north coast of NSW, with the South Wall Ballina usually producing quality spanish mackerel on the Australia Day long weekend if sea conditions permit.

Come February, the action moves down to the headlands at Evans Head and by the end of February longtail tuna and spanish mackerel begin to make an appearance at Iluka.

Prior to this, the offshore brigade will have been in to these fast-fighting fish around Christmas, with spotted mackerel making up the majority of catches.