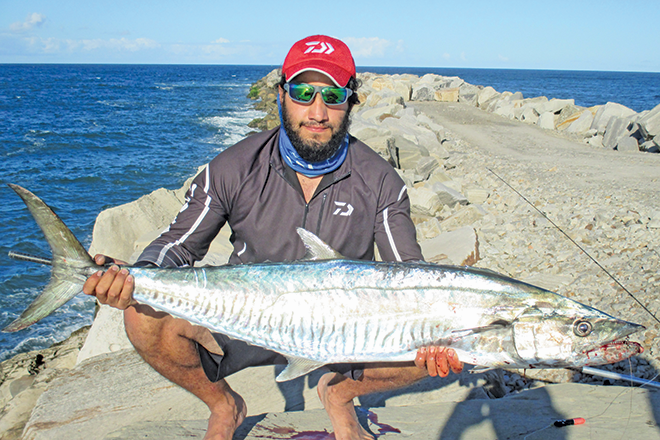 By the end of this month, solid spanish mackerel such as this will be taken from along the coast of northern NSW.

Fishing around the Iluka and Yamba areas has been fairly good recently, with some excellent catches being reported from the headlands and breakwalls. angling Northern Rivers

The southern end of the Iluka Bluff has been on fire for plenty of large jewfish on minnow lures during a falling tide, with the largest fish weighed at the local tackle shop tipping the scales at 26kg. angling Northern Rivers

Several other fish have been taken over the 20kg mark from this location, with numerous smaller fish ranging in size from 7-16kg also falling to hard-bodied minnow lures. angling Northern Rivers

Both Iluka and Yamba walls are fishing well for jew at night during the high water, with live yellowtail and fresh torpedo squid accounting for the majority of fish, while those who prefer to use soft plastic lures are landing nice school jew around 8kg during the slack low water.

Inside the river there has been an abundance of small juvenile mullet throughout the lower reaches and I have heard jewfish busting into them at several locations in recent weeks.

Several anglers even managed to land nice fish around 12kg when fishing the beach adjacent to the Iluka Bluff using small strips of fresh mullet meant for tailor.

Speaking of tailor, a handful of choppers around 2kg have been taken from both Main Beach Iluka and Shelly Beach over at Yamba with Woody Head, Frasers Reef at Iluka and Lovers Point at Yamba being the pick of the headlands for tailor on metal lures.

Bream are around in healthy numbers, however the majority of fish are in reasonably poor condition – this should change in the next month or so as they gear up for their annual spawning run.

Even though there is still a fair bit of colour in the river at low tide, a feed of whiting is still to be had around the sand flats and along the southern bank of Goodwood Island and humble flathead are biting freely, giving anglers a nice mixed bag.

The offshore brigade has finally had some decent weather, with most boats chasing the good run of spotted mackerel that has kicked off along the coast recently, and there has already been the occasional lucky boat returning with a spanish mackerel or longtail tuna.

February is the month that land-based pelagic anglers get excited over, as it’s the month that all of the breakwalls and fishable headlands along the Northern NSW Coast start to fire for the most prized species, such as spanish mackerel and longtail tuna.

Anglers from as far away as Melbourne make their annual pilgrimage to places such as Iluka in the hunt for these line-burning speedsters, which in itself is a great thing for the local economy, particularly during the off season.

The vast majority of anglers fish with live bait such as garfish or yellowtail suspended under a float, which is by far the most productive way of getting a fish.

However, I only ever sight fish for tuna, casting surface popper lures with my trusty Pacific Composites FSU 5162 rod matched with my aging Alvey 700A5 loaded with 30lb Platypus Low Stretch mono line.