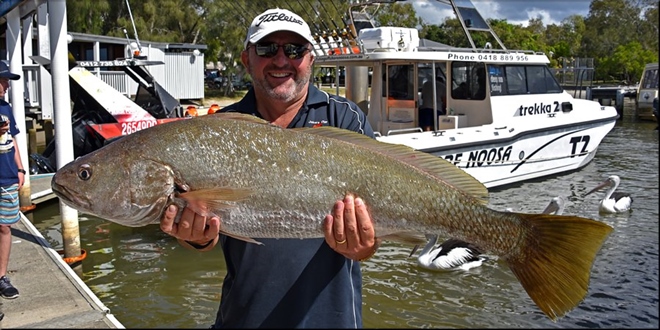 David Jones from Coolum Beach won this week's $50.00 Davo's Fish of the Week prize with his standout jewfish, boated on a Trekka 2 charter to Sunshine Reef. Photo: www.fishingnoosa.com.au

The Noosa River has had yet another flush through after recent rains. With the full Moon this week and the larger evening tides I would be focusing my effort on the lower reaches of the river.

In Woods Bay there have been good numbers of trevally (big eye, gt, golden) and tailor being caught throughout inner and outer Woods Bays.

Blue Blue micro jigs and Storm 8 and 12g Gomoku jigs have been some of the standout lures.

Around the Sand bags Trevally and tailor on poppers and soft plastics.

There’s been heaps of jacks caught over last week around Noosa Sound and the river mouth.

Now with all the dirty water is flowing the river mouth would be your best bet. Soft vibes like the Fish Candy from River2sea in the large paddle should work a treat.

Make sure the drag is locked up as these ambush predators will have you back in the rocks in no time.

In the fresh water Lake Macdonald has seen good numbers of bass being caught hopping lightly weighted soft plastics and blades over the weed.

Some of the standouts have been Keitech Easy Shiners, Berkley Ripple Shads and Zman Slim Swimz with jighead weights varying from 1/12 to 1/4oz, with the favourite blades being a 1/4oz Little Max in a variety of colours.

Fishing finesse plastics and blades over the weed is a very effective technique, you basically want to be bumping the lure along the top of the weed and ripping it out.

The bass are often sitting under the weed and when they see it move they come up and crunch the lure.

Spinnerbaits have been another good option with the Bassman Carls Compact and Keitech Custom Mini Spin producing the goods.

On the reefs, Sunshine Reef has fished well with the dirty water, there have been plenty of coral trout being caught on livies, pillies and micro jigs like the Storm Koika jig and Shimano Colt Snipers.

Good numbers of sweetlip as well as snapper starting to show up in better numbers.

Spotted and spansih mackerel are still around in good numbers along with mac, longtail and yellowfin tuna.

With the dirtier water in close they should move a bit wider looking for that cleaner water.

With the Easter holidays all done and dusted, Mother Nature continues to put the brakes …