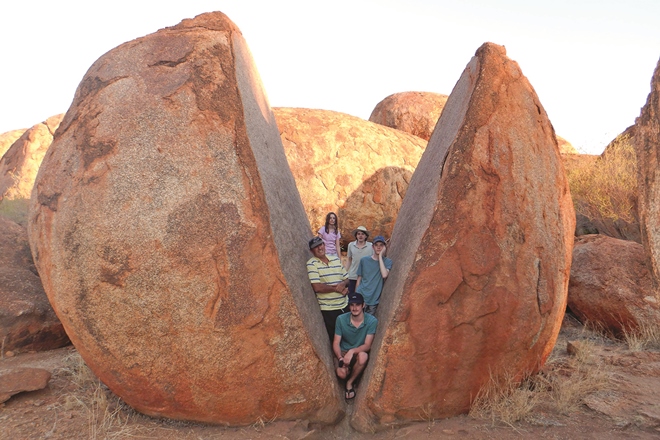 The author and his mob at Devils Marbles.

Northern Australia is epic and enjoyable

FOLLOWING on from earlier in the year, I had spent about three weeks camped in northern Australia at Pennefather River on Cape York.

My mates started packing up but I was planning on staying another week in beautiful northern Australia. Then I heard my mate Darren say to the other boys they were going to slowly free camp their way home. I had not done that in years and it sounded fantastic, so two hours after they started packing, I got packing too. The mates finished and were going to have a look around Weipa and stop and look at things on the way back.

I planned to meet up with them at Archer River that night. Around two hours later I said my goodbyes to Rod, Bob and Penny and I was off. I got fuel at Weipa and stuck the right foot down a bit because the road was great. I made it to the Archer about an hour before dark. The boys had only arrived 10 minutes before me, so we searched for firewood, set up our swags, cooked a feed and relaxed around the campfire.

How good is Cape York and the rest of northern Australia for its free camps on the rivers!? The next day we were up and away after brekkie at the Archer River Roadhouse. I had not done that for about 15 years. We made it off the Cape that day because the road back had just been graded and was great. We saw the Atherton Tablelands in daylight with all the sugarcane and small crops; what a lovey part of Queensland.

Pulling up around Ravenshoe to free camp for the night, we found it freezing cold. The next day we pushed on down past Charters Towers and Darren and the boys headed to Alpha. I continued to Emerald and towards home, pulling up for a camp below Rockhampton.

On arriving home the next day, I unpacked before changing all the oils and filters in the 80 Series LandCruiser so it would be ready to go a few days later for our family trip to another icon of northern Australia, Darwin, in the pop-up van. That day soon came round and we found ourselves heading up the highway and out past Kilkivan. Then we turned towards Isla Gorge, which I had heard a lot about.

We spent an hour or so looking at the different land formations, and it was nice but nothing outstanding. There was a free camp and toilets but we pushed on towards Emerald. Gee there are lots of coal mines out west. We free camped on the side of the road the first night. The only bummer was a total fire ban for Queensland had been issued, so we could not have a fire.

The next day we were up and away out past Longreach and Winton and then to Mount Isa, looking at a few touristy things on the way, but not many because the plan was to get up near Darwin before starting on the tourist places. We camped off the side of the road between Mount Isa and Camooweal and the next day around dinner we pulled up under a bridge just on the northern side of Camooweal.

When we got out of the car there was a weird noise and we worked out it was hundreds if not thousands of small bats roosting in the concrete bridge beams. From there it was only about 10km to the Northern Territory border. We took a few photos and pushed on as there is a lot of miles to do to get to Darwin. We fuelled up at Barkly Homestead and then carried on to Threeways.

From here, we headed north about 70km to a free camp where we stayed the night. The next day we travelled further north past some historic pubs in the NT. We are not drinkers, so they were no attraction for us and we did not stop at any of them. Pulling up in Katherine, we had a feed and then headed out to Nitmiluk Gorge Caravan Park to camp and book our gorge tour for the next day.

Donna and I saw all these places in northern Australia in 1996 and we were going back to show our kids. They loved the boat ride up to the two gorges and so did we. From Katherine, we drove to Darwin and booked into a caravan park for four nights. The next day we drove to the Adelaide River.

About 4km before the bridge over the river we turned off and followed signs to a crocodile tour. We crossed big floodplains and went past a large fish farm and pulled up just as the tour was about to leave. We did the jumping crocodile boat ride and saw two big crocs over 5m up close. One was 90 years old and the other 70.

It was flaming unreal.  It was a small, family owned boat with only 20-odd people on board. The skipper told us all about the crocs and the local area. I asked a few questions and he told us the fish farm we passed was the biggest barra farm in Australia and the floodplains we drove over to get there were the Humpty Doo rice fields I had heard so much about as a kid. The magpie geese ate nearly all the rice back in the ‘60s. They shot them in the thousands but could not stop the droves coming in and eating the rice.

From there we drove out to Corroboree Billabong to see if we could get on an airboat ride. The website said they were open all day but no one was around this late in the day and our phone call was not answered.

We headed back to Darwin and the next day did a few tourist attractions around the local area, such as the Darwin Aviation Museum, the oil tunnels at the waterfront and the Museum and Art Gallery of the Northern Territory. Anything that was not overpriced because it was going to cost $195 each for the six of us to do the airboat ride.

We got the phone call we were after from the airboat people and booked and paid to go the next day. We got away early and went back to Corroboree Billabong where we were met by Chase who was our skipper for the 45-minute tour. She had been skippering for 20 years and had her Master 5 qualifications. The airboat was about 6.5m long, held six passengers and skipper and was powered by a 503 cubic inch Chevy V8 that sounded great.

I thought we were going to drive flat-out everywhere, which I was a bit worried about, but it was not like that at all. Chase just poked around the lagoon and anything of interest she saw, we would stop and she would tell us about it. We saw a black-necked stork land on its nest, and Chase had only ever seen that eight times in the 20 years she has been skipper in this part of northern Australia.

We saw wild pigs and birds of all sizes and shapes, fresh and saltwater crocs and a wild buffalo. The airboat tour was fantastic and took me back to watching Gentle Ben on TV as a kid. I even got to sit in the skipper’s seat. After the airboat ride, we drove to Batchelor and through Litchfield National Park before returning to Darwin late in the day. The next day we packed the van and left Darwin, heading around to Wagait Beach.

It was a lovely spot, as are many in northern Australia. We spent an hour or so wading along the beach but it had no free camping. We should have gone out to Gun Point because it has free camps. From there, we made our way back to Katherine. A great info centre has lots of brochures and information.

The next day we were away early and travelled back down the Stuart Highway to Karlu Karlu or the Devils Marbles. We had a great look around them and another day was gone, so we camped up the road at a free camp. The next day we were away early and headed back towards Queensland. Just before the border at a place called Avon Downs there was a police RBT set up and we passed everything from the breath test to tyres and seatbelts.

I thought our 4WD and van were spot on but in the officer’s opinion my towing mirrors were not wide enough to see a car behind the van, so that cost me a $100 fine. Not bad I thought, as I have heard some horror stories of vans been weighed and put off the road for being overweight. I had weighed our van and 4WD weeks ago to make sure it was fine before I left.

We made it to Mount Isa where I quickly bought some towing mirrors before the shops closed. Then I thought we would book into a caravan park but most of them were shut at 5pm. This really ticked us off because it didn’t get dark until after 7pm. Not everyone likes to pull up early. Many people including us like to keep driving until it starts to cool a bit.

So instead of staying overnight in a van park, we free camped just out of town. The next day the kids and I did the underground mines tour while Donna went shopping to stock up on supplies. The mines tour was fantastic, with old miners guiding the tour and corned meat sangas to die for. My kids rated the Hard Times Mine Tour a solid nine out of 10.

From there it was on to Julia Creek. I had heard so much about this town from a woman I work with at the school. We pulled up and had a smoko stop. There were free barbecues, great toilets and these wild-looking rocks called Moon Rocks. It really was a lovely town.

Richmond was the next port of call to check out the water dinosaur fossils. We free camped just outside Richmond and the next day did the self-guided tour. It was OK, but I preferred the fully guided tours that run around Winton because I feel they are better value for money. Sorry, Richmond, you need to throw smoko into the price.

Craig has been fishing for 45 years and specialises in using bait. Fishing off Double Island Point is his favourite, followed by beach fishing. He also loves fishing Cape York around the Pennefather River.
Previous Kayak rack project rejigged
Next Westerly winds fire up fish on Gold Coast