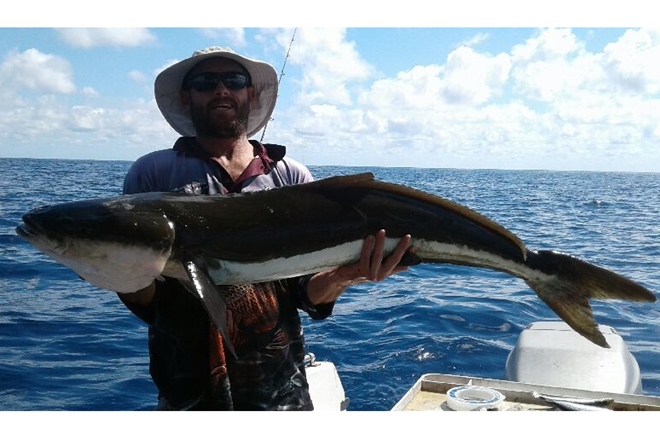 Owen Nowland with the cobia he caught recently.

A little break in the weather at the end of the week saw a few guys hit a few of the coastal offshore reefs off Bundaberg.  Most of the offshore reefs not too far from shore such as Ryans, the Two Mile and the Cochrane Artificial all produced a quality feed.  Some big grunter, grass sweetlip and a few early season snapper made up most of the species which have been caught on the evening tides.  There are plenty of school and spanish mackerel also, so it will be worth trolling a lure or livie.

Both the Baffle and the Kolan systems are in really good shape going into the cooler months.  Most of the deep holes and rock bars are still producing some quality mangrove jacks and an odd barra, with live-baiting working well.  Most of the main channels are producing some grunter and big bream, and there is plenty of whiting and flathead on the flats to keep you entertained.  Rumour has it that there is still plenty of prawns about these systems also.

There seems to be a good number of schoolie mackerel about the Burnett River mouth with early morning high tides being best.  All the rocky areas are holding big numbers of big bream.  Most of these bream have been caught on small soft plastics with the Zman Grubz and Squidgy Wrigglers being standouts.  Some of the deeper holes and bridge pylons are holding a few jacks and salmon along with plenty of river jew.  Most of the sand bars are producing flathead, whiting and some cracker sicklefish.  As always, the last of the run-out tide seems to be best.  Again, there is a good number of prawns getting about, so dust off the cast net and give it a crack.

There is a good number of whiting getting about the Elliott, with full moon tides being best. Upstream sees a few cod and jacks along the rocks, and decent mud crabs seem to be moving about this system as well.

There are plenty of bass about the lake with a lot being caught up in the timbered area.  Most of the bass have been caught on spinnerbaits slow-rolled around the trees.

Lake Monduran is fishing fantastically well at the moment, with a lot of barra being caught.  Most anglers are catching between five and ten barra per session and barra to 93cm have been caught.  Most of the barra have been caught about half way up the dam, and it’s the smaller lures doing the trick.