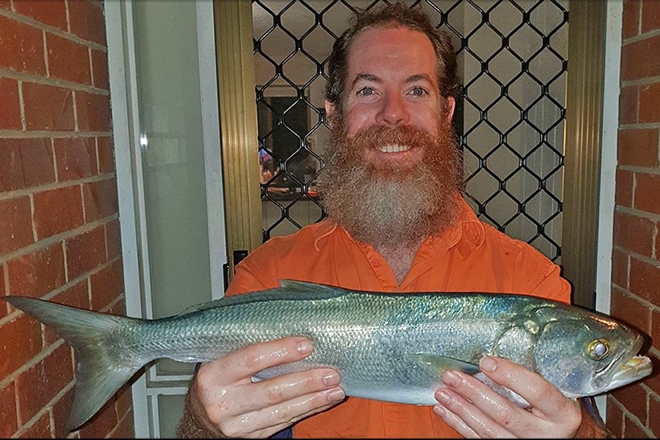 Luke Moroney bought a block of pillies during the week from Davo's Tackle World and snuck off over to the North Shore for a fish on Wednesday just on dusk. Landed this nice tailor measuring 54cm. Photo: www.fishingnoosa.com.au

Cool water species on the chew off Noosa

With some spectacular weather around Anzac Day, plenty of anglers headed offshore. There have been some great reports of cool water species biting well, with good pearl perch and snapper from the Barwon Banks and Parrot, Amberjack and Moses Perch also amongst them. Up on North Reef, more cool water fish including Snapper, cobia, jew, and mackerel have also been hitting the decks in good numbers as well as good numbers of tuna. In the bay tuna are still feeding hard on bait schools with mack tuna the most prevalent, there is the odd longtail amongst them taking anglers by surprise. Metal slugs like the Arma Metallic up to 40g have been working very well on the pelagic’s, other options that have worked well have been Jackson Kaiken stickbaits in 120mm size or Nomad Madscad in the 95mm size with a fast-constant retrieve. Sweetlip have been well spread throughout most of the major reefs, with the bigger fish caught during the lower light periods. There has been some good coral trout on Sunshine Reef, fishing hard to the reef is the best way to come into contact so a running sinker rig with the sinker all the way to the hook should see results. For those chasing snapper the floater rig in a well maintained burley trail has been getting the best results. With the whales due to start migration over the coming week cobia will become more abundant, numbers of these fish always seem to improve as the whales move through.

In the river; the river mouth and dog beach area has been producing great number of quality bream, whiting and flathead drifting both live and dead baits. Live herring and live worms have been the stand out baits and small pilchards, white bait, and cured worms have been the preferred dead baits. Big schools of bait have been prevalent in the river, this in turn brings in the trevally and tailor with Woods Bay and Noosa Sound prime areas, they have been responding well to surface poppers and surface walkers, prawn imitation soft plastics have also claimed some nice fish as the sun gets a little higher in the sky. Surface poppers like the Nomad chug Norris and Dart Wings have been working well, along with pre-rigged gladiator prawns and pro-cure scent later in the day. Along the Gympie terrace stretch using worms has been producing quality whiting over 30cm as well as good sized bream. A little further upriver the Tewantin stretch and the first ski run has been producing jew in the low light periods. Paddle vibes like the Samaki Thumper Tails have been dynamite on the jew as well as the odd trevally. Lake Cooroibah has seen good numbers of pan sized flathead fishing shallow diving hard body’s in the shallow waters. Up between the lakes jacks are still on the chew with live bait seeming to claim most of the fish. Amazingly crab numbers are still quite good with plenty of anglers reporting good bucks amongst the many jennies. Remember to mark both your pots and your floats.

On the beaches the tailor are also starting to show up, the schools are small and a little spread out so if you are on the North Shore it may pay to keep moving to locate a school. Good sized bream and dart are in the close gutters with the top of the tide the best to target them. Prawns small fish baits and worms cast to the back of the gutters and roller under the white water has seen some good results. Whiting are also about with the southern beaches around Marcus and Peregian fishing well on the run out tide. Live worms have been the favoured baits with plenty of anglers getting a good feed.

In Lake McDonald, Bass and small Saratoga have been lurking around the weed beds and edges, try casting poppers and walkers at these areas in the early morning and late afternoon, give the Mega bass dog-x juniors a go. In Lake Borumba Saratoga and Bass are taking surface walkers and Bassman spinnerbaits. Cast those spinner baits along the edges and use a slow steady retrieve.  Another option as the sun gets a little higher is plastics in the 2.5-3” size. Try Zman Slim Swimz in Baby bass and motor oil with 1/8th jigheads.