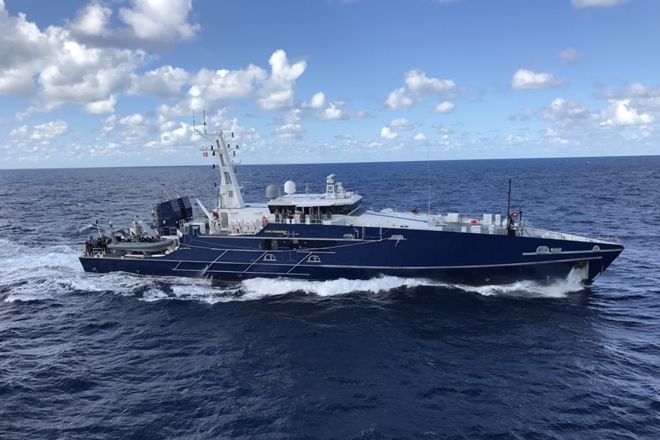 OFFICERS from Maritime Border Command, a multi-agency task force within the Australian Border Force, and the Australian Fisheries Management Authority, have boarded six foreign fishing vessels in the Western Pacific Ocean and identified 13 potential breaches during an 11-day operation focusing on illegal fishers.

Operation NASSE, a multi-lateral regional maritime surveillance operation between Australia, the US, France and New Zealand, ran from July 3-13 and covered the waters between Exclusive Economic Zones of regional countries. Its aim was to deter illegal fishing in some of the most intensely fished sea-lanes in the region, the Western and Central Pacific Oceans.

Together, the operation resulted in the boarding of 27 foreign fishing vessels, with 30 potential breaches of fisheries laws being reported. Agencies from each of the participating countries collaborated in the planning and co-ordination of assets as well as provided an at-sea response capability and air surveillance support during the operation. This included an ABF Dash-8 surveillance aircraft and Australian Defence Vessel Cape Fourcroy with officers from AFMA on board.

Acting commander MBC Jo Crooks said this area is well known as a target area for illegal fishing ventures. “This multinational effort showcases the strengthened patrolling of these waters and efforts to protect the maritime and fisheries environment of the broader region,” Commander Crooks said. “Information gathered will contribute to a more accurate picture of fishing activity and the health of fish stocks in the areas patrolled.”

AFMA’s general manager operations Peter Venslovas said the close collaborative efforts of Australian authorities and neighbouring countries demonstrates the commitment to combatting and preventing illegal fishing. “This multilateral operation saw AFMA and MBC working closely with regional counterparts to patrol fishing grounds on the high seas that are next to Australian waters,” Mr Venslovas said. “These exercises are important to keep foreign fishing vessels in check because they are fishing for some highly migratory species that are also found in Australian waters.”

The operation’s objective was to board and inspect foreign-flagged fishing vessels to verify compliance with measures adopted by the Western and Central Pacific Fisheries Commission.