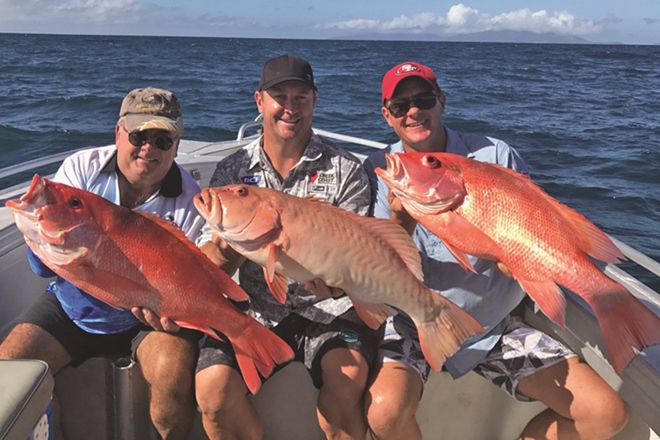 Billy Bradnam, Scotty and Ash with plenty of red.

IT’S been an interesting month at Hinchinbrook Island and Lucinda.

Wind has blown non-stop and it seems like every time I look at the synoptic chart a big high-pressure system is rolling through the Great Australian Bight, which results in very strong onshore wind up here. A bit of exciting news was Scotty Hillier and the Creek to Coast crew flew up with Ash Bradnam from Nova 106.9 to film an exclusive episode on Lucinda and Hinchinbrook and really showcase the versatility of fishing here. On their first afternoon, the boys headed into the hinterland surrounding Hinchinbrook to fish rainforest-lined creeks chasing sooties and jungle perch. The next day, they fished Hinchinbrook Channel and caught great mangrove jack on baits.

And then the following morning was spent with me on our Crackajack Sportfishing bluewater boat where we travelled out to chase big nannygai and coral trout. The weather wasn’t very favourable and it was blowing a stiff 15-20 knot southeasterly with quite a bit of swell and roll, so we ventured out around the Palm Islands to some secret little lumps and bumps that I have found on my days off when sounding around for hours on end. It was always going to be a great day with lots of laughs, and from the moment I arrived at the jetty to pick up the boys, Scotty and Ash had us all in tears of laughter. Funny stories and antics were the theme of the day, though a lot of the stories I will never be able to repeat. However, I will always remember them!

It wasn’t a bad run to the islands, but as we pushed out past them we became really exposed to the swell, so we just took our time and anchored up on the first rock. Almost as soon as the bait hit the bottom, the boys were on, with a couple of solid fish of about 3kg coming over the side and Ash was in nannygai heaven. I think Ash out-fished Scotty at first but the big fella came back with the goods later in the day. After landing a few decent fish on the first spot, their size dropped off, so I decided to move about 2.5km to another rock. It took a couple of attempts to anchor the boat in the right position because the rock was only the size of a small car, the seas were rough and the conditions windy, which made it a bit harder than normal.

The boys dropped down and were on straight away, with Ash, Scotty and Ash’s father Billy getting cracker nannygai in the 6-7kg range, which was great considering how close we were to the boat ramp and the conditions we faced. All the guys were capturing quality fish on every drop including big nannygai and coral trout and then right at the end Scotty hooked a really good fish that we initially thought was a red emperor, but as it came to the top we realised it was a quality bar-cheek trout, and boy didn’t the big fella fire up! He was rapt.

It was great fun spending time with these lads, and I take my hat off to the cameraman who was a legend to be able to film in the tough conditions. We only fished for a couple of hours but they had more footage than they needed for their show and Ash needed to get back and catch his flight to Brisbane. This episode will first air on June 24 and again on July 2. However, if you miss it, you will be able to catch it on Yahoo Plus7.

The International Fishing Series will also air in July and you’ll be able to watch three top Asian anglers going head to head here in beautiful Hinchinbrook. It is really great to see people are starting to realise what a special place we have here and people all over the world are going to be able to see it in its picturesque glory. Exciting times ahead in Hinchinbrook. It’s also wonderful to see the local council getting on board with tourism for the area. Hinchinbrook is a place everybody needs to see and experience at least once.