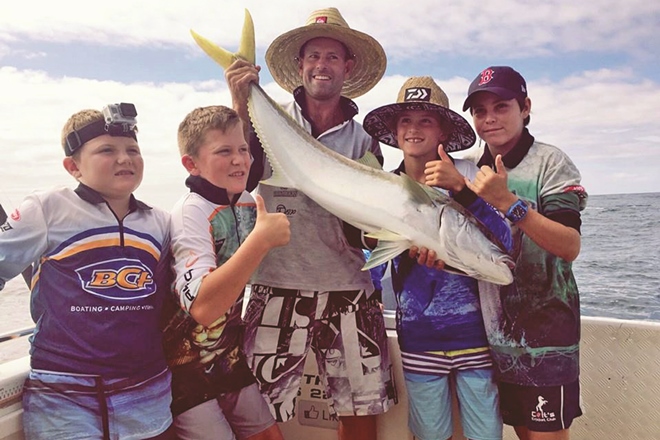 Paul, Liam, Beau, Bayden and Connor were pretty happy with this kingfish.

Fish the Deep charters back in action

AFTER a few months away from the written word, it is time to talk about the winter fishing that has been firing for Fish the Deep off the Gold Coast.

The sun is shining, the seas are flat and the bigger species are hungry and taking the bait. Our warmer weather earlier in the year treated the visitors well and the boats were full but the pelagics were not playing in the coastal waters. However, most charters brought home good feeds of fish, with no one going home hungry.

The spotted mackerel arrived two months late, which was very disappointing for the many anglers waiting for them. Fish the Deep finally saw two weeks of good mackerel fishing, with quality catches for the barbecue. Just as the fishing got back into full swing, a cyclone named Debbie decided to drench the east coast of Australia, causing heartache and pain for so many families.

To top it off for us, with our boat tied to the pontoons, our gearboxes went into meltdown, so Fish the Deep’s charter boat found itself on a hard stand, with urgent repairs keeping everyone busy. Water temperatures dropped, the whales started arriving early and the dominant winter fish species began to bite. It was smiles once again on the faces of staff and fishers.

A recent weekend saw an awesome day on the water. The day starting by fishing for snapper in close on sunrise. The clients caught a few around 50cm as well as plate size legal fish. Travelling out to the 50-fathom area, amberjack, pearlies, tuskfish, teraglin and hussar made for a memorable day’s fishing. Praiseworthy jewfish were the catch of the day the previous weekend and mulloway were not going to be left out of the action, with three guests each reeling in a splendid jewfish at the same time.

While rain refreshed the lawns, it did not stop the fishing.

With yellow rain jackets donned by all, guests were rewarded with splendid samson fish and amberjack that were released. Maori cod and moses perch were added to the dinner menu. Gold FM asked Fish the Deep if we would we take some of their radio personalities out for a competition of ‘which announcer could catch the biggest fish’. With all on board, we headed for the open seas, and would you believe, it was the only day that wasn’t flat. A metre and a half of swell and 15-knot wind meant seasickness was the prize for many of the presenters, but the important job of catching fish was achieved and a lucky listener won a jet ski after guessing the victorious presenter.

Hard work, long hours and many satisfied fishers saw Fish the Deep win the Tourism, Hospitality and Events Gold Coast Business Excellence Award for the second time. We won the award in August last year and again in May this year. This is such an honour and makes the early starts, late nights and tough fishing days worth all the hard work. A big thankyou to all our customers, both those who continually return for an adventurous day on the high seas as well as the first-timers; you made winning this award possible.

The large knobbies are now chewing well off the Gold Coast and cobia will be joining in with the whale influx. ‘Til next month, keep those rods busy and enjoy the winter fishing.

Scott's charter business Fish the Deep offers half and full-day charters catering for novices to experienced fishers. Experience great marlin fishing in summer and those wonderful knobbies, kingfish and amberjack in winter. Check out daily catches on the Fish the Deep Facebook page.
Previous Coomera Houseboats customers get into the fish
Next Hosting Creek to Coast for epic nannygai action