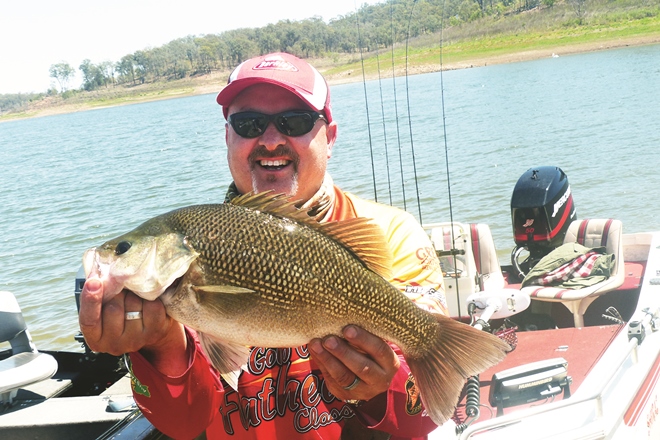 Patrick Conduit was the winner of round six at Boondooma Dam.

THE last Basstasstic qualifying round was held at Boondooma Dam in early October and competitors were keen to chase Boondooma bass.

A very good line-up of anglers attended the event. The park managers showed great hospitality and the weekend produced numerous big Boondooma bass. In the first round it was all about one angler who caught a whopping 906mm of fish including a huge 487mm to the fork bass. That angler was Patrick Conduit of Brisbane.

Two other anglers who measured in good bags were Terry Allwood of Wondai with 851mm and Steve Brooker of Hervey Bay with 848mm. The fishing conditions were tough, with some anglers not getting a point on the board and others finding honey holes that produced. In session two, anglers tried all sorts of techniques and threw everything at the Boondooma bass. The top anglers were catching bass by sticking to a pattern, and the anglers who stuck to their guns were at the pointy end all weekend.

At the end of session two and day one, Patrick was still number one and in a very good spot to win the round. Day two was calm and he was able to stay out in front, going on to win with a record catch of 2542mm of bass. This was a huge bag, and second-placed Steven who also had a great total of 2481mm. In fact, so did third-placed Terry with 2414mm.

The Big Bass for the event was Patrick’s 487mm to the fork fish from session one. Patrick won $380 cash and an Evakool icebox in addition to his prizes for scoring first place. The best female angler was Cindy Schloss of Dalby with 1893mm of bass. She took home a soft plastic lure pack and leader.

In the junior section, first place went to Lane Thompson of Gladstone with 1208mm of bass, which saw him walk away with a Shimano reel. Second place was taken out by Max Fien of Boyne Island with 988mm of fish earning him a Shimano rod. In third was David Nowland of Monto who took home two Smak spinnerbaits.

Anglers who made the top 30 spots over the year now have the chance to fish the grand final at Cania Dam from November 19-20. Thank you to all sponsors. To get involved, visit www.basstasstic.com