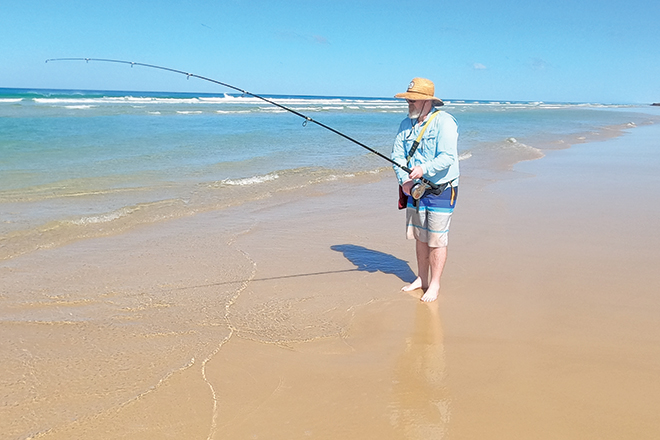 Though it is so much more than that. Planning a K’gari Fraser trip

The sand-flats fishing on the western side, and at times the fishing at Sandy Cape, is very hard to beat for quantity and quality of a variety of fish year-round.

Add to that the natural beauty of the place and the freedom to drive along much of this beach and it truly is a very special place for anglers.

It is for these reasons and more that my friends, brothers and I have been fishing the island for 26 years now.

We have learnt plenty about the island’s fishing in that time and for the past decade have reported on our trips and tips through my Facebook page ‘Ontour Fishing Australia’, as well as through this magazine.

So, this month I thought I’d share some tips on what you can catch and when, what to take, and how and where to fish when you are there.

Time of year
While K’gari fishes well year around, there are definitely a couple of seasons that are better than others, depending on the fish you’re chasing.

For the dedicated beach angler, tailor fishing is at its best from late July through to early October.

The timing of the schools varies a little year to year, though smaller schools can arrive as early as late May at the southern end of the beach from North Point through to around Yidney Rocks.

Though June and certainly July are better months if you’re keen to chase them and can’t make the peak times.

Tailor schools tend to thin out later in the season, however the quality improves into September particularly, into October and even November.

For those chasing whiting off the main beach, whiting fishing is best around May to June.

You can pick up some thumpers during this time.

Bream and tarwhine as well as the mighty mulloway are also best targeted in cooler months, with June to September ideal.

Dart – for those who don’t mind chasing them – are available year-round but can be a pest to anglers chasing whiting during the middle of the day in tailor season.

September October can see some great albeit rather crowded fishing, as anglers chase bigger tailor, the occasional pelagic and the usual rock species.

I’ve also had great mixed-bag fishing of drummer, bream, dart and even a few tailor in January off the rocks at Indian Head too.

For sand-flats anglers, whiting reach their peak in August September on the western side and far southern – Hook Point – and northern – Sandy Cape – ends of the island.

Flathead have a slightly longer peak season, coinciding with cooler water from late June to September.

Sean caught the fishing bug bad one very cold Canberra day 20 years ago when he was bored and picked up and read Angler's Almanac by the fireplace. Since then he has filled his mind with knowledge from fishing magazines, books, the internet, TAFE fishing courses, guiding fishing charters (estuaries, beach, bay and mountain lakes) and of course 'on water' experience. He and a group of mates formed a social fishing club and soon started to share what they learnt and caught online. Sean is the admin for Ontour Fishing Australia on Facebook, which is a page that shares information, reports and sponsor giveaways and welcomes all to the site. He plans to move into blogging on his new website when time allows.
Previous Noosa – weekly fishing report
Next Great prize pool at VMR Bundaberg Classic