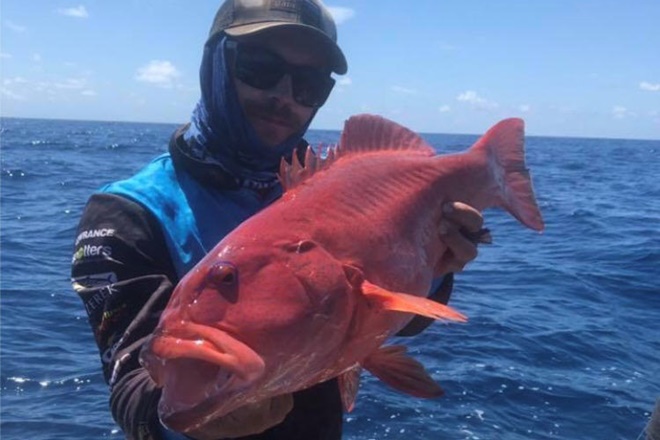 Klint Beer with a stonker trout he caught off Bundaberg last weekend.

Plenty of life on Bundaberg reefs

The forecast for this weekend for the Bundaberg area is a weird one.  It looks like on Saturday we are going to experience some SW winds and it seems there might be a short window of light winds before midday.  However, it pays to check the updated forecast before heading out.

The Five Degree and the Fifteen Mile will be your hots spots. With the full moon falling on Friday night there should be some fish on the chew.  Your grass sweetlip, snapper and Spanish mackerel will be the most common fish.  If you come across a school of yakka it’s always a good idea to throw the bait jigs on and try to get some fresh/live bait. The bar cheek trout and red emperor love them out there.

The inshore reefs should have plenty of life on them this weekend with the big full moon tides.  There’s been reports of Spanish, school and spotted mackerel being caught all up the coast.  The schoolies and spotties have been captured mostly on 50g Flasha Spoons and lightly weighted pilchards with 60lb leader. Stay away from the wire.  The Spanish have been mostly caught on live baits floated near the surface. You’ll find you might be rewarded with an unlucky stonker snapper while fishing this way for mackerel as well.

The Burnett has been fishing very well for your flathead.  Almost all of these have been caught on your smaller sized Zman and Gulp soft plastics.  Also there’s been some awesome sized mangrove jack being caught.  They are mostly being caught on rock bars with Jackall Squirrels and Lucky Craft Pointers hard body lures.  Fishing the tops and bottoms of the tides will be smart with the thought of the big full moon tides ripping through the river.  Keep in mind the afternoon tides are smaller.  Chucking some crab pots in will be well worth a go with a few muddies starting to turn up!

The Elliot should fire up this weekend!  These big tides are going to stir everything up so it will be well worth a look.  There should be good numbers of summer whiting on the chew on both the day and night incoming tides.  Beach worms and fresh yabbies will be by far the best baits.  There’s still been good captures of mangrove jack in the upper reaches.  Fishing the start of the outgoing tide has been the hottest bite.

The Baffle and the Kolan systems have been fishing awesome for a couple of weeks now.  The standout capture has been the mangrove jack!  Guys have been smacking them at all stages of the tide.  The standout plastic has been the 3” Zman Minnowz.  There has also been plenty of by-catches including grunter, flathead, bream and cod.  Sitting in the deep holes at night with big livies has been rewarding anglers with great captures as well.  Not to forget about the good numbers of summer whiting that are being caught.  They are mostly being captured at night on fresh yabbies and beach worms.

Lake Monduran is still firing on all cylinders!  Plenty of barra are being caught in the early mornings and late afternoons.  With the Golden Barra still not caught, it’s even more exciting than normal when you get smashed by a barra!  The Jackall Squirrels are still the standout lure!  Don’t forget to fish the points that the wind is blowing into.  It surely changes your day when you find that perfect wind-blown point.

Till next time, keep it real