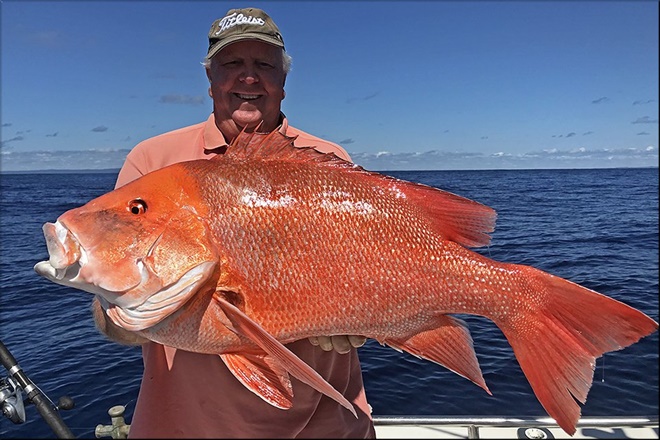 Time to get offshore on Sunshine Coast

Finally we are starting to see a few days that have allowed the guys to get offshore and amongst the action. Currently between moons the currents in close have been lighter so fishing has been a bit tougher. Those guys who made the effort got some great fish. Out wide at Double Island the currents were stronger but the catch list made up for it with red emperor, snapper, trevally, cobia, tusk fish and coral bream to name a few species. If headed out there be sure to carry 16oz snapper sinkers or greater so your baits don’t get dragged off the reef. Don’t forget to take a look at the deep drop sinkers too if fishing heavy 50-80lb lines. In closer around Sunshine reef we have seen a mixed bag of sweetlip, coral trout, estuary cod and smaller snapper. These fish taking lightly weighted gang hooked pilchards and double hook paternoster rigs fished with pilchard and squid baits. Along the halls reef stretch toward Teewah the birds have been smashing the bait balls so be sure to have a few slugs and stickbaits in case there are tuna and mackerel hitting these schools.

The estuary has been fishing well especially in the lower parts around the dog beach and along Gympie Terrace. If targeting flathead with live herring then smaller Mustad Ultra point hooks are the go. For the soft plastic angler try using Zman Streakz Curly Tail in the 4 inch size and Entice 3 inch Paddler in red glimmer. Another great way to pick up a flathead is to use deeper diving lures especially if in a boat. Great options to use are the Zerek Tango Shad and the new Rapala Jack deep lures with 10lb fluorocarbon leaders. Whiting and trevally are making their presence known around the dog beach, river mouth and Lake Weyba and Gympie Terrace. Besides using fresh beach worms, these fish are a great target species if using surface lures. Be sure to keep your lure on the move and fish over sand flats during a run out tide. Everyone’s favourite summertime fish, the mangrove jack is coming out to play with mullet strip and live baits working well. These fish like to hang out around structure and bridges. Be sure to use heavier lines of at least 15lb to stop these fast running river brawlers.

The surf has been becoming lower and the winds early morning and late evening have been the best time to cast a line. We still have some great gutters all along the coast and for the majority of anglers the catch list includes dart, bream, whiting, flathead and the occasional tailor. Using light rods and line is the fun way to tangle with these fish and 1-5kg estuary rods and 6-10lb lines makes casting easier. Make sure you carry a few 15-20g slugs in case the birds push the bait schools in close enough to the breakers as there could be trevally and tailor feeding.

Freshwater has been harder to fish with the wind but the early morning bite has certainly produced some great fish. Both saratoga and bass are becoming increasingly active in both Lake MacDonald and Borumba Dam as we head toward hotter daytime temps. Using smaller surface frogs, Zman hardlegz frogs on weedless hooks working very well with 12lb leaders in low light. Hardbodies cast toward the lilies and cranked out is producing fish as well as smaller Ecogear ZX blades and soft vibes fished in the deeper sections where the fish are schooled up.