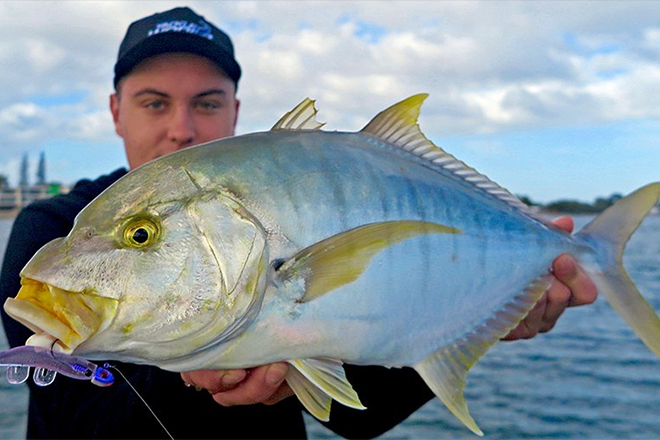 Jack Beeson from Davo's Tackle World (above) caught and released some thumper golden trevally and GT's in that area on soft plastics on Saturday. Photo: fishingnoosa.com.au

With offshore condition pretty tough last weekend plenty of anglers concentrated their efforts on  Noosa River species. Good sized trevally have been coming from around the Coast Guard boats near Munna Point as well as Inner Woods Bay and the Noosa Sound.  Surface presentations have been the way to go with smaller surface walkers like the River2sea Scum Dogs and Surface poppers like the Lucky Craft GSplash. Smaller golden trevally and tea leaf have been throughout the river eating 3 inch plastics and small vibes like the 6cm Entice Assaults. Tailor are taking live and dead baits, with the river mouth and the sand bags in the low light periods your best bet.

Bream are in good numbers in the river as the water temperatures drops. Small grub pattern soft plastics or lightly weighted flesh baits have been fishing well around structure like bridges and pontoons. Flathead are in great numbers with many fish well over the legal limit, these big breading females are protected and are vital to the sustainability of the fishery. So take a quick pick for the brag wall and release ASAP. Flathead are also one of those fish that plastics anglers love. If you are in the boat, drifting slowly down the edge of a banks fishing prawn profile plastics seems to get the results. For the whiting anglers Gympie Terrace, Frying pan and Dog Beach have all been producing. Live worms, yabbies or peeled prawns on size 4 bloodworm hooks with a running sinker seems to be the most productive tactic.

Offshore the angler out of Noosa have still seen the odd mackerel even though the water temperature have starting to drop, Halls Reef has seen some nice spanish mackeral with most caught on live baits. North Reef has also seen spanish and spotted mackerel on pilchard and live bait floating presentations. On the bottom at north Reef, Snapper and pearlies cod and spangled emperor have also been caught. Snapper can be targeted a number of way but a favourite has to be with soft plastics, there are a number of colours that work well, Coconut Ice and Nuclear Chicken colours seem to be very productive.

If you venturing to the deeper reefs with that bit more run try using Elevator Heads for your plastics from Berkley, these heads come in a couple of colours with different weights and sizes and are perfect for those deeper reefs. Sunshine Reef has been the spot for coral trout. Live baits fished hard on the bottom has been the best approach.  Heading up North; the reefs east of Double Island Point have seen some great fish hitting the decks including jew, cod, snapper, pearlies and cobia.

On the beach; we are starting to see some good schools of tailor moving up the eastern beaches with the low light period, prime time. Big Jewfish are starting to make a show and caught on big dead baits including Mullet fillet, tailor fillet and squid. Good sized bream and dart have been taken on live worm baits around the Peregian Beach area. Tailor and dart have been in good numbers south of the first cutting on Noosa’s North Shore Berley on the beach is also important, small pieces of prawns, pilchards or whatever bait you are using dropped into the wash will help to attract fish within casting distance.

In the freshwater; bass have been congregating around the weed edges of Lake McDonald and Borumba, these fish will become a little more lethargic as the water cools and tend to school in thermoclines in the deeper water. Fishing early morning and late afternoon should still see a result.  Give deep diving lures a troll around the deeper sections with green seeming to be a favourite colour. Lucky Craft Sammy 65 and Jackson Risk Bait Walker around the weeds, and the new Dart magic lures around the bubble trail and deeper drop offs.