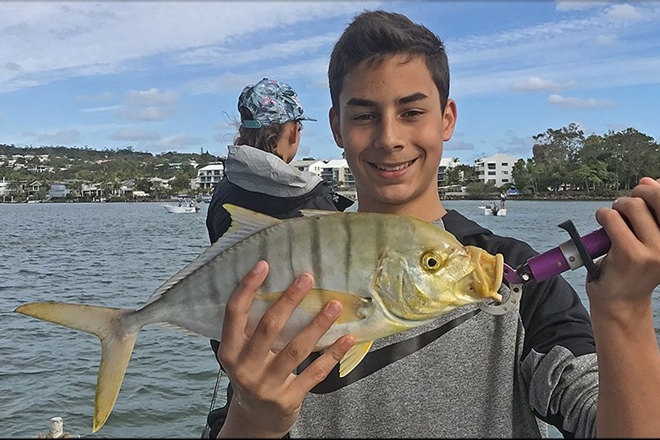 Plenty of quality fish coming from the Noosa River

The Noosa River has again come up with some great fish for angler unable to get outside due to weather! There are still good numbers of trevally in Woods Bay early in the morning, tailor are also amongst them with surface lures like the River2sea Skinny Dogs working well. Mangrove jack are in good numbers in the upper reaches of the river, getting up early and heading up the river pitching hard body lures at the banks is a perfect way to target these fish.

Give the Lucky Craft Pointers a go, these suspending lures are perfect for chasing jack on the baitcaster, using a baitcaster outfit will give you the pinpoint accuracy you need to get close to the snags where these red devils love to live. Elsewhere in the river, there has been some good size whiting getting caught in the shallows of the frying pan and Weyba creek, prawns worms and yabbies have claimed quality fish. Good flathead have also been inhabiting areas like Weyba creek and the sandbanks and drop off down towards the river mouth. Brightly coloured soft plastics or diving hard body lures have claimed some great fish. Crabs are also plentiful in the upper reaches of the river, remember you can only take the bucks and they must make size, 15 cm across the widest point of its carapace.

On the beach the dart have been in good numbers. This is great fun for the kids with a small piece of pilchard or a prawn on a size four bait holder hook cast into the gutters will almost guarantee a fish. The gutter on the Noosa North Shore has also seen some quality tailor and some bigger sized flathead, with the early morning high tide there should be a bigger jew around as we move into the new moon phase. Fishing Noosa National Park has seen some good action coming from around the headlands, small tuna have been in numbers so casting stick baits and slugs has been popular, tailor and trevally have been in the white water and have also taken a liking to the those slugs, give the Arma Metallic and Radico slugs a go.

Fishing Offshore last weekend was tough with conditions less than perfect for chasing reef fish and pelagics. For those boat that managed to get out, there is still good numbers of fish. Spotted mackerel and the odd Spaniard were showing up on the closer reefs and in Laguna Bay, with the majority of the action being around bait schools. Trolling hard body lures is a great way to cover ground while you are making your way to your favourite fishing ground. When you pull up, the good old pilchard floater has been working well with most of the pelagics swimming mid water.  Another species of fish that is hanging around the bait schools are long tailed Tuna. These fish are a great test for anglers and can really stretch the arms. Sunshine Reef is starting to fire with trout and sweetlip. Chardons Reef is also holding good sized snapper cobia and good sized jew. Double Island and North Reef had some good captures earlier last week with snapper, maori cod, pearl perch, jewfish, cobia and tusk Fish all accounted for.

In the fresh the fishing is a little tougher with the bigger schools tending to be in the deeper parts of the dams. In Lake Macdonald fishing around the bubble trail has seen some good fish Blue Blue micro jigs and small spinner baits working well. On the plastics front the 3” Berkley Swimming Mullet plastics on 1/8th jigheads has also claimed some good fish. Borumba has also seen the bass sitting deep along the float line and around the entrances to Yabba and Kingham arms of the dam. Vibes are always worth a go with the Entice Assault Vibe and Ecogear ZX35 blade perfect for the job.