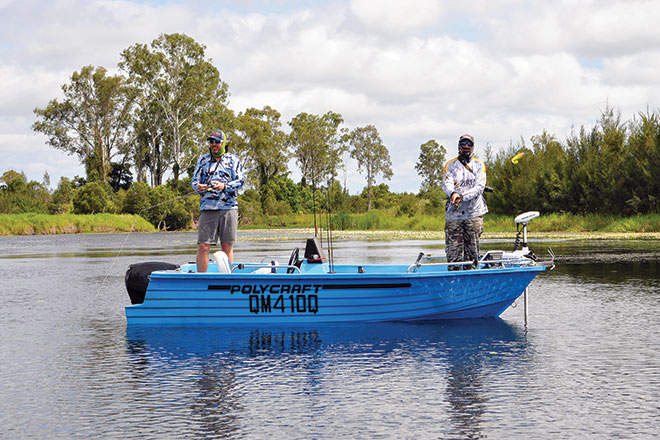 There is ample room to fish two luring anglers.

Polycraft 4.55 stands the test of time

I RECENTLY had the chance to spend a weekend away with editor Ben Collins and check out his Polycraft 4.55, a boat he has owned and used for about 10 years.

This piece will tackle a few questions about why Ben chose and continues to use his Polycraft, given he has access to almost any boat on the market. It will also contain some of my thoughts, having spent a few sessions fishing in his rig.

Let’s start by talking about the boat – what it is, what it does and, most importantly, its limits.

SB: Ben, what model of Polycraft is your boat and when did you buy it?

BC: It’s a 4.55m Polycraft Quickcraft side console, which is now called the 4.5m Drifter and I got it about 10 years ago.

SB: There is always a primary use for any boat – what did you envisage as this boat’s primary use?

BC: At the time, I wanted it for lure fishing in Moreton Bay.  But I wanted a versatile boat that could easily lend itself to a few different fishing applications, and one that could tow tubes and wakeboards around behind it.

SB: Does the boat still get used for its primary use?

BC: Absolutely.  Moreton Bay is still where it is used the most. Though last winter I also used it to sneak up almost impassable mangrove creeks off the Proserpine River while crabbing, and then we trolled lures for barra and threadies as the run picked up, and then we flicked lures for barra while using the electric motor.

And later that day, we ran offshore to another tributary to relocate the pots, before doing some bait fishing. It’s a very versatile boat.

SB: What has been a strong point of the Poly? And with that in mind, what has been the weakest point?

BC: It’s a really tough boat.  The build quality is excellent.  It is awesome having a boat that you can run up on a ramp or the areas beside a ramp and not have to worry about damaging it. If I am fishing by myself, or just have the kids out with me, it is great to be able to nudge the bow of the boat up the ramp or beside the ramp and not have to stress about hitting a submerged rock or gravel.

If you do hit it a bit hard, you might have to file the areas of impact to smooth them over again, but considering the punishment my Poly has received over the past 10 years, and keeping in mind it was mostly stored uncovered and outside for the first three years, the hull still looks pretty good.

In saying that, it is an open boat, so when you are running beam-on to the chop you do get a bit wet, but that is a trade-off you must make when you have 360 degrees of fishing room.

SB: I was impressed with the way this boat handled smaller waterways while two-up and casting lures. It was comfortable, roomy and easy to manoeuvre. How does this rig go in larger waters such as Moreton Bay?

BC: At the time I bought my boat, a couple of fishing mates Jason Bird and Keith Stratford both had the 4.1m version, which had a flatter bottom and was a little more stable at rest.  Both gave good feedback regarding their Polys, however, as I planned to fish Moreton Bay I wanted something with a sharper entry to cut through the notorious bay chop so I went for the 4.5m version.

I’ve been out in pretty average conditions over the years and the Poly has proven itself time and time again. It has a very different ride to a tinnie and even a glass boat. It flexes and moves a little but I think that is part of why the ride is so soft. I have to admit I do drive it hard and my fishing mates can attest to that.

SB: You’ve owned this boat for nearly 10 years, how much have you spent on maintaining the hull?

BC: Nothing! I always give the boat a hose down after a trip out, and depending on what I have been doing, it will get the high-pressure hose and some truck wash or just a hose and wash down.

SB: Polycrafts are relatively heavy for their size; has this impacted on your fit-out choices in any way?

BC: It is heavy, and I did take this into account when fitting it out. I’m a big fan of having heaps of storage and clean fishing space, so while I haven’t gone over the top in decking it out, I think I have the right mix and balance.

At the bow, I’ve extended the casting deck by about 70cm so two people can easily fish there. My side console setup is a little different to the normal ones as I have moved the seats forward. Traditionally, the seats in the side console are right at the back, but I’ve made a rear casting platform and put the seat from the Frontrunner model in my boat.

This way I get decent-sized front and rear casting platforms and still have room to put an Esky or two in the boat. I’ve strapped a 70-litre Evakool Esky between the two seats, which acts as an extra seat but is also stable enough to stand on. The seat bases have storage under them too, which neatly fits my tackle trays.

SB: What is the most impressive thing on your Polycraft?

BC: The sounder setup for sure. I have a Lowrance HDS-12 at the helm and a HDS-9 at the bow.
This may seem a little over the top for a boat of this size, but it improves my fishing results.

SB: If you could change one thing, what would that be?

BC: There have been a couple of changes to the standard model since I got my Polycraft, which include splitting the lid and front hatch storage compartment.  This would improve access and keep gear a bit more organised in my boat.

The stern on the newer model incorporates a small engine well, which would give a bit more protection from the waves and keep water out of the boat. I guess I’d change my Poly to have these features of the newer model.

BC: It’s good for all of them. I can be flicking topwater lures for bream in a foot of water and then run up the bay and chase cobia or mackerel on live bait and lures. The side console means I can basically fish for anything and still have room for a decent size Esky. I can’t run as many whiting rods out the back as some open boats when chasing whiting on bait though.

SB: What modifications have you made to the hull to assist your fishing and boating?

BC: I haven’t made any. I keep the boat on an RM Trailer with skids, as the guys at Polycraft recommended when I bought it. It’s not your traditional drive-on/off trailer, but I can drive the boat on, which makes retrieving it easier.

SB: What sort of depths can this rig run in, both at speed and while fishing?

BC: Because it’s relatively heavy, you do need a bit of water. I can get away with about 60cm of water when on the plane but obviously more is better. The hull is tough though, so I’m not usually too concerned if I hit or rub the bottom when fishing ultra-shallow waters.

I have had to hop out a couple of times and give it a push but generally if there is enough water to use the electric I’m fine.

SB: Would you recommend a Polycraft and for what style of fishing?

BC: I would definitely recommend the Polycraft range. I have been in many of the smaller Polys of 4.8m and under and all the owners seem happy with them and I’m still happy with mine. You can choose how to set your Poly up, so you can make it work for whatever form of fishing you like.

I chose the side console, but others might prefer the open tiller model, which has plenty of space.
I’d recommend outfitting with the maximum horsepower (60hp on my boat) due to the solid build, especially if you’re planning on kitting out the boat.