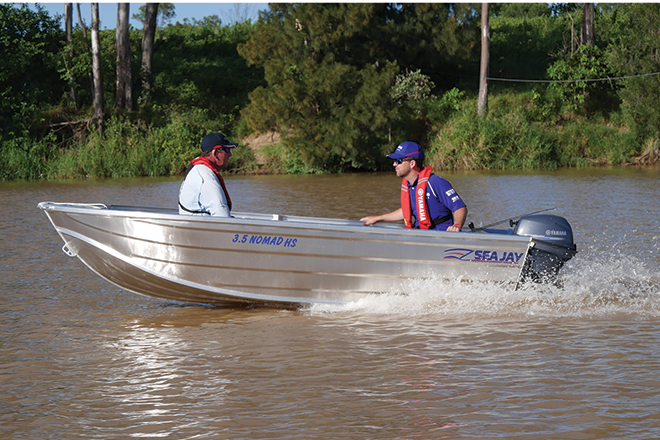 The 9.9hp Yamaha had ample poke with two on board.

AS much as I enjoy heading offshore in a large, well-appointed fishing rig, I was recently reminded how much fun it can be to dart around enclosed waterways in a small tiller-steer boat.

Whether a flashback to my youth where I spent a lot of time in small tinnies, or just the river rat inside, I had a very enjoyable time grabbing hold of the tiller and going for a blast.

On this occasion I had the pleasure of testing two Sea Jay Nomad HS tinnies, with the HS standing for high side. As the name suggests, these boats are deeper than your traditional Nomad, though it would still be possible to use both models as car toppers (on this occasion they were on trailers). Where and how you plan to use your Nomad would determine which model you go for.

If you want it to double as a car topper for use in the Northern Territory or northern Queensland as well as a crabbing and fishing boat in local waterways, I would opt for the HS version. The higher sides gave the impression of being in a much bigger boat that would handle more adverse conditions.On the other hand, if you were planning on visiting more sheltered inland or southern waters, the standard version would be more than adequate.

Both the test boats were fitted with portable Yamaha four-stroke engines, with the 3.5m (dry weight 71kg) getting the 9.9hp and the 3.7m (88kg) adorned with a 15hp outboard. With the current phasing out of high-emission two-stroke outboards, you need to start considering alternative outboard motors for smaller craft. This phase-out will have a big impact on car topper ranges because the traditionally lighter two-stroke outboard was the popular option.


But with technological advances, two-strokes are not necessarily lighter than modern four-strokes. This is highlighted by the range of portable Yamaha four-strokes, which are becoming increasingly lighter and torquier.

When run over the scales, the portable Yamaha 9.9hp four-stroke comes in at about 40kg (add an extra kilogram for the long shaft model), while the 15hp weighs a touch over 50kg.

If you are using these outboards to power your car topper, you have several ways to stow and move them with ease. Some setups see the engine riding on the roof with the boat, with the whole lot lifted by a manual or electric winch, while others mount their engines on a trolley, drawbar or rear bar of the car or van. And for this sort of use, these portable engines from Yamaha are leading the way in the smaller horsepower range.

Another advantage of four-strokes is you do not have to mix oil with your fuel.Gone are the days of having to work out how much oil you need to add to a partially full tank of fuel. The four-strokes also run a lot quieter and don’t have that traditional two-stroke oily smell when under way.By running these quieter and less-smelly engines, your time on the water will be more enjoyable and you will be better able to appreciate the beauty of nature.

But enough of that, what you really want to know is how they performed. Well the answer is “awesome”, with some surprising data from the 9.9hp considering its smaller displacement. Yamaha Motor Australia puts its engines through real-life testing and documents the results. The beauty of this is you know exactly what an engine will do on a specific boat in certain conditions.

This sort of data is perfect for consumers who are considering an engine for their boat because they can see exactly what sort of performance they will get out of it. As mentioned, the results for the 9.9hp were a little surprising, as it had a top speed of about 36km/h when paired with the Sea Jay Nomad 3.5, which was only 3km/h less than the bigger-displacement 15hp on the Nomad 3.7.

Given, it was on the slightly smaller and lighter 3.5m boat, but as noted earlier, there isn’t a huge difference in weight. Darting around at these speeds is enjoyable and also means you can travel longer distances more quickly and have a bigger range with proven fuel efficiency. At the other end of the spectrum, both boats travelled at 4.2-4.3km/h at 1000rpm, which is an ideal speed for trolling up some flatties.

It was at these low speeds or idle when you really noticed and appreciated how quiet the engines were, as you basically had to double check if they were still running. While the phase-out of high-emission two-strokes has pushed outboard manufacturers to deliver powerful and lightweight four-strokes, I think it is consumers who will benefit most, with boat and motor packages many will be very happy with.

For more information on the range of Sea Jay boats and to find a local dealer, check out seajay boats.com.au
Similarly, for more on Yamaha’s range of portable four-strokes, visit www.yamaha-motor.com.au

And be sure to check out the video below to see these boats and motors in action!