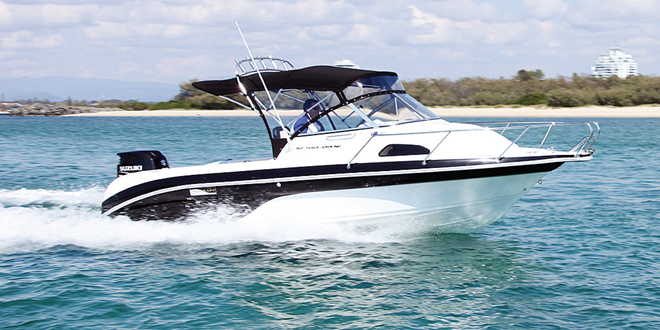 TOWARDS the end of last year I took a couple of the Procraft fibreglass boats (the 5.8 Coastal and 6.2 Walkaround) for a run in the Broadwater. I previously reported on the 5.8 Coastal in the October edition of BNB (which can still be seen on our website at www.bnbfishing.com.au), leaving only the 6.2 Walkaround to review. Obviously it’s the larger of the two models, but while their names indicate there is only 40cm difference, this is definitely not the case when you take a look at the specs.

Stepping into the Procraft 6.2 Walkaround, you find yourself in a vastly different vessel with even more potential. With an overall length of 7m and a massive 2.5m beam, it has the foundation of quite a substantial boat. The layout, while neat and clean, has been kept relatively simple and clutter-free, which also adds to the spacious look and feel.

Designed more towards the fishing end of the scale with the walk-around feature, it does lend itself to also be a popular choice as a family boat. The large cabin area has plenty of room for an adult to lie down comfortably, so there is more than enough room to keep the kids entertained and out of the way.

Access to the cabin is via a large opening, making it easy for most people to use. This opening also ensures the cabin is well ventilated. Cabin layout has been kept pretty traditional, with standard large pockets running the full length and storage under the upholstered cushions.

At the helm, the overall style of simple and clean has been kept while allowing enough room for a good assortment of today’s larger electronics and gauges. These clean lines not only look good, especially with flush-mounted GPSs and sounders, they also make cleaning a breeze. The test boat was fitted with a bimini, clears and rocket launcher to store your rods. These items, which can be listed as optional extras from other manufacturers, actually come standard and are what make this boat more functional and complete. This way you don’t have to be spending extra dollars to get the boat the way you want it.

In fact the whole range of Procraft fibreglass boats come with a substantial list of options that are included in the price. So at $55,990 including a 140hp 4-stroke Suzuki, trailer and heaps of extras, you have an affordable offshore package that will be as at home on the wide reefs as towing a tube around in protected waterways. It is worth noting that the test boat was fitted with a 150hp 4-stroke Suzuki, so this will cost a little more.

Having said that, I was very impressed with the performance of the boat and motor package and if your budget can only stretch to the 140hp, you will still have a boat that performs well. I generally always preach about putting the maximum horsepower on a boat, as it will be there if and when you need it. However, this boat might just be an exception to that rule as I think the maximum horsepower of 175hp might actually be a bit too much for some people to handle, especially at full noise.

Obviously it all comes back to how and where you will be using the boat, but knowing that it performs well with a mix of engines does allow you to be a bit more budget conscious. To give you an idea of how spritely the test vessel was, it had a top speed at WOT of 73km/h at 5800rpm. It also planed around 3000rpm, which pushed along nicely at about 30km/h. Between these two numbers there is plenty of scope to find a good planing speed in whatever conditions you encounter.

These numbers can be partially attributed to the hull, which has a reasonably sharp entry and a deadrise of 22.5 degrees. But I also believe it is how well the engine was matched to the rig.

Overall, the Procraft 6.2 Walkaround ticks plenty of boxes with its stylish looks, finish, performance and price.

Another thing worth mentioning is that Procraft fibreglass boats are backed by a five-year fibreglass warranty from The Haines Group, which should instil buyer confidence. As well as this you are getting an Australian manufactured boat designed for our conditions.

Since my original test, there have been a few developments with the Procraft 6.2 Walkaround and it now also comes in a hardtop version. While I haven’t tested it, from the pictures it does looks very stylish and you should have excellent visibility. The hardtop adds a few extra dollars, but is well worth considering if you are keen on that look or style.

For more information on the Procraft 6.2 Walkaround or other models in the range, give the team at Coastal Powerboats in Burleigh a call on 07 5568 0904 or pop in and see them and check out these affordable and well-designed boats.