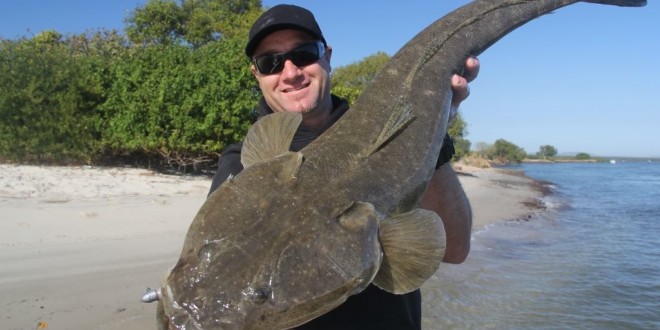 G’DAY everyone. Here we are at the end of another winter, with springtime meaning one important thing to estuary anglers and that is the opportunity to take advantage of one of the best times of the year for targeting flathead. This is the time when big female flatties are drawn from the bowels of the river systems and congregate around the lower reaches of the estuaries where they are met by large numbers of smaller male fish in order to spawn.

The dusky flathead (platycephalus fuscus) is the largest of all our flathead species and it can grow to a maximum length of 150cm. Although this would be rare these days, with any fish caught around the metre mark considered a trophy sized specimen. The dusky is distinguishable by the distinctive bluey black dot on its tail and a few darkish bars that run across the rear end of the fish’s back.

While the dot on its tail is a permanent mark, you will never catch a flathead with the same colour twice because they are the masters of camouflage and can change colour in order to blend in with their surroundings. If you also take into account that they have eyes on the top of their heads for bilateral vision and a large mouth matched with an ability to strike with a lightning burst of speed, it makes the dusky an amazing ambush predator.

Unlike most fish that have to continuously swim around in search of their prey, flathead prefer to lay on the bottom in a strategically placed position to wait for prey to come to them. Flatties could never be considered fussy fish when it comes to their gluttonous dietary intake and will strike out at anything that comes into their zone, making them a great species to target.

Locations
Some of the best locations to find them are along the fringes of seagrass beds and around the edges of sand and mud banks.
Deep channels that run between sandbanks are other preferred ambush places, as are deep holes. The sandy spots between broken reef areas will also hold fish as will across the front of feeder creeks and drains.

Times and tides
Flathead can be pursued on any tide but my favourite is on the first couple of hours of the run-out.
The significance of this period is in relation to the flatties knowing baitfish that might be harbouring in shallow areas on the top of the tide may be forced to retreat back into deeper water as the tide drops. Some examples of this could be small baitfish and crustaceans that often seek refuge in a seagrass bed or over the top of a yabby bank being left with no choice other than to retreat back into deep water with the falling tide because on some occasions these areas will become totally exposed. The run-out tide will often force bait that may be lying in feeder creeks and drains to return to the main channel and it makes perfect sense that the mouth of these spots is an ideal place for flatties to wait and hunt.

Bait fishing
I have already discussed that these fish are random feeders and will lash out at anything, but there are some stand-out baits that a flattie just can’t ignore, with the first of these being whitebait and frogmouth pilchards.
Both these baits can be cast out and left static but to achieve better results, try drifting them behind the boat with the tide or you can cast them out and retrieve with a slow stop-start action that makes them seem more lifelike.
Live baits such as herring and mullet are also top performers, with the small poddy mullet being my first choice as they are easier to keep alive than herring and at times the bream smash the herring before the flatties get the chance.

Soft plastics
It would be a fair bet these days that plastics are the biggest selling lures for anglers in pursuit of flathead and fair enough as they are easy to use and fish can’t resist scoffing them. There are numerous variations when it comes to the correct technique for using plastics but I usually stick to a very basic pattern that gets great results. My system involves giving the tip of the rod three one foot lifts and then letting the lure sink, taking up the slack line and then repeating this rhythmic action.

Just about all the strikes that occur when using plastics come when the lure is falling back to the bottom, so for this reason I always have my rod tip around eye level and vigilantly watch my line ready to take up the slack in order to put instant pressure on the fish’s mouth. Another technique

you can try outside the normal cast and retrieve pattern is a simple one that I have nicknamed tea bagging.

Tea bagging is based on fishing the deeper holes where I locate bait on my sounder and positioning the boat directly over the top of it. I commence the same three short lifts as mentioned but instead of winding the lure up, I keep bagging it until the boat drifts off the mark.

Flatties do not show up on sounders as they are snuggled into the bottom, but in many instances they will be lying under these bait schools. There are hordes of different plastics to choose from that will work well but a couple of my favourite brands are Damiki and Z-Man with a couple of my favourite colours being Pink, Green, Pumpkinseed and any of the Motor Oil colours.

It is also important that you start a collection of different sized jig heads to match the different sizes of the plastics as well as the variety of head weights. Lighter weighted jig heads are the order for working the plastics in shallow water and obviously you will need to draw on a heavier head if you were to get the plastic to the bottom in deep or harder running water. The TT brand of jig heads is always my first choice as they are quality made and have a big range of models to match any condition and technique.

Blades
These little metal lures put out an amazingly tight but intense vibrating action that appeals to all species including of course flathead. Apart from their great action, they sink to the bottom and into the flatties’ strike zone quickly because of their weight. You can fish these lures in the same areas with the same action as the soft plastics, or every now and then mix it up and try giving the rod tip just one lift instead of three hops and at some stage you will draw a reaction strike. The blades that work the best for me are the Switchblades, Cyber Vibes and Vaults with my most consistent allround colour being anything that has some form of gold on it.

Hard-bodied minnows
These lures are once again a must-have in any flathead angler’s arsenal but there is a golden rule that applies when using them. It is vital that you match the lure’s depth rating to the exact depth of water that you choose to fish. The reason for this is that flatties just can’t resist smashing a lure that regularly taps into the bottom, as every time the lure smacks into the dance floor it brings up a puff of sand, shell grit or mud and the flatties instinctively zero in on the lure thinking that it is a foraging baitfish.

I firmly believe that this action is more important than the swimming action or even the colour of the lure in creating reaction strikes. These lures can be cast and retrieved from the shore or boat and they work incredibly well when slow trolled, particularly when used along the fringes of seagrass beds and drop-offs. It is important to note that because the lures will be bouncing off the bottom, at some stage you will pick up some form of contaminant like weed for example that will foul up the lure’s action.

The sure-fire way to detect a fouled lure is either a lack of vibration from the rod tip or no vibration coming through your line, and in the worst cases your lure will come to the surface. It can also be an important detail, whether you choose to cast or troll, to always keep your rod tip close to the water because this will help the lure to dive to its optimum depth.
Some of my favourite hard-body minnows include the Lively Lure Micro Mullets, Pontoon 21 Crack Jacks and Greedy Guts, Strike Pro Bass-X, Skagit Diving Beetles and O.S.P Dunks because they are small lures that dive deep, and of course my own Li’l Mates and Diggas.

Handling and care
It is vital that we as anglers take the time to protect this terrific species to the best of our ability and obviously as with all fish we should only take just enough for a feed. NSW DPI Fisheries has conducted a study on flathead with the result being that flatties had a 96 percent survival rate if handled and released correctly. This is great news and a few of the recommendations from the report are to use rubber or knotless mesh landing nets and not to lay the fish on hard or hot surfaces.

One of the biggest components is to always try to handle the fish away from their eyes and gills and return them to the water as quickly as possible.

So folks, grab that great photo and shoot them back and I look forward to talking to you all next month.

Smithy has been working as a full-time professional fishing guide for over 20 years, which makes him southeast Queensland’s and northern NSW’s longest-serving guide. Above all the commitments Smithy has in the charter industry, his overriding passion has always been to pass on his specialist experience to anglers and teach people of all ages and angling abilities the correct techniques required to catch all the Gold Coast’s estuary species on a variety of different lures. Smithy’s unique charter operations guarantees you will catch fish on lures or you don’t pay.
Previous Refinements to Bluefin 4.8 Barracuda
Next Procraft 6.2 Walkaround review