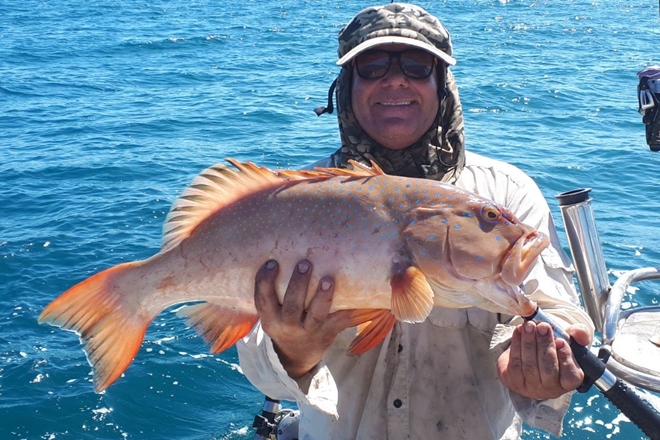 Matthew Trims with the 70cm coral trout he caught on the Northern Gutter recently.

Even though the Bundaberg region has received some welcome rain and most of the rivers and creeks are running a little fresh, plenty of quality estuary species are being caught.  The rock walls from the mouth down to Kirby’s Wall are still producing some nice bream, mangrove jack and estuary cod.  Mud crabs have really fired up since the rain and will be a fantastic option this weekend.  Also, it shouldn’t be too long before we see a good run of prawns back in the Burnett River.

Once again, both the Kolan and the Baffle systems have become a little dirty due to the recent rain.  Around the mouth in the slightly clearer water, queenfish, dart and whiting have been active.  A few prawns have showed up but crabbing should be on everyone’s to-do list as there has been some cracker mud crabs caught in both systems.

There is a good number of dart and whiting to be caught at the mouth of the Elliott and along Coonarr Beach.  Further upstream in the Elliott around Shark’s Nest, some quality estuary species such as barramundi, mangrove jack and bream have been responding well to lures and well-presented baits.  Once again, the Elliott will be well worth a crack for a few mud crabs and prawns while the water is slight off-colour.

My son and I were fortunate enough to spend a few magic days on Fraser Island last week.  We had a ball catching plenty of nice dart, bream and whiting on the east coast from Orchid Beach to Indian Head.  Fresh beach worms and pippies are the gun baits at this time of the year.  Fraser is an awesome spot to spend a few days and I don’t think it will be too long before we will be going back there.

The good news for the barra anglers is that not a lot of water has come into Lake Monduran and the water levels have remained stable.  The barra are finding comfort back up in the shallows with Rapala Shadow Raps, Lucky Craft Pointers and weedless soft plastics accounting for plenty of barra.  Anglers trolling in the Main Basin with lures that dive between two and three metres have also been doing well with barra up to the magic metre mark.