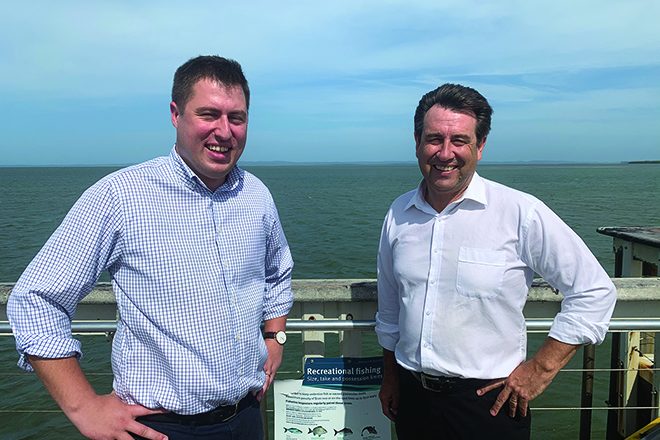 A REDLANDS Coast political team is pushing for additional artificial reefs including an inshore reef off Wellington Point.

Member for Oodgeroo Dr Mark Robinson and LNP candidate for Redlands Henry Pike are determined to see more reefs delivered, starting with the Point. “I will keep fighting for an inshore reef off Wellington Point and aim to deliver it should the LNP win government this October,” Dr Robinson said.

Funds were axed in the government’s final budget for a new Wellington Point artificial reef. Mr Pike joined Dr Robinson in the ongoing push for development of these reefs across the waters of Moreton Bay. As part of the current review of the Moreton Bay Marine Park, Mr Pike is calling on the government to build more artificial reefs to create a more sustainable fishing future. With artificial reefs off North Stradbroke Island and west of Peel Island, the addition off the Point would be welcome.

“Artificial reefs take pressure off natural reefs and create more sustainable fishing opportunities for anglers,” Mr Pike said. “I would like to encourage the state government to continue to build new artificial reefs in Moreton Bay as a value-adding measure, rather than using their previous approach in which recreational fishers were given artificial reefs with one hand, but had fishing areas taken away as lock-out zones with the other.”

(Content supplied by the office of Mark Robinson MP)