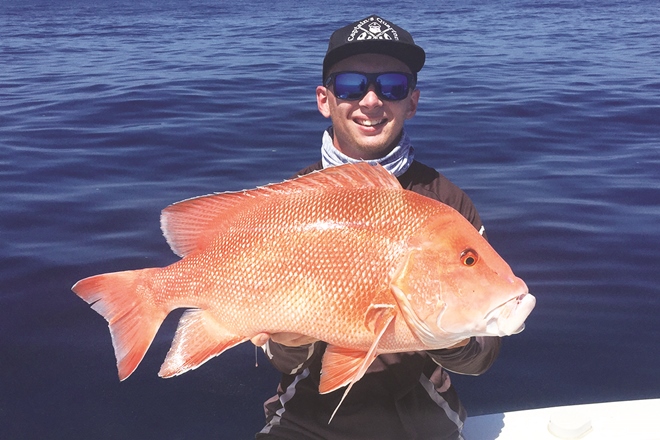 The author landed a red emperor.

SUMMER is quickly coming to a close, but it certainly doesn’t feel like it. With consistent rain and lighter wind around central Queensland, fishos have been waiting for the small weather windows between the rain to get out and fish the blue water.

These weather windows have become increasingly uncommon in recent years, so it has been a welcome change. With this in mind, it was an easy decision for us to get out and make the most of every opportunity we could. Favourable tides and an abundance of bait in the local area made for brilliant fishing across multiple days, with both inshore and offshore producing quality fish.

Our first opportunity came with a forecast drop in the usual northeasterly wind. With plenty of storms around and not wanting to get caught out in the small weather window, we knew a short Keppel Island Group run was in order. We departed Rosslyn Bay Harbour on daybreak with one goal in mind: bagging a few spanish mackerel.

Knowing plenty of bait was around, we also knew good numbers of pelagics had to have followed. Our destination was the outer islands of Keppel Bay, predicting the deeper water was going to hold the desired target species. Upon arrival, we quickly noticed plenty of activity, with birds and bait schools consistently moving through the area, so we immediately deployed a trolling spread.

Whenever I chase spanish mackerel I make sure I have a broad range of options at my disposal, allowing for every possibility. It is important when targeting these fish that you observe conditions and change tactics to suit in order to get the bite. Trolling is my preferred method for targeting spaniards because it allows me to cover loads of ground to find fish. When trolling, I use a mixture of hard-body lures and troll baits to maximise our chances.

I run a spread of four lines, with each line positioned to target the different zones at which the fish feed. We made our first pass along the western edge of the island and within minutes marked a large school of what I suspected were school size spanish.

We held our line and as soon as our spread passed through, bang! A double hook-up with two blistering runs! I loaded up both my crew members and after 10 minutes we boated two lovely school-sized spanish of 6-8kg. We wasted no time dispatching them to the Esky and getting lines back in.

Cutting another few laps, we hooked up multiple times but were unfortunately unable to stay connected to any of them. After pulling hooks and picking up a few school mackerel over the next hour, the bite soon died, though with seemingly impeccable timing, as a large storm chased us home.

Two weeks after our first run, another small weather window arose, with the rain forecast to clear, five-knot variable wind and neap tides. We knew an offshore run was on the cards. We departed at the crack of dawn on a Tuesday morning and began making our way northeast to some isolated marks on the wider grounds about 60km from Rosslyn Bay Harbour.

Unfortunately, on our way out we picked up a stray boat that decided to tail us out. Unable to shake the boat, I quickly changed course and headed to some generic marks a little south of our intended destination.

After a good hour of minimal fish and being fished on top of, the boat finally parted ways with us. We quickly packed up and blasted to our isolated marks in the hope of salvaging whatever was left of the early morning bite. We arrived at our first spot and were in luck, with a good show holding on the small rock. Wasting little time, we set up a drift and sent down quality flesh baits.

The bites quickly came and rods loaded up. First fish up was a beautiful school-sized red emperor of about 7kg, which was closely followed by a big goldband snapper of similar size. A couple more drifts and the fish kept coming hard and fast, resulting in a red-hot hour session in which red emperor, large-mouth nannygai and goldband snapper all made their way over the side.

With a healthy feed on board and the bite slowing, we decided to change plans for the rest of the day and scout new ground. But after five hours of little luck, we pointed the boat for home and made our way to Rosslyn Bay in the tail end of our nice weather window. All in all it was a good trip, with smiles all round. The past few weeks of fishing have been so good, I am really excited for the months to come.

The winter bite is showing signs of life and I’m sure good fishing lies ahead for all the fishos in central Queensland.