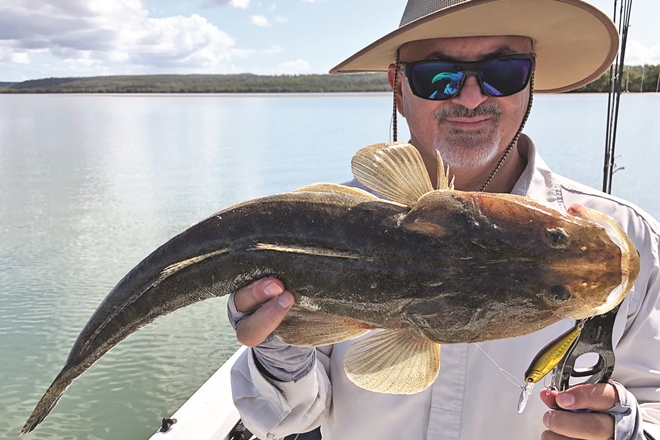 Simon picked up this 60cm flathead trolling one of the new Fish Art Lures.

WE had a reasonable run of weather for the start of the year and then it turned and we’ve copped heaps of rain and subsequent dirty water.

We’ve had fewer days on the water and unfortunately my dud back has decided to play up again. For some reason it seems to do it at this time of year.

One recent trip involved a couple of fellas who completed my off-water course before we headed out to do an on-water tuition session to put it into practice. We had a nice low tide early in the morning, so left the boat ramp around 5.30am and headed to an area not too far from the ramp. We were on the correct size low tide, so were chasing flathead.

And because we had that right tide coinciding with an early morning, we were taking advantage of the peak bite time. We found a suitable drain and checked the colour of the dirty water to determine the colour of lure we were going to use. I tied on a couple of plastics and the guys proceeded to learn the different retrieves I use for flathead.

It wasn’t long before a 50cm flathead was in the net. We tried a few different lures (paddle tails, curly tails and prawns) but the fish were liking a black and gold Zerek Live Flash Minnow Wriggly. In the next half hour the guys hooked another couple of fish but we dropped them close to the boat. It was a very timid bite.

By this stage it was the bottom of the tide, so we decided to move on and target jewfish. The boys and I packed up and shot over to an area where I’ve had success in the past. I changed our flathead outfits for 6-20lb Wilson Blade N Tails rods with heavier 20lb braid. I tied on Zerek Fish Traps and showed the boys the retrieve we would use.

After a few practice runs they had it down pat. I sounded around until I found a new patch of fish on the Lowrance and we started drifting through them. With a few drifts and 20 to 30 minutes passing in the dirty water, one of the guys hooked up.

The water was quite dirty that day, so it was called for a catfish and a few other things until it popped up on the surface with that lovely silver colour. Not a big one but the target species, so we were pretty happy. After quick pictures we put the fish back in the water and released it to fight another day. We fished there for another 40 minutes but had no luck and then the tide started to run too hard, so we left and moved on to rubble ground and used the increased tidal flow to drift around for squire/snapper.

The dark lures had been working all day, so we tied on the black and gold Flash Wriggly. The boys picked up the technique pretty quickly and before we knew it they were onto legal squire. Unfortunately, the bigger ones were taken by the taxman. The boys learnt the technique and caught the target species, which is the whole idea of these training days. It was pretty overcast and a bit drizzly at times but such weather can produce the best fishing.

On another occasion I had a lovely couple Brian and Ingrid out who wanted to learn about flathead fishing. They didn’t do my off-water course but we picked a day that would give us the right tides for chasing flatties. I hadn’t seen many flathead around at the time because the water temperature was 28-29C (surface temperature), which I feel is a bit hot to be fishing the shallows for flathead, but we gave it a red-hot crack and worked hard through the morning session.

They got a fair few bumps and taps casting soft plastics for pretty much nothing and then we moved to another area where we deployed hard-bodies and trolled. I switched to trolling because we were getting taps and bumps, so the fish were not quite on the bite and changing to hard-bodies with six sharp little hooks on them might see a hook-up from another tap or bump.

We put the lures in the water and I kept the boat in the depth and at the speed I wanted. I showed them how the lures needed to swim and react. We got that sorted, and pretty soon Ingrid hooked up. I quickly knocked the boat out of gear and got the other lines in as Ingrid started to fight her fish. The fish headed for the shallows at first and took a reasonable amount of 6lb line.

It had the little ATC reel singing, and as it came to the surface near the boat we realised it was pinned under the chin quite awkwardly, so Ingrid had to basically drag the fish sideways, which made for a tough fight. But in the end a solid 70cm flathead was in the net and a personal best for Ingrid. We took a few quick photos and then the fish was released to fight another day.

I also had one of my regulars Simon out for a fishing charter. We started with a bit of bait fishing and caught a few grass sweetlip and undersize squire. For a bit of fun a rather large white spotted guitarfish played up on the light gear. We also trolled up a few flatties on the new Wilson Fish Art Lures, producing nice fish in the 50-60cm range for a bit of fun.

Let’s hope the weather plays the game over the coming months. At the time of writing we are getting plenty of rain to flush the system and I think it will fish pretty well once it all settles. A fair few prawns have been kicking around in the dirty water in southern Moreton Bay, so if you know how to throw a cast net, it’s time to get out there and score a feed.

As we all know with our jobs and lives, we are time poor, so if you can learn more to optimise your time on the water, then why not? Remember: knowledge is the key. If you’re interested in any off or on-water tuition classes or you just want to do a charter, don’t be afraid to give me a call on 0432 386 307 or send me an email at seanconlonsfishing@hotmail.com