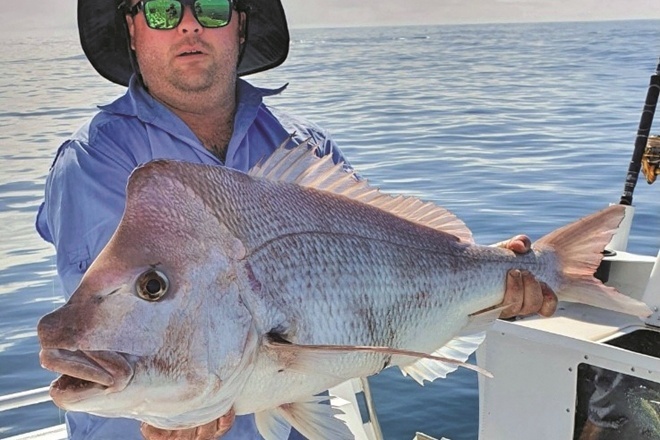 Even though mackerel are here, Adam managed to find a quality snapper off Ballina. Fishing offshore is a great option when the river the river is running brown.

HELLO all and welcome to this month’s edition. I’m not sure who broke a mirror or walked under a ladder, but it would appear someone has. We’ve had more bad luck this year as far as the weather goes. Another sizable amount of rain fell in the Northern Rivers region again and, at the time of writing this article, the river in Ballina was a lovely shade of brown. Ballina brown

My fingers are definitely crossed that this is the last rain we see until well after Easter. I must admit that after the volume we’ve had, I thought it would spell disaster for our mackerel season but as it stands, we‘ve seen reasonable numbers of both spotted and spanish mackerel coming from the close reefs. The main difference is that fish have been caught using a number of different techniques.

Slow-trolling live bait is usually the most common method, but a lack of live bait lately has made this very difficult. So, a few anglers have resorted to trolling dead bait such as slimy mackerel or small bonito, while others have gone the speedy road and have been high-speed trolling with either skirted lures or bibbed hard-bodies. Lennox Point, Black Head and Riordans Reef have all produced fish on different days, so be prepared to do the miles to get the smiles.Ballina brown

Out wider, mahi mahi have been a bit hit and miss over the past month, but bottom species have been fairly active. The current has tapered off to a degree and this has made getting bait or lures to the bottom a much more attractive proposition, but on the flipside it  seems to have slowed the mahi mahi. Mullet and squid have been the best types of bait to use for bottom dwellers, while the better fish have been taken using slow-pitch jigs in brighter colours.Ballina brown

The current slowing down has made it possible for a few boats to head to the shelf, with mixed results. A few very nice bar cod and bass grouper have been landed, along with plenty of green-eyed sharks and a handful of other species, but there have been a few super quiet days too. Back in the river, the discoloured water is beginning to be pushed back on a larger run-in tide.Ballina brown

Bream have been fairly active, with good quality fish showing up on bait as well as lures. Poor visibility at the moment has resulted in hard-body lures having success, as the vibration and noise coming from the internal rattles makes them a little easier for fish to find. Most fish are staying fairly close to the rock walls because this is the safest place for them, with a few toothy critters cruising the murky water.

Flathead have been a little harder to tempt, but mullet, pilchard and prawns have all been good bait options. The hard-body lures and vibes such as Samaki Vibelicious, Nomad Vertrex and Zerek Fish Traps have also been worth trying in the muddy water. The brighter colours have been the best bet, with pink, white and chartreuse being a few of the better options.Ballina brown

With Easter around the corner, it has been good to see quality mud crabs being caught after the last lot of rain. Both creeks have been producing a few, along with the main river from the ferry up to Pimlico Island. If we don’t see too much more rain by the time Easter rolls around, you’ll have to start looking in the main river between Pimlico and Broadwater and up as far as the double bridges in Emigrant Creek.Ballina brown

Don’t forget we have the 2021 Daiwa Bream Series Atomic Ballina qualifier here at the end of May. So, get along and check out the best bream anglers in the country – and pick up a few hints and tips – on May 29-30.

Well, that’s about all from me this month, until next time – tight lines!