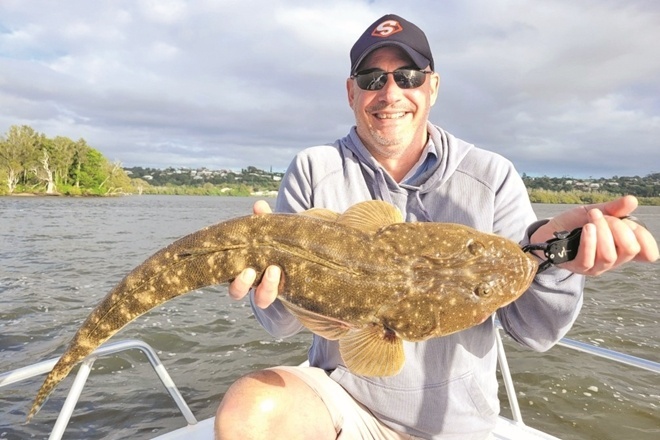 WHAT a wild start to the year we’ve had with the La Niña weather event slamming the east coast and record rainfalls. The peak of the activity was a major rain belt extending for almost 2000km along our coastline, causing major flood occurrences all over, and my condolences go to all the people who have lost their properties and belongings. baitfish bonanza

During winter, a mass migration of species started to follow our coastline, travelling from south to north and spawning along the way. This movement started with huge schools of baitfish such as blue, white and frogmouth pilchard, followed by mullet, bream and tailor.

Included in this food chain are bigger predators, namely jewfish and sharks. The good news for anglers is that historically in the years the east coast has received massive rainfalls through summer, we have had our best winter fishing seasons. The reason for this is flooding in the big rivers and creeks south of us flushes massive schools of bait out of the systems, into the sea and along the coastline. baitfish bonanza

This creates a biomass of life that is schooled up and ready to start the annual migration towards us. Winter should see anglers enjoying one of the best bream seasons for many years, as during this period bream move into the mouths of our big rivers in order to spawn – the peak of this event occurring on a new moon and during the week of a full moon – and will fire up on the first two hours of a run-in tide.

So in summary, if you plan your trips around the river mouths during these periods with well-presented bait and lures, you should have a ball on big bream. It will also pay to take heavier equipment too, remembering that big jewies will also be hanging around taking advantage of the schools of bream and mullet. Anglers fishing along beaches, headlands and breakwalls should also have a cracker season on tailor, as these highly predatory fish also follow pilchard schools into the mouths of our big river systems.baitfish bonanza

The tailor are not hard to locate, just keep a constant lookout for any bird or surface activity and be prepared to troll mid-sized minnow lures around the school or cast metal slugs into the action. If possible, try and choose a slug that matches the size of the baitfish tailor are feeding on for best results. Here is a good little tip that has worked well for me over the years.baitfish bonanza

Jig a small metal vibe along the bottom under the feeding tailor action on the surface, as bream are opportunistic feeders and will move in to feed on the pilchard scraps falling to bottom. Winter is also my favourite time of the year for targeting flathead, particularly in the Tweed River, where I do most of my charters. In certain spots, there are huge amounts of small males congregated around big females through the river, which leaves no doubt in my mind that they are grouped in order to spawn.baitfish bonanza

By now you have probably picked up that there is a lot of feeding and a lot of breeding occurring through winter, so it’s important anglers don’t keep more fish than they need for a nice little feed. By not killing your limit, you will help sustain our future fisheries.

Well everyone that’s it for this month, I am looking forward to the great winter ahead.

Smithy has been working as a full-time professional fishing guide for over 20 years, which makes him southeast Queensland’s and northern NSW’s longest-serving guide. Above all the commitments Smithy has in the charter industry, his overriding passion has always been to pass on his specialist experience to anglers and teach people of all ages and angling abilities the correct techniques required to catch all the Gold Coast’s estuary species on a variety of different lures. Smithy’s unique charter operations guarantees you will catch fish on lures or you don’t pay.
Previous Even more flatties stocked!
Next Fishing after the rain