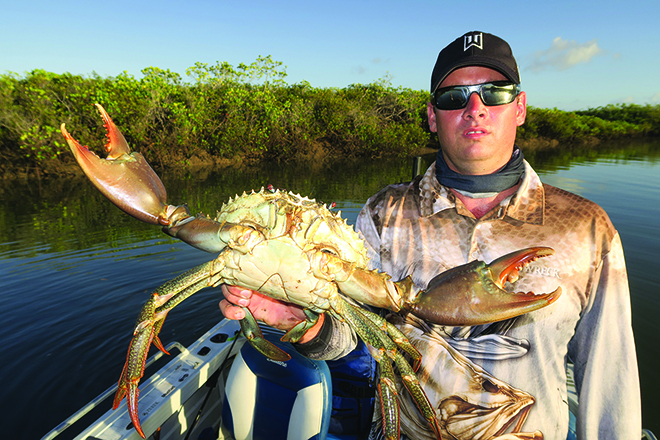 March is the time of year to get out of your comfort zone, get messy, muddy and dirty and join the mud crab madness. Maybe that’s what Christina Aguilera was talking about when she named that big hit many years ago.

Maybe she was really wanting everyone to get dirty and get out to do some mud crabbing. Haha, somehow I doubt it, but it would be a nice thought to have a deckie like Christina on board pulling mud crab filled pots…

Here on the Capricorn Coast, we have received some much-welcomed rain. Not as much as those up north but enough to green the area right up and get some drains running fresh.

This is the time of year when I look at getting out and chasing big Cap Coast mud crabs. You see, I like easy mud crabbing and not having to work too hard to get fantastic rewards.

I also love getting the kids out on an adventure. All three of our kids love pulling mud crab pots. We normally run into a bit of trouble because you can’t evenly divide eight mud crab pots between three kids. Generally I’ve got to pull up a couple to keep it even and avoid sibling rivalry – hence March mud crab madness.

Let’s look at some tactics to get muddies in the boat. We have used these techniques over the years to achieve great success. Just kick back and let’s get down to business.

Before we dive too far into tips and techniques, we will start with the main part of your arsenal that is going to deliver the mud crab goods – a quality crab pot. They come in many shapes and sizes, so how do you know which ones are going to work for you? Basically any crab pot that has an opening and bait in it is going to catch a mud crab at some stage.

The pots I went with are from a company called Rogue and are readily available from all BCF stores. These crab pots are large, round, heavy-duty meshed, four-way entry and one other neat little addition is they have a bait pocket, so you don’t have to worry about zip ties or securing your bait to the pot. BCF regularly has them on sale at two pots for $60, which obviously works out to be $30 each.

I have seen other crab pots that aren’t as heavy duty going for two to three times that price, so in terms of value for money you can’t go wrong. A couple of disadvantages include taking a bit more time to set up because the support pipes that hold the pot up aren’t fixed to the pot, so you have to reach into the pot, pull them out and snap them into place.

Similar crab pots have one end fixed to the pot, so you only have to swing them around and snap them in place. Another minor issue is the rope that holds the mesh onto the two rings isn’t secured very well, but a couple of zip ties fixes that up quick smart. The last one is they are quite heavy when pulling in, so kids might need a hand retrieving them.

When I take the kids, I use a much simpler and cheaper crab pot that still works a treat. These smaller rectangular collapsible crab pots can be bought from Big W for about $13 each. They are so simple to set up and a very capable crab-catching device.

They are light, so the kids can pull them up and they can be set up and ready to drop in only a few seconds. The disadvantages are the crabs tend to tangle in the mesh a bit more and you can’t use them in decent current because they are fairly light. I tend to stick these lighter crab pots up in the gutters away from the main tidal run.

If you went and asked 10 different people what their favourite bait was for catching mud crabs, you would probably get 10 different answers. They’ll likely say fish frames, mullet heads, whole mullet, chook guts, chicken frames, tinned cat food … and the list goes on.

The most cost-effective method if you or any of your mates are keen fishos is to keep the fish frames from your fishing trips. Chop them into sizeable pieces, put them in a sturdy bag and place them in the freezer. If you don’t have access to free fish frames, most seafood places sell them for only a few dollars per kilo.

My second choice for mud crab bait would be either whole mullet or mullet heads. These are available from most fishing tackle shops and the biggest bonus if you somehow managed to forget to organise bait is you can also buy them from most 24-hour servos.

They have saved me on a few occasions when I have left my mud crab pot bait at home. I can remember the first time I went to Port Alma (40km east of Rockhampton) many years ago. The sheer size of the place was overwhelming, but talking to friends who had been out there and to a few of the good tackle shops in Rockhampton had me confident I could find some muddies.

Here’s what I’ve learnt about mud crabbing in March in intervening years. The first step is to get away from the main boat ramps. The closer to the boat ramp, the more pressure the area is going to get.

Once you have located a likely looking area or creek, you need to figure out where the big male mud crabs are hiding. Setting pots in different areas is a great “process of elimination” tactic. So set the first pot near the mouth of a creek, but out in the main channel.March mud crab

With the second one, move it a bit further up and set it in front of a small gutter (though don’t go too far from the mouth). Drive another two pots up to about the middle of the creek and set them in the same positions (near gutters) as the first two. With the remaining pots, make your way right up the back of the creek and place them in likely looking gutters and maybe one out in the main channel.

Obviously, the more mates you take with you, the more pots you’re able to use and therefore the quicker you will locate where the majority of the muddies are hiding. Once you figure out where the bulk of the legal mud crab males are in a particular creek or river, you can move all your pots to that area.

Ever wondered how a mud crab grows? Here’s a bit of information that might clear up a few things. A mud crab’s growth isn’t continuous but results from a series of moults that happen when it reaches the size limits of its current shell. Moulting is triggered by hormones.

A new ‘cuticle’ (hard protective layer) is secreted under the old shell. The mud crab rapidly absorbs water, splitting its shell along suture lines, then backs out of the old shell. It’s amazing to watch.

Substances stored within the crab’s body are rapidly redeposited to harden the new cuticle into a larger shell. The fluid in the body is replaced with meat during a period in which the crabs feed voraciously. The part of the cycle you catch a mud crab in will determine whether it is full or not.

If there is little or no movement then you’re on a winner. The same procedure can be applied underneath the mud crab on about the third leg down. Another good indication your mud crab is chock-a-block is if it is rusty brown in appearance.March mud crab

We like to set our pots on the bottom of the tide, so they can be moved in with the incoming tide. After setting your pots, you can either go and drop a line for a while or sit back with a cold beverage while you wait. In March, we like to check and move our crab pots every two hours.

In the past we wouldn’t check them until the end of the day’s fishing and while we would snag a few, we were oblivious to the potential our chosen creek could deliver.

If nothing is in your crab pot, or only a few undersize mud crabs, it’s time to move it. We work on the theory that if it has nothing, move it a long way but if it gets a couple, don’t move it too far. After the first two hours and the first pot check, start moving them up towards the mangroves with the incoming tide.

The gutters will start filling with the rising tide, so keep sneaking them in as far as you can. After the next two hours it won’t be far off the top of the tide, and we have seen this to be a very productive time.

A red-hot tip for March is to move them right up onto the flats in among the mangroves. Make sure you keep an eye out for fresh diggings.March mud crab

Sometimes our pots are in only a metre of water near the top of the tide. After they have been reset for this stage, we leave them for the remainder of the run-in and about an hour of the run-out.

If you choose to keep working them after the tide has turned to go out, it can be a bit tricky and you will need to be on top of your game, otherwise it can be a long wait for the tide to come back in if you get stuck.

So get out there and into the March mud crab madness. It might take a few trips to get some results but keep working at it and always document your findings. The more trips you do and the more things you try, the quicker the rewards will come.

G’DAY crew, I hope you have all been keeping well over the past few weeks …