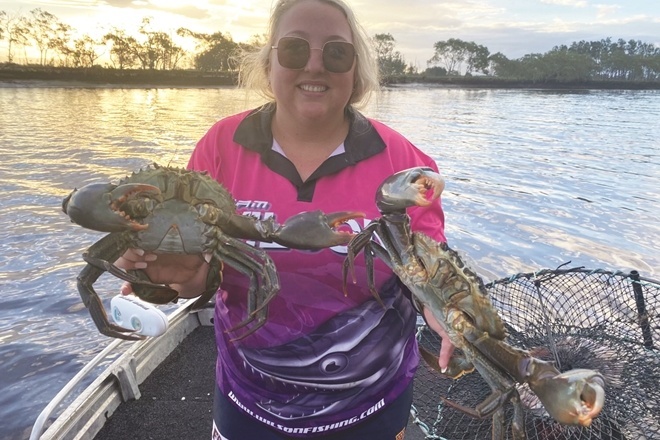 Ash Levy with a couple of muddies taken recently.

Mud crabs in May

MAY is the start of a transition period in the waters around southeast Queensland. The water temperature will drop quickly this month as we head into winter. Summer species such as mangrove jack are greatly affected by water temperature. Mud crabs May

As it gets colder, they start to slow down and it can be a lot harder to get a bite from one of these estuary brawlers. There are still plenty of fish holding in the snags and rock bars, but it can take a lot more casts to get one to bite. The by-catch increases as the water gets cooler, with species such as trevally, grunter, jewfish and tailor all feeding around the same snags as mangrove jack.

There have been excellent numbers of quality grunter showing up in the rivers and creeks around Brisbane over the past few winters. Hopefully we’ll see the same quantities again. Trevally have also increased in numbers. The Pine and Caboolture rivers were loaded with trevally the past couple of winters. Mud crabs May

They’re lots of fun to catch and they eat a wide range of lures. Casting surface lures is an entertaining way to target them. This is best done very early in the morning or late in the afternoon and into the night. Flathead should also start to show up in better numbers this month. The past few winters have been average for flatties compared to a few years ago.

The rivers have had a good flush during March, which sees quite a few rivers running dirty. This will help concentrate bait closer to river mouths and make it easier to find predators. Fingers crossed it sets the river up for a bumper winter. Mud crabs have been extremely active. March and April are generally good times to chase muddies. Mud crabs May

This year we had a lot of rainfall in these months and it really got the crabs on the move. I crabbed a lot leading up to Easter and found it a bit patchy on a smaller tide, but around a full moon when the tide was bigger was excellent. All of the crabs were big and didn’t need measuring, which is unusual around Brisbane.

Plenty of muddies will continue to be on the move this month. The old saying that you only catch crabs in months with ‘r’ in them is a myth. Muddies can be caught all year-round.

It might take a bit more work during cold months, but the quality is generally great. Numbers of females and small crabs decrease during winter, which makes it a lot easier to sort the crabs out. During warm months, it’s not uncommon to get 15 crabs in each pot, with only one or two legal crabs among them. Mud crabs May

This can make sorting them out a bit of a mission at times. I put a whole mullet cut in half and two chicken frames in each pot. This seems to be a perfect combination. Any fish frames I have in the freezer also go in the pots and they all work well. Though oily fish such as mullet, tuna and mackerel seem to work best.

I loaded my pots up with a marlin frame that couldn’t be released in February and I’ve never caught so many crabs in my life. Obviously, marlin backbones are pretty hard to come by but if you have any lying around, let me know! There have been a heap of sharks feeding in the dirty water recently. Mud crabs May

My partner Ash and I had a fish for them in between checking our pots and it didn’t take long to find them. My favourite shark catching technique is to float a live mullet out under a balloon. It’s a visual and effective way to catch them. Most of the sharks were quite small, measuring under 1m. I prefer to use heavy mono leaders for smaller sharks – it seems to get more bites than wire does.

And I use circle hooks, as they stop the fish from swallowing the hook and biting through the leader. There’ll be plenty of sharks to target this month, though they do slow down a bit during cooler months, and they may be a bit doughy. I’ve seen them trying to eat bait next to the boat and occasionally they miss it completely. Mud crabs May

Shark fishing is great fun for the family too. My kids love it and it’s cool to watch a shark come up next to the boat. It also teaches young anglers what actually lives in dirty water in rivers and where not to swim to avoid the ‘bities’! Get out there and enjoy the last month of autumn before the beanies and jumpers come out.

Hope to see you on the water.