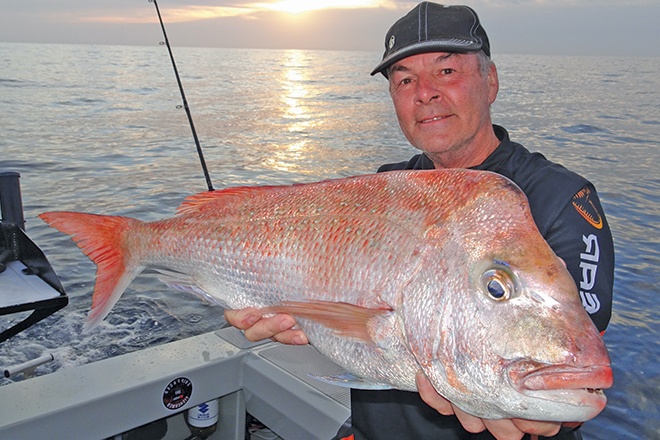 Vern Corfield with a 75cm snapper taken at the 36-fathom line off Southport with a butterflied slimy mackerel.

No surprise that over the past couple of months recreational snapper fishing has been the best we’ve seen in years. Once again social media posts have gone crazy with photographs of terrific captures. Great quality snapper have been caught in close from the 18, 24, 36 and 50-fathom reefs off the Gold Coast. snapper shallow reefs

This cycle appears to come around every seven to eight years, when we have a run of good quality fish coming into the close reefs off the Gold Coast for a season or two. Most of these fish spawn and go on to create hundreds of thousands if not millions of baby snapper each and every year. When and where this happens specifically is not known with 100 percent certainty for snapper, but it is part of nature and happens without a doubt at some stage between winter and spring. snapper shallow reefs

Snapper spawning is a little different to say coral trout – where it happens on a particular moon phase – and that the same thing doesn’t occur at the same time every year with snapper is something we need to acknowledge. Many anglers who have tried to catch trophy fish in the past have succeeded this year with great results and a lot of fish have been measured upwards of the 70, 80 and even 90cm mark. snapper shallow reefs

Fish in the 35-60cm range make up the majority of bag limits that most boats are regularly taking home on their trips to the closer grounds. Many fishers are using and adopting new techniques to keep up with the times. With the aid of extraordinary and particularly clear fish finders and technology in electronics, as well as the use of moon phase and tide apps on mobile phones, many of us are honing our skills and are able to follow the cycles of fish these days.

Quite a few people are also starting to keep records of where and when their captures are taking place and are therefore able to make notes as to when the best time and where the best spots to go fishing are. Understanding that these cycles take years to come around, it is important that you hang on to your notes. Some of my information from handwritten notebooks dates back decades and has now been transferred and is all kept on my phone.

For many years I’ve kept notes and associate them with photos, times and places to follow the patterns and concentrate on my own form of science behind how and where I catch good fish. I also try to keep an eye on other forms of data, including commercial catch rates and other recreational fishers’ catches, to try to determine how the fishery is going.

With the increase in the human population and as a result fishing pressure on the system, we have to do what we can within reason to ensure that we’re all going to be able to catch a fish or two in future.