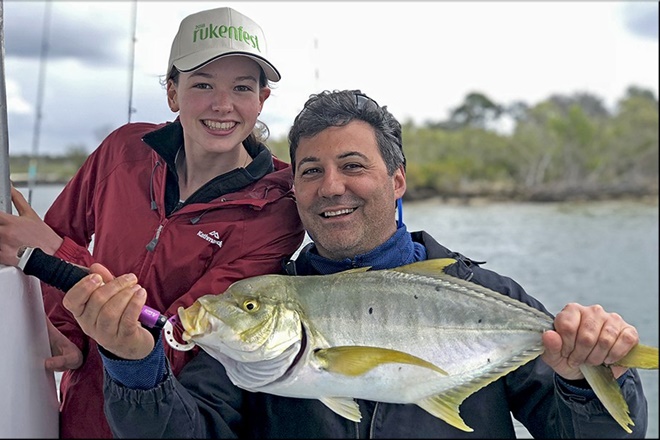 Joe from New York and his Aussie family friend Hillary. Joe hooked this golden and passed on the glory to Hillary to get the fish up to the side of the boat. Measured 62cm. Photo: fishingnoosa.com.au

In the Noosa River we are seeing quality whiting on the chew. The bigger fish have been taken around Lake Donella, Weyba and the stretch from Dog Beach down to the sand bags. Most whiting are taking live worms and peeled prawns on a number 4 Instinct long shank hook. For the lure fisherman try surface lures such as Strada Viral 70mm and the Jackson Ebi Panic. Up near the river mouth, frying pan and the middle groyne has been the spot for flathead with the larger fish taking 3 inch sized plastics including Fuze 80mm Fin Bait and Zman’s MinnowZ. Rigging these with a jig head sized around ¼ ounce and remember to always use a smear of Pro-Cure Scent to increase your strike rate. Trevally are loving those low light periods with Tewantin Marina, first ski run and Munna Point Bridge the pick of spots. Prawn profiles are a real winner with the Chase bait Flick Prawns and Gladiator Prawns producing the better fish. Big surprise is the Mangrove Jack are still on the chew even with the water temperatures cooling down. Lower reaches and between the lakes in the deeper holes is where the better catches have been taken. Try using suspending lures like the Jackson Flow Shad or Soft vibes such as Fish Candy Jack Hammer and Samaki Thumper tails in the 70mm size. For the early morning fisherman try Munna Point and the back of the sound where tailor are smashing larger surface lures like the Bassday Sugapens in 95mm or the 80mm Strada Tournament.

With winds and swell only offering small windows over the last week a lot of anglers headed for the closer in reefs.  Starting with Sunshine Reef, a good smorgasbord of reefies were taken including, squire, cobia, coral trout and snapper. Try rigging up some snelled 5/0 hooks with quality instinct leader ensuring you land that trophy fish. When the closer reefs been the focus of many anglers a berley trail is a must as well as using larger baits, remember big baits means big fish.  Chardon’s Reef has been productive with snapper, pearlies, moses perch and job fish. Squidchard as like to call it, or a pilchard shoved up inside a big squid is responsible for the good sized fish. Reports from North Reef include snapper, Pearl perch, Moses perch and gold spot wrasse with pillies and squid on a paternoster rig receiving most catches.  If you do see a good weather window try the outer reefs like the Hards and Barwon Banks, we are seeing larger snapper, pearl perch, big cobia, kingies and some serious cod. Halls reef and the northern bay is the pelagic central with spanish mackerel and long tails on the bite. Couple of ways to secure these beauties is by floating down pillies and slimey’s or try casting stick baits such as the Saku Stick Dog 180mm for the spanish.

We are starting to see a few good tailor moving up the beaches at the moment, schools aren’t big but there has been some quality fish up to 50cm in length. The Noosa River mouth right up thru Teewah Beach has been really starting to fire due to the water temperature dropping a couple of degrees. Good tailor were landed in the deeper gutters with the run in tide being the most productive. Pillies were the bait of choice as well as mullet and bonito fillet. Large winter bream were also in the mix with fish report up to 35cm with the run in after dark the better time. For the smaller anglers there have been some dart and whiting in the closer gutters with both species taken on beach worms and pippies. Jewies have favoured the night time bite, especially near the top of the tide on the open beach gutters. Best baits have been live beach worms rigged on a Tru Turn 090 worm hook.

In the fresh water at Lake Macdonald and Borumba is showing schooled bass taking deep diving hardbodies with Daiwa Tournament D-Spikes and Jackall Squirrels while on the troll. If trolling is not for you, try casting and slow retrieving the all new Hot Bite Gang Bangers. These lures give off the perfect vibration making them irresistible to bass.