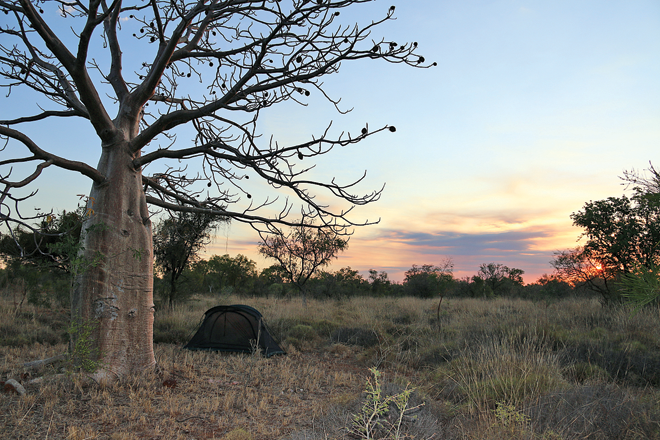 Quick Trip to the Kimberley

BARRA fishing in the semi-desert? Absolutely!

During what has been a ridiculously busy year work wise, my wife Shelley and I managed to spend a fortnight visiting our youngest daughter Hannah and her bloke Sam in Western Australia. And we were able to fit in a spot of fishing too.

A long-anticipated visit to the Kimberley nearly 10 years ago was cancelled due to the loss of a good family friend, and we hadn’t managed to get there since. This was a flying trip in though, straight to Broome, to thoroughly celebrate Sam’s 30th with a lively mob of family and friends.

After doing the Broome thing and being seriously impressed (I was half expecting the tourism side of things to be over the top – but instead found the town and surrounds to be excellent), we climbed into a few four-wheel-drives and headed north through seemingly endless kilometres of semi-arid country to the famous Fitzroy River.

Having previously fished for barramundi in rivers and creeks in higher rainfall areas across Cape York, the Gulf of Carpentaria, the Top End and even in rainforest streams of the Wet Tropics, this wonderfully different landscape of boabs, spinifex and snappy gums was a beautiful change. We chose a spot beside tidal, brackish waters near the Telegraph Crossing to camp, and soon were down beneath the paperbark trees flicking lures and soaking mullet baits as took our fancy.

Plenty of wily pop-eyed mullet were about – those fish that so easily escape a descending cast net – however Sam and his mate Matt had soon captured enough bait to go around.


The weather had already warmed and the days were into the mid to high thirties, and the barra, while not leaping onto the banks, were definitely getting their appetites back to the extent that they were enthusiastically taking dead mullet baits.

Some of Sam’s family from Tassie caught their first-ever barramundi, which of course is one of life’s real thrills. The wildlife too was excellent, with jabirus patrolling the banks, crocs large and small floating about and plenty of lizards scampering around the rocks and spinifex. An absolute highlight for us all was catching a few largetooth sawfish.

These incredible animals, which really do look like they have a saw growing from the front of their head, were once quite common around northern parts of Australia. They are now critically endangered, with thousands having died in gill nets or from having their rostrums (saws) souvenired.

I’d heard that the Fitzroy was now one of the last strongholds in the world for the prehistoric-looking sawfish, so it was wonderful to see some again (we spotted many in Gulf rivers decades ago while catching crocodiles). Needless to say they were carefully released, both for their health and ours, as we needed to avoid the toothy saw that the fish can swing around with amazing speed. The go is to pass a loop of rope, in the manner of a lasso, around the rostrum to help control it while unhooking the animal.

For a change, on this trip I reverted to fishing with a handline. Yes, you may laugh, however fishing either bait or lure from a handline, once mastered, is a wonderful, back to basics experience. With no rod, drag, or reel handles to wind, there is nothing to buffer any bites or fish action. It truly is hands-on action!

You learn quickly about how different fish bite and how they fight, which is fantastic. Another benefit is being able to fish from fairly tight spots between trees on riverbanks, where a rod is often a hindrance. Sometimes a lack of sophistication can be a boon.

After a few wonderful days beside the Fitzroy, camped under boab trees, we headed south into Pilbara country and there diverted out to Pardoo Station. Pardoo is a working cattle station that has also set up a large grassy campground suitable even for caravans. Bush tracks give access to the coast and creeks where threadfin and bluenose salmon and barramundi are about in good numbers.

Those with bigger boats can also head offshore for excellent reef fishing. We only had one night here but it was excellent. Some people come and stay for months and I can see why. The final jewel that Sam, Hannah and all had in store was a visit to the incredible Karijini National Park. Deep gorges, cut through millions of years of weathering and erosion into the landscape, feature permanent running water and frequent waterfalls.

The landscape is truly stunning, and the rocks here are so old that they predate wildlife and plant forms able to be preserved as fossils. We camped in the great national park campground and enjoyed the extensive interpretive centre but mostly revelled in the various hikes through the gorges. A wonderful experience and many thanks to Hannah, Sam and all for a brilliant fortnight.

We will be back, and not soon enough!