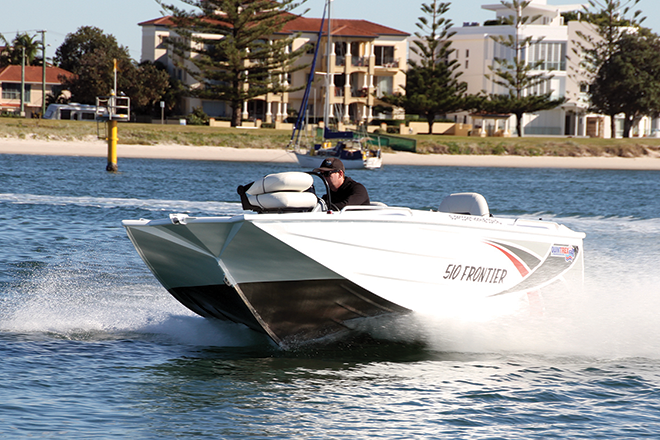 While looking somewhat ‘punt-like’ from certain angles, check out how efficiently the Apex Hull deals with spray on the move.

QUINTREX is renowned for implementing exceptional design and innovation to stay at the forefront of the affordable alloy boat market.

This has never been more evident than with the brand’s recently released Apex Hull design, which I sampled in the form of the 510 Frontier supplied by Gold Coast-based dealership Surf Coast Marine.

Design
You’re certainly not going to miss an Apex Hull Quintrex, with the unique ‘pickle fork’ bow design immediately grabbing your attention. At first glance, the Frontier struck me as a variation on a punt build due to its almost square white-painted bow when viewed front on.

However, closer inspection revealed the 510 Frontier to have quite a sharp deadrise at the waterline. The Frontier featured a few other things I had never seen on a boat – the first being raised and rolled side decks with a one-piece weld running the full length of the side sheet.

Not only do the decks add to the Frontier’s unique design, according to Surf Coast Marine dealer principal Paul Banning they also improve its strength and interior volume. Another unique feature are the generous cup holders in the side decks, which are perfectly positioned for the driver and rear passenger.

Yet another standout design element was the slick new side console, which gave off a definite ‘bass boat’ vibe with its low-profile curved windscreen, though the sturdy grab rail looping over the console would prove handy when standing up while driving through rough water.

Seated at the helm, the controls fell naturally to hand and the instrumentation was clear and easy to read, with plenty of room to flush mount a 12” sounder in the console and storage below for odds and ends.

The test boat incorporated a full transom design with rear pod and boarding ladder, though a transom door is an option to allow easier access from the stern. Both the front and rear access points are covered in SeaTread as standard, which is a great material that provides exceptional grip for wet feet and looks fantastic to boot, especially when engraved with the Quintrex logo.

As with most Quintrex models, the Frontier comes with a healthy amount of gear as standard, but the options list is extensive and you can effectively walk into a dealership such as Surf Coast Marine and design your ideal boat with a few flicks of the pen.

Jumping onto quintrex.com.au reveals a plethora of options to turn the Frontier into whatever you want it to be. The Frontier range is designed with fishing front of mind, as reflected by the list of standard inclusions above.

Surf Coast Marine’s test boat was optioned up with just a couple of extras, my favourite being a deluxe rod locker. At 2.1m long, this locker with inbuilt Rod Saver rod holders would prove invaluable to serious anglers by freeing up deck space when fishing and keeping sometimes fragile rods safe and sound while under way and travelling to and from the ramp.

The boat also featured hydraulic steering (beneficial but not essential on a 5.1m open boat) and a bow-mount plate for attaching an electric motor.

If it was my boat and I was starting with a blank canvas, I’d add the above options as well as a cutting board and deck wash and I’d be a happy fisho.

There’s no need to beat around the bush – the 510 Frontier with a 115hp Evinrude E-TEC on the back is a dead-set weapon. Holeshot was instantaneous and we were on the plane at 15 knots, with the E-TEC ticking over at just 3000rpm.

Trimming the motor out, we pinned the throttle and at full chat easily hit the 40-knot speed limit in Queensland waters. The setup’s happy place was from 3500-4000rpm where the motor returned an exemplary economy figure of 18.3 litres per hour while trotting along at about 22 knots.

It’s fair to say the 510 Frontier has the legs to go the distance in almost any inshore situation, and if you plan on going further afield, the standard 85-litre fuel tank can be supplemented with an optional 72-litre secondary fuel tank.

I was encouraged to tuck the Frontier into a few tight turns, and so I did, coming away suitably impressed. Even with the motor trimmed out for top-speed running, the Apex Hull gripped the water with claw-like fervour, and the outboard didn’t complain or cavitate once.

And while conditions on the Gold Coast Broadwater were idyllic, we ran over our own wake several times as well as the wakes of other boats and came away completely dry, with the aggressively flared hull pumping water down and away from occupants.

You always expect to get a bit wet in open boats and it’s really just par for the course, so I’d love to see how the Frontier would handle ugly conditions as I reckon it could be the exception rather than the rule.

I think it’s fair to say the Quintrex 510 Frontier could be a lot of things for a lot of people.
Whether it’s fishing the creeks and bays with the family, towing the kids in a tube or heading offshore to tackle big fish, you can bet the 510 Frontier will handle it with aplomb.

If you’d like a taste of what a Frontier can do for you, book a water test with Surf Coast Marine today. The team at Surf Coast is committed to servicing everyone from the Gold Coast up to south Brisbane, offering great prices on Quintrex packages and friendly advice to boot.

A huge variety of Quintrex models can be found in the Surf Coast Marine yard, and because the dealership is located so close to the water, going for a test run in a new boat is something the team is only too happy to accommodate.

Check out the below video by Surf Coast Marine to get an even better idea of the Frontier’s on-water capabilities.

Daniel is BNB's subeditor and occasional fish-wrangler. If you've got a great story or at least an idea for one, flick Dan an email at editorial@bnbfishing.com.au
Previous Great Northern beer adding Aussie flavour to the Gold Coast Flathead Classic
Next X-Factor Teams event at Cania Dam