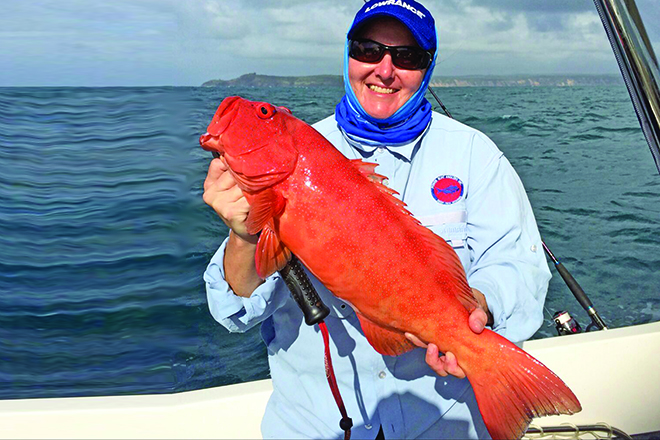 THE Squid Rowe Trophy is one of our friendly competitions based around Rainbow Beach fishing over the Anzac Day and May Day long weekends.

The competition has seen its share of ordinary weather over the years but we usually get at least one decent day to go fishing. The Anzac Day trip was a blow-out, with everyone deciding to pull the pin before a boat was even hitched. Hopes were high for a reprieve on the May Day weekend. Initially things looked good, with perfect weather in the week leading up, but as seems to be the way, it all went pear-shaped as the wind started to pick up a few days out from departure. A glimmer of hope remained though, and that’s about all some Power Boat Anglers need to see a green light.

Rob Schomberg drove up on the Tuesday with Helaine, with Dale tagging along dragging the club trailer.

On Wednesday it was still blowing, so they decided to try something different – chase squid at the mouth of Carlo Creek. Not saying it was breezy or anything, but the parachute had to be deployed just to slow the drift enough for the poor squid to get a look at the jigs. Just when the anglers thought it couldn’t get any worse, the fan was cranked up another 5-10 knots, which was a clear sign from above that it was time to head back to base and lick their wounds.

Thursday saw the arrival of Darren Downie who had been ably assisted up the highway by a stiff tailwind. While still breezy, things were at least fishable, so the two boats set out with a plan to fish the T Bar ledge and other little reefs in the Great Sandy Strait. Yet another day with the parachute out, the wind blowing 20 knots in the face and nothing much to show for it except a stellar mother-in-law hooked by Dale. While a great lump of a fish, they’re not really worth keeping, so it was sent back to resume what it was doing before it got yanked out of the water.

Friday arrived and the crew could stand it no longer: they decided to head out over the bar and fish some of the nearby gutters and the Double Island Point pinnacles. With the wind still blowing and getting no change out of 20 knots, a 2m swell running and 2m seas, you could say conditions weren’t exactly ideal. A few fish were put in the box but not enough to warrant the pounding they took.

Saturday came around and Paul Dawson arrived on the scene, bringing with him a mild improvement in the conditions. The plan of attack was ditto from the day before, with the hope that the smaller sea would allow the baits to stay in the strike zone long enough to actually be seen by a fish. The pinnacles fished slowly all day, with the highlight being a couple of decent trout for Helaine and Paul. Other odds and sods were brought over the side but were just Esky fillers.

On the way back through the gutter, a little pressure wave caused a bit of excitement when it popped up and lifted the rear quarter of Amity, causing it to slide sideways down the wave. Things got a bit hectic for a second, with people tipping all over the place, but Helaine was quickly back to the helm and had everything under control in an instant. It just goes to show you always need to keep your wits about you and be prepared for the things you can’t see. Once safely back in the channel they recounted their experience and were happy to be back on some flat water and looking forward to a calming ale back at the camp.

Sunday arrived and it was a late start due to a few rain cells that took a while to move away. Once all clear it was back out over the bar that had given them all a learning experience the day before, before heading out to the northeast. The further out they went, the better the conditions became, with all boats seeking out their favourite marks and trying for the elusive big reds. Amity searched high and low through old spots and new, and while catching a good number of reds they kept coming up short on one end.

With time getting away from Helaine and her crew, they decided it was time to go looking for a feed and set out chasing the usual fare of snapper, pearlies and tuskies; basically anything to add a bit of colour to the Esky. Amity did it tough while Salty seemed content with his secret snapper spot, and Sil on Lucia was awfully quiet, meaning he had probably found the mother lode and was braining them. It appeared that was indeed the case, as Sil and his crew had caught the catch of the day. Unfortunately they didn’t weigh in because they assumed everyone had done better, so just cleaned and filleted what were actually the winning fish. In the wash-up, Darren Downie was the very deserving winner of this year’s Squid Rowe Trophy.

Next meeting
The next club meetings will be held on Monday, June 6 and Monday, July 4. Meetings are held on the first Monday of the month at the Bulimba Bowls Club located in Quinn St, Balmoral. Please feel free to come along and see what the club is about. Until next month, safe boating.