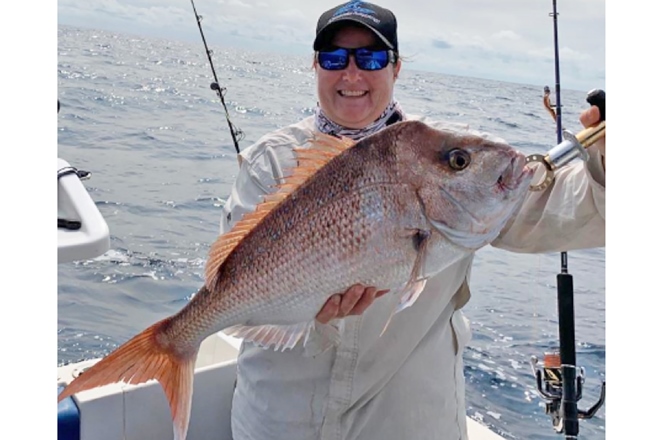 HELAINE booked a house at Rainbow Beach for a little rest and relaxation with the family, inviting Rob Schomberg and his wife along.

On the first day Rob and H decided beach fishing practice might be the go in preparation for the Power Boat Anglers’ upcoming beach fishing weekend. When it comes to fishing the deep, they are both extremely competitive and the Rainbow Beach surf was going to be no different. H hooked up to a nice dart to start with and quickly lost her spot to Rob when she turned around to remove the fish. By the time she got back, Rob was onto another dart of similar size.

Then it was her turn again and so on until they left the Rainbow Beach gutter with a good feed, having only kept the decent ones. Turns out they weren’t the only ones chasing dart because one came in a bit short on one end, most likely due to the attention of a shark or spanish mackerel working the gutters. A couple of beach fishos at Double Island Point caught two 20kg spaniards the previous day, which gave them food for thought.

Rob also caught a strange-looking bream thing that was big enough to get fillets from and was quite tasty cooked in the smoker with the addition of his secret marinade. Next day they went back to the beach, this time to DI, but couldn’t cast a line unless they wanted to hook a swimmer. It was too packed to fish, so they sat back and enjoyed the scenery, beers and a feed of the prawns Rob had caught before the trip to Rainbow Beach.

The following day was a repeat of the previous, with everyone sitting around watching the water and having a couple of coldies to wash down the cold-smoked fish and crackers. Rob and H landed an invite to head out for an offshore fish with Ian on his Cruise Craft 685.

Both were up early, trying not to wake anyone in the house as they snuck out under the cover of darkness. Ian was ready to go by the time they arrived, so it was straight off to the ramp. Making quick work of a flat Fishermans Gutter, once through it was off to the new wave-rider buoy searching for dolphinfish.

The spot was dead and after a quick scout around, they moved out to the 40km line to look for shows. They found what they were after using the sounder and floated down some baits. H started jigging alternating plastics between the 57 rods she just happened to have with her, trying to entice something big.

Eventually persistence paid off and she hooked a snapper, which fought all the way to the boat. It had been a long time between drinks since she’d landed a quality snapper on artificial baits and was glad to be back in the saddle.

Ian followed suit shortly after with another nice snapper, but Rob was left seething as his run of dropped fish continued and he was unable to convert. They kept chipping away and managed a decent mixed bag by day’s end, with the snapper being the pick.

Rob and Helaine hit the ramp at 3.30am hoping for a quick trip across Moreton Bay.

The bay had other ideas and being the mess it was, hindered their speed as they travelled across the water. Days like these remind you just how far across it actually is and how long it can take when conditions aren’t quite right. Arriving at North Point, they were met by big swells requiring a fair bit of work on the throttle to get through and out to Cape Moreton.

So close but yet so far, they punched the last 500m to be greeted by the sun rising above a line of clouds on the horizon. Being a public holiday, they found it a little weird that theirs was the only boat in the area and they hadn’t seen any others or heard them on the radio.

Regardless, plastics were drawn as the first line of attack and duly cast with high hopes of nailing decent fish. Unfortunately, no one told the snapper and after an hour of casting they had only hooked one legal and three or four undersize fish for their efforts. Rob eventually changed it up and tied on a 60g micro jig to see if he could get any attention from something different.

It did the trick and as it hit the bottom it was smashed, putting him in all sorts of trouble. Using a PE1-1.5 jig stick and a new Shimano Tranx 400 baitcaster with 30lb braid, he soon found the rod totally out-gunned as it bent to the butt. Unable to put hurt on the fish, things were destined to end badly and they quickly did.

Not to be outdone, another $25 jig was tied on and dropped on the next drift. It too made the bottom and on first lift got smashed. It was Groundhog Day all over again. They guessed the first fish was a cobia and the second an amberjack. It couldn’t possibly happen again!?

Rob had brought a stack of micro jigs to use, so use them he did, attaching another ready for the next drift. This one lasted the drop and two lifts before it got slammed, and despite changing up to 40lb the result was the same. On the other side of the boat, H had been watching this unfold. She was using heavier gear and hadn’t had a touch.

It was time to go deep, so they headed towards Deep Tempest, stopping short on a little pinnacle in 75m for the first drop. The current was bad, with two 10 ball sinkers and 250m of braid not getting to the bottom. They found the only way to get down was to deploy the sea anchor and keep the motor in reverse.

Even doing this, the plotter had them going 4km/h the other way and they only pulled in undersize pearl perch. At Shallow Tempest they found a show of fish that broke them off on plastics.

Rob was not keen on donating any more $25 jigs and the fish weren’t playing the game anyway, but after his earlier encounters he was now convinced there was something to this micro jig craze after all.

In the end, they lost more than they landed but got a decent feed just the same. Expect to see Rob with a new beefier micro jig rod soon.   rainbow beach

For more adventures from the PFA crew, click here!