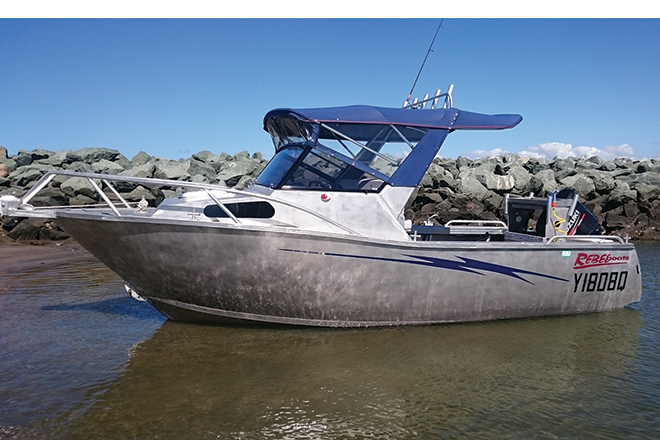 TIRED of centre consoles, tiller steers and open boats in general? Wouldn’t it be nice to have some shelter from the elements?

A cuddy cabin would be perfect but a larger boat won’t fit under the house, so what to do? Well Rebel Boats has solved these problems with a fantastic new design.
Rob Messer recently approached Warren Cameron from Rebel Boats to discuss the above dilemma.

Rebel Boats is a custom boat manufacturer, so plans and designs were soon finalised and the boat you see in the photos was the result.  Rob’s Rebel 5.5m Bay Runner Series has broken new ground with a fold-down rocket launcher, removable windscreen and custom-built trailer.

Rob had a maximum height allowance of 2200mm, and the final overall height has come in at 2160mm to the top of the dash-mounted GPS/sounder units.
Perfect!

Rob does a lot of whiting fishing at the Moreton Island Sandhills, which is a 60km round trip across the sometimes sketchy Moreton Bay. He now makes the trip in comfort.

This is one seriously nice plate boat, with features including a 5mm bottom, transom and frames, 6mm stringers, multiple air chambers and foam filling under a self-draining deck.

The unique transom layout incorporates the rear steps into the side sheets, giving the boat a longer and streamlined appearance as well as opening up the rear decks. 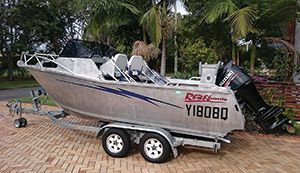 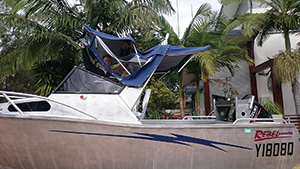 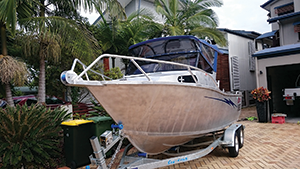 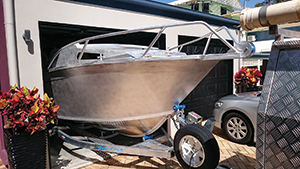 Bunk area is a generous 1500mm centreline with the ability to stretch out to 2m along the bunks.

Bolted on the back is a 140hp Suzuki four-stroke. Supplied by a 150-litre underfloor fuel tank, this boat is more than capable of overnight trips offshore.

If you’re interested in the Rebel range of custom-built boats, please give Warren a call on 07 3283 3373, email rebel boatsaustralia@bigpond.com or visit the Rebel Boats Facebook page for up-to-date build photos.