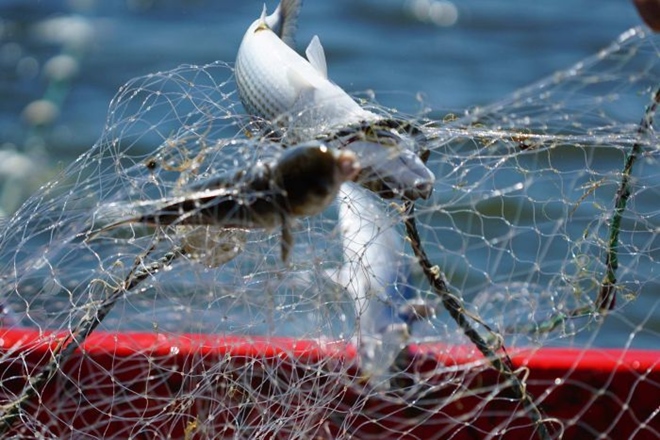 The Australian Fishing Trade Association represents the tackle and bait industry, supporting about five million anglers. AFTA chief executive Allan Hansard said the industry would use its political power to push for a greater share of fishing resources in all states. “There is a place for net fishing but it’s not where there is a high population of people who share the waters with them,” Mr Hansard said. AFTA has already backed successful political campaigns in Victoria and Queensland — where net fishing bans became state election issues.


Mr Hansard, who also runs the Government-funded Australian Recreational Fishing Foundation, said net fishing in NSW would be targeted next year after reforms in the commercial sector were completed. This would centre on the Hawkesbury River, the Central Coast and in the Shoalhaven River. “It’s not that recreational fishers are against commercial fishers, no,” Mr Hansard said. “We need to share the resource — the word needs to be ‘share’ and that doesn’t mean that commercial fishers net the whole area and leave no fish for the recreational fishers.”

State governments are already bowing to the pressure. Net fishing is being phased out of Melbourne’s Port Phillip Bay to honour a promise made by both sides of politics before the 2014 state election. Fisheries Minister Jaala Pulford denied commercial fisheries were being sacrificed for votes. The net ban was part of a policy to encourage one million Victorians to fish, she said. “Our recreational fishing policy is about increasing the number of people participating in recreational fishing,” Ms Pulford said. “I often think of it as getting kids off couches and away from screens; it’s a great activity and it’s one that’s enjoyed by many people. We want to make that opportunity available to more people and we want to make it a better experience for people who are already participating.”

The Victorian Greens said the net ban policy was all about politics. Spokesman Greg Barber said the science on the bay’s fish stocks was ignored by both major parties in a “stampede” for votes. “This was about raw politics — the numbers of recreational anglers versus the numbers of commercial fishers,” Mr Barber said. “You can expect to see this phenomenon work its way up the east coast because the politics will just be too compelling and will win out over the science every time.”

In the lead-up to the election, tackle and bait retailers helped target marginal seats in Geelong in a campaign guided by the not-for-profit Future Fish Foundation. David Kramer is the chairman of the foundation and a partner in Victoria’s biggest fishing retail outlet. “The recreational anglers said, ‘enough’s enough’,” he said. “We lobbied as the Future Fish Foundation, lobbied both sides of politics — we went to them with the same ideas, both parties, and said, ‘these are some of the ideas we want to improve recreational fishing’. Commercial netting banned in Port Phillip Bay was only one of many initiatives that we suggested, but the public won.”

Seafood Industry Victoria said consumers were being denied sustainable local seafood to appease people who fished for a hobby. Executive director Johnathon Davey said Australians were already importing 80 percent of their seafood. “We can’t live without imports — there’s no doubt about that; we can’t produce enough to satisfy our local demand — but what we have in terms of local seafood is being taken away from consumers and it’s not good fisheries management having political decisions implemented,” Mr Davey said.

In Queensland, recreational fishers also campaigned for net bans before last year’s state election. About 50 commercial net fishing businesses have since been removed from the central and north coasts and the state Government is now honouring a further election promise to investigate net bans in Moreton Bay. The Government said it had not made any decisions but the numbers appear to make the politics hard to ignore. Moreton Bay is home to about 60 commercial fishers and 400,000 anglers — and it is one of the most politically volatile regions in Queensland. Eight of the nine electorates covering the area changed hands in the last two state elections.

The Queensland Seafood Industry Association said it believed a net ban was inevitable. Acting president Keith Harris was one of the net fishers affected by this year’s closures in the Fitzroy River at Rockhampton, and he said he believed the same fate awaited Moreton Bay’s industry. “We’re basically like the sacrificial lamb nailed to the cross at the expense of the public’s right to access the fish,” Mr Harris said.

Sunfish, which represents Queensland’s amateur fishing sector, said it only wanted gill nets, commonly called mesh nets, removed from Moreton Bay. Executive officer Judy Lynne said the organisation was prepared to allow tunnel nets and trawlers to continue operating in the bay. She said mesh nets were a problem because they caused localised depletion, damaged the seabed and threatened species of conservation interest including turtles and dugongs.

The increasing political power of recreational fishing comes at a time when questions are being asked about the sector’s own environmental impacts. The Australian Productivity Commission has just completed a major study of fishing and aquaculture and found that there was “weak knowledge” about the size of the recreational catch. It said sound evidence-based research was needed and recommended uniform licensing of anglers in every state.

Currently, South Australia, Queensland and the Northern Territory do not require amateur fishers to be licensed. The commission has also recommended the Commonwealth Government conduct national surveys of anglers every five years. At the moment state governments mostly rely on voluntary surveys at boat ramps. Melbourne University marine ecologist John Ford said this fell short of what was needed for an accurate account of the recreational take. “You need to get a good sample size; you need to get enough people doing that [to get] a good representative sample of who is out there,” Dr Ford said. “We know of recreational fishers — the avid fishers, the ones who are really, really keen, who get out there a lot — they’re good at what they do, they spend a lot of money on their gear. They’re the ones that catch the vast majority of the fish, so we want to really know what those guys are doing and whether those guys are increasing in number.”