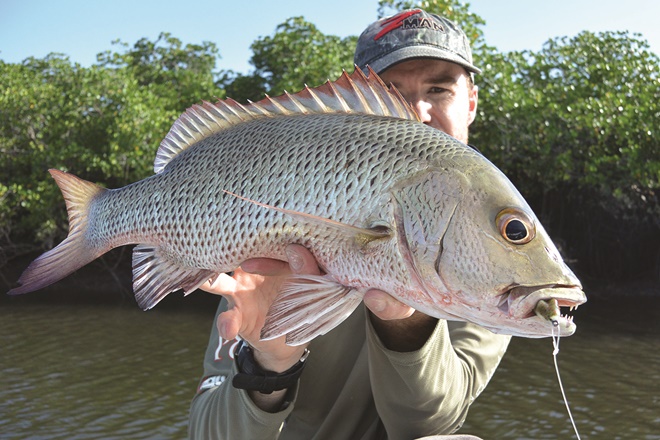 YOU find that perfect snag deep at the back of some overhanging mangrove roots.

You position the boat and prepare to make a cast. As the rod tip goes back, a shower of baitfish erupts and a red flash slices through them with an unmistakable snap. Your grip on the rod instinctively tightens and the heart beats a little faster. You bring the rod tip forward and the plastic shoots away – skip, skip, skip deep under the overhang. Engaging the reel, the adrenalin pumps as you watch your offering paddle across the surface.

A boil is all you see before a ferocious attack. Your rod is nearly ripped from your hands due to a heavy drag setting. You haven’t got a wind on the reel but keep control of the fish with quick reflexes and rod work. The fish lunges towards its home and you feel the line brush structure.

A quick pump and wind wins you 30cm and the fish comes into the open. The battle is won. The entire fight probably only took about one minute but the shaking hands tell the story.

Most of you will already know the fish I am talking about. The undisputed king of the snags – an aggressive powerhouse, sucker puncher and brawler. The mighty mangrove jack.

Jacks can be found all across the tropics and the odd capture is even recorded as far south as Coffs Harbour in NSW. Though not always the case, it can be said that north has the numbers and south has the size. So where it’s possible to have double-figure sessions in the tropics, it is rare to get fish over 50cm. But in southeast Queensland a 50cm fish is common and classed as a puppy, as jacks well into the 60-70cm bracket are captured regularly, though a two or three-fish session is an epic day.

I must add that jacks will move out onto offshore reefs when they mature, and fish pushing 80-90cm can be encountered. These are beasts and a sight to behold.

I am lucky enough to call Lucinda in north Queensland home, with the magnificent Hinchinbrook Island and its endless mangrove-lined creeks as my backyard. On a good day it’s common to get double figures with a couple of people fishing. Plenty of anglers chase them with live or dead baits and do very well, but for some (myself included) the only way is on lures and soft plastics. Now this is a big call but if I could only chase one fish the rest of my life using one technique, it would be jacks on frog-imitation lures.

So if casting heavy structure deep inside tropical creeks for angry fish sounds good and your casting arm twitches a little, read on. Plenty of soft plastic frogs are on the market and I have used a few different makes and models over the years but for me the standout is the 2.75” Z-Man Finesse FrogZ. These plastics are buoyant and their reputation of being 10X tough is handy when you deal with toothy fish and harsh structure. I rig them with 1/12oz TT SWS ChinlockZ jig heads, which lock the plastic in place.

The light weight offers many advantages. First, it means better casting distance and aids in skipping the frog when you need to get under overhangs. The weight will act as a keel and keep the frog paddling straight, especially if the water is a little choppy from wind or current. And last but not least, you can slowly sink the frog into structure if fish are sitting deep.

This rig is also weedless/snagproof (you can still get snagged but a lot less commonly than with traditional hooks), which is really handy because you will be attempting casts into gnarly country. Getting snagged is part of the game. As with most lures and plastics, a loop knot is necessary to allow maximum action and because these lures have a small profile, it is best to keep leader size down to around 30-40lb.

Jacks are one of the more aggressive fish you will come across but at times they will still shut down and not be interested in eating, no matter what you throw at them, just like other fish. Timing is critical and can be the difference between a few fish and lots of fish hitting the deck. In my area, the first few hours of the run-in tide are best and I would guess this would be the same for most places. Moving water is crucial and jacks rely on their prey getting pushed along with the tide. They will sit facing into the current but in their chosen structure.

So when fishing, it always helps to be pushing against the tide in the boat and casting forward of the snags. Make sure casts land a few metres in front and up-current of the snag and prepare to get smashed as the frog nears the structure.

The above situation is why it can be very tricky extracting fish and why so many are lost back into their homes. To assist you getting the fish away from their homes, strike hard in the opposite direction to the structure, which can mean you win a little ground straight up and just need to survive the power run. Jacks normally eat their prey on the way back to their home, which means they have momentum on their side.

Now this next part is a little difficult to do, but try very hard to not strike right as your frog gets hit. If jacks miss the hook, normally they will have another go but if you strike it means the frog will fly over your head and away from an angry and hungry fish. The ferocity of the hit and a firm drag setting will mean the hook sets no worries because TT ChinlockZ are super sharp.

Choose a rod with a fast taper to put pressure on them quicker and your reel should have the drag close to locked up. Jacks can strike with such power that if you completely lock your drag they may just pop your leader or snap the braided line, so do it up tight but be prepared to use your thumb if using a baitcaster.

To make things a little more interesting, using the small Z-Man Finesse FrogZ will normally mean you need to use just light to medium spin gear to cast them. You must be on the ball or you will get stitched up a lot. Learn to use your fingers on the spool of spinning reels to add more drag quickly!

I use 15-20lb braid and 40lb leader and find this more than enough to win most battles if I anticipate bites and turn the fight in my favour. This is also where I should warn you that an angry rampaging jack over 40cm can destroy you in an instant, no matter the gear you are using, thanks to the heavy and unforgiving structure they reside in. But that is the most addictive part of the game.

For anyone new to chasing jacks or struggling to catch them, concentrate on your casting, as close enough is not good enough. You need to consistently land that frog right in tight to your chosen spot. If this means setting up a bucket as a practice target in the backyard, it is well worth the time. Being able to throw a variety of casts will pay off because normally an obstruction will impede the traditional casting technique.

Practice low-trajectory casts because they will come in handy. I take no responsibility for the addiction you are about to fall into. Like me, soon you will probably have tackle trays of hard-bodied lures stacked in the corner collecting dust as you won’t want to use anything but frogs.