Repeat offender has vehicle, jetski and trailer seized at Ulladulla.

Repeat offender has vehicle, jetski and trailer seized at Ulladulla.

Fisheries Officers from the Batemans Bay District and the Statewide Investigations and Operations Group Regional Mobile Squad – South have apprehended a repeat fisheries offender with an indictable quantity of Abalone and a commercial quantity of Eastern Rock Lobster on the State’s south coast.

The officers were conducting routine compliance patrols around the Ulladulla area when they came across a well known fisheries offender diving from a jetski. After observing the man diving, Fisheries Officers then apprehended the man and allegedly found him in possession of 61 Abalone (30 times the legal limit) and 6 Eastern Rock Lobsters (3 times the legal limit) and later allegedly found a further 33 Abalone hidden in the Jetski.

Fisheries officers seized the Abalone and Rock Lobsters along with the alleged offenders vehicle, jetski, trailer and dive gear. The matter will now be progressed to prosecution.
Anyone observing suspected illegal activity should call the DPI Fishers Watch service on 1800 043 536 or report it online at: https://fal.cn/3fMUz. 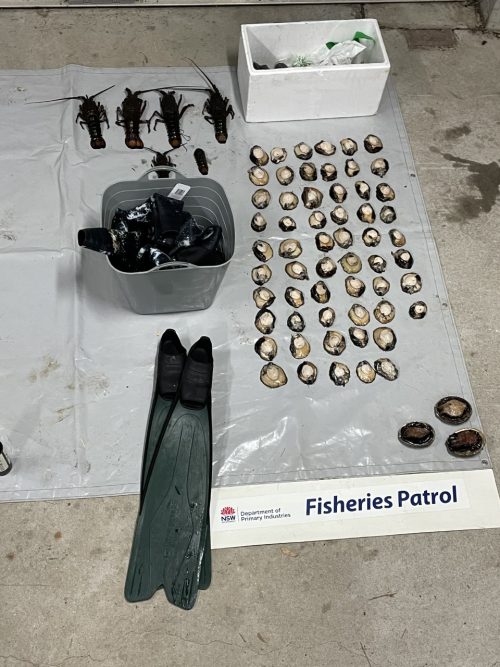