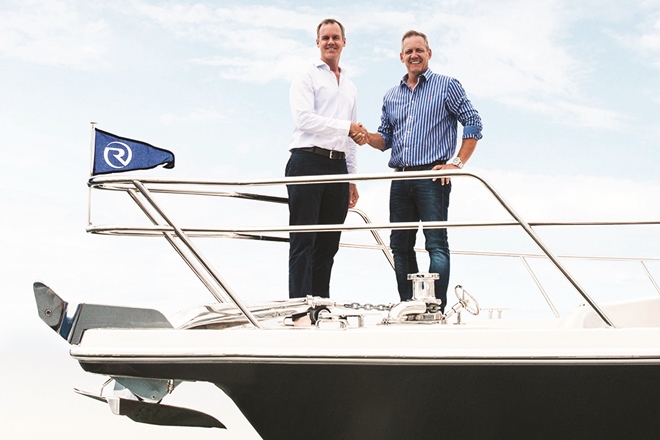 As one of the first exhibitors to sign up for the 2018 show, the iconic Gold Coast-based manufacturer will return in full force, bringing with it an inspiring multi-million-dollar showcase including one world premiere model. Officially launching the 2018 edition recently, Sanctuary Cove Show general manager Johan Hasser said the team was thrilled to have Riviera return for what was already gearing up to be a bumper anniversary show from May 24 to 27, 2018.

“We are excited to announce Australia’s renowned boating brand Riviera is back on board for the 30th anniversary of SCIBS,” Mr Hasser said. “Riviera is a major force in the global marine industry and we are pleased to have them join a host of leading motor yacht brands at next year’s show.”

Having launched more than 5200 motor yachts over its reputable 37-year history, Riviera’s display will represent the brand’s five distinctive and highly awarded model collections – the SUV, Flybridge, Sports Motor Yacht, Sport Yacht and Belize motor yacht range. Riviera owner and chairman Rodney Longhurst said the company was excited to be returning next year to celebrate the show’s 30th anniversary alongside the rest of the marine community.

“We are proud to be returning to the Sanctuary Cove International Boat Show in 2018,” Mr Longhurst said. “SCIBS is the premium boat show in Queensland and the entire Riviera family is looking forward to being back and playing a part in this world-class event.”

Having designed and launched 12 extremely successful new models since Riviera’s last Sanctuary Cove Show appearance, Mr Longhurst said visitors would have the opportunity to step aboard and experience the very latest luxury Riviera yachts from their individual design collections.

“Over the past five years, we have created 12 new models and launched two entirely new motor yacht designs with our class-defining, long-range 68 and 72 Sports Motor Yacht Collection and our sporty and adventurous SUV Collection featuring the 445, 525 and 575 models,” he said. “We are excited to share our significant achievements over the past five years with Sanctuary Cove Show visitors, who will have the opportunity to step aboard selected new models and experience first-hand the latest in our industry-leading marine technology, innovation and luxury appointments. I know they will be very impressed with the calibre of yachts we are creating at Riviera today.”

Growing significantly from an exhibitor show in 1989 to the world-class showcase it is today, the Sanctuary Cove International Boat Show attracts upwards of 40,000 visitors and more than 300 quality exhibitors each year, cementing its place as the southern hemisphere’s premier marine event. Exhibitor applications are now open.

To register as an exhibitor, contact the boat show office on 07 5577 6011 or visit sanctuarycoveboatshow.com.au