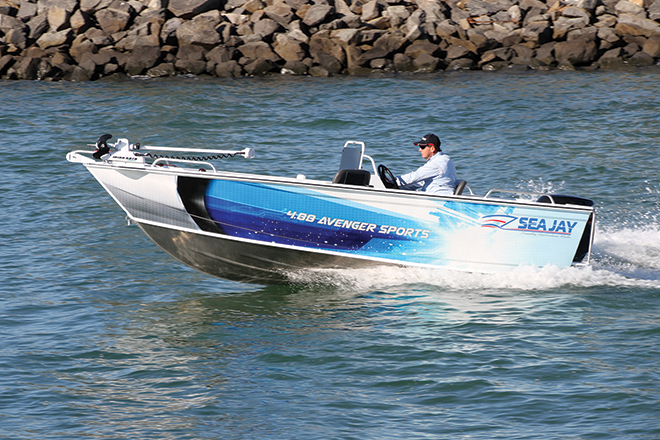 Powered by a Suzuki 70hp four-stroke the 4.88 Avenger Sports packed a punch.

WITH the growing popularity of sportfishing boats around the 5m mark, manufacturers have had to come to the party with models that tick most of the boxes for the modern angler. Sea Jay is one Queensland-based boat manufacturer that prides itself on developing and building top-quality and functional boats to meet this need.

The Sea Jay Avenger Sports range has a few standard inclusions that set these boats above your basic entry-level rig. First, the Avenger Sports boats feature a side console, which not only gives them a sporty look but also means you don’t have to drive a tiller model.

I’m not sure if it’s because I’m getting older but I prefer a console over a tiller these days, especially if I’m doing a lot of driving. The console offers a small amount of protection from the elements but more importantly it is a great place to house your electronics.

The incredible sounder and GPS technology available nowadays means we spend a lot of time looking at these devices to find bait and structure to increase our chances of catching a fish or two, and I think a console helps. The layout of the Sea Jay Avenger Sports is relatively simple but very clean, which is what you want in a sub-5m boat.

You don’t want too many things that make moving around harder than it needs to be. In saying that, as standard you still get a large slightly raised casting platform at the bow which has plenty of benefits. The platform is only slightly raised so you still get plenty of freeboard, which ensures a secure feeling but also provides easier access to the anchor and optional electric motor.

The deep sides are a good thing if you are going to have small kids in the boat. The rear casting platform also allows easier access to the boat from the stern. In the 4.88 Avenger Sports test model, the battery for the electric motor was stored under one side of the rear casting platform, with a live well housed on the other side.

This area is easily accessible so you could also put a couple of extra bits and pieces around the battery. Under the front casting platform is a massive amount of storage, with plenty of room for tackle bags, small Eskies and life jackets. I am all for keeping a fishing boat clean and clutter-free, so the large storage area is a positive.

Additional storage can also be found in the side pockets that run down both sides of the boat. These are a great inclusion as once again they offer very convenient storage for a mix of items. In terms of performance, the test boat was fitted with a 70hp Suzuki four-stroke, which was a very good match.

Even though the 4.88 is rated to 90hp, if you were just intending on having one or two anglers fish out of the boat, or mum and dad with a couple of kids, the 70hp outboard is ample. And that is not something I usually say, as I’m generally a fan of whacking the maximum horsepower on the back.

It’s hard to say definitively without testing, but I believe it would be an absolute weapon with a 90hp on the back, especially as the test boat was almost hitting 60km/h with the tide. A notable performance feature of the Sea Jay Avenger Sports was its ultra-quick hole shot.

Jumping on the plane was almost instantaneous after a solid punch of the throttle. Interestingly, the boat planed at a relatively slow speed, which made driving much easier throughout the whole rev range. It also remained very stable and level through some hard and sharp turns, which can be attributed to the Adrenalin Hull design that features on all but the smallest Avenger Sports model.

The Adrenalin Hull has been designed with a broader beam, giving more water displacement and enabling an increased horsepower rating, and a deeper V for sharper entry into the chop, which gives it a smoother ride. In fact, I could fault nothing in terms of performance and handling.

This feeling continued for the overall finish of the whole boat. One thing you will discover, especially if you ever meet the team at Sea Jay, is all the team members are very proud of every boat they make, so you can always expect a quality job. The attention to detail is so particular that even the marine ply for the decks is individually cut to match each hull, which ensures everything is lined up with no gaps, giving a clean and solid feel to the boat.

Other concepts include the built-in seat bases, which are effectively a piece of pipe, but I think this is a better design than your standard seat base plates because it provides a level finish on the floor of your boat. This means you avoid kicking toes or slipping on slightly raised seat bases, and tackle boxes and Eskies will also sit flat on the floor under your seats and not wobble or move around. 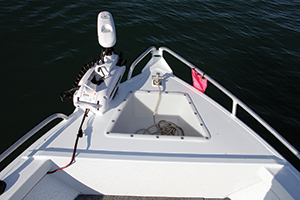 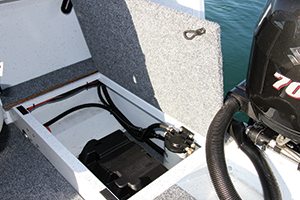 While under 5m in length, the Sea Jay 4.88 Avenger Sports felt like a big boat, which I partly attribute to the clean layout but also the substantial 2.3m beam and 1.22m depth. Overall, the Sea Jay 4.88 Avenger Sports is a sweet package.
It’s big enough to go almost everywhere, including offshore on a good day, yet one person can easily handle it both at the ramp and on the water.

And the best bit is you won’t break the bank, with packages starting from $29,990 with a 70hp four-stroke Yamaha on the back (price quoted by Stones Corner Marine, phone 07 3397 9766). The test boat was supplied by Sea Jay and had a few optional extras such as a sounder and electric motor, which would increase the price a little.

To see this boat in action, make sure you check out the BNBFTV YouTube channel, and for more information and to find your local dealer, visit www.seajayboats.com.au

Previous The mangrove jacks are back!
Next How to improve your flathead catch rate (tips for Flathead Classic)