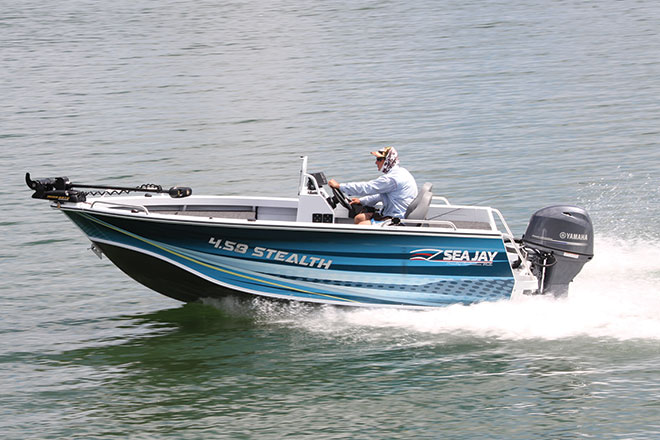 The 4.58 Stealth had punchy performance with the Yamaha 70hp four-stroke.

BUNDABERG-based boatbuilding company Sea Jay generally seems to be at the pointy end of innovation and one of the company’s latest models, the Sea Jay 458 Stealth, is a fine example of this.

Design
As the name suggests, the 458 Stealth has been designed to meet the needs of the most avid sports fisher. The concept behind this boat comes from the older but functionally designed V-nosed boats, however it has had a major overhaul and been drastically reconfigured.

In saying that, the basics of the traditional V-nosed boat carry over, including a relatively flat bottom and less-aggressive hull entry. By keeping these traits, you end up with a very stable fishing platform, but it has been modernised.

One thing you will notice about the Sea Jay Stealth is it feels much bigger than a 4.5m boat, probably due to its width, which comes in at 2.08m – not bad for a boat with an overall length of 4.58m.

In addition, the slightly higher sides than a more traditional sports fishing boat give a safe and secure feeling, which is ideal for anglers of all ages but especially younger ones. Higher sides also mean the front casting platform is higher, which provides a few distinct advantages to the sports fisho.

Your view of the water will be at less of an acute angle, which makes it easier to see underwater structure and fish. The elevated position allows you to cast further too, and enables longer rods to be ripped downwards for fast and erratic retrieval of lures.

Another flow-on benefit of higher sides and a raised casting deck is an increase in underfloor storage space where you can stow more and bigger pieces of gear easily and out of the way. Together, these modifications make the boat more fishable in a mix of situations.

However, this boat has predominantly been designed for more protected waterways such as dams, rivers and inshore waters.The only potential downside with the high front casting deck is it may be a little too tall for some anglers to step onto.

In any case, I’m sure the guys at the factory could lower it to suit, which is a benefit of dealing with Sea Jay as the company is always keen to make its customers happy. Also aiding fishability is the Fish Deck Transom, a new concept from Sea Jay where the transom wall has been lowered to the height of the casting platform.

This provides similar advantages to the front deck, meaning a better vantage point from which to cast and more importantly to retrieve your lure from. It also makes getting in and out of the boat much easier, which is great if you have kids or are not as nimble as you used to be.

Combine this with excellent stability at rest and you have a vessel that is very easy to get on and off, which is an important factor for some fishos.

Engine and fuel consumption
For this test, the Sea Jay 458 Stealth was fitted with a very economical 70hp Yamaha four-stroke outboard.

This is the maximum rated horsepower for the 458 Stealth but it had very impressive fuel consumption to boot, with almost 4km per litre economy at the optimal cruising speed.

However, this engine will be economical at most speeds, and when combined with the reverse chine and flat planing hull of the Sea Jay Stealth, you get a boat that is nimble and handles well throughout the rev range. Given the performance and economy of this package, together with the 80-litre underfloor fuel tank, you will never be left short of fuel.
Ride
It is worth noting the ride was very smooth and comfortable and this can be partly attributed to the solid 3mm side and bottom thickness. This makes the boat very sound and structurally secure, especially as 10 floor ribs are used in the construction.

This works out to be basically one rib every 40cm, which again for a 4.5m boat means it is designed to handle the elements as well as provide longevity and quality. Also making the ride more enjoyable are the very decent seats.

Seats are one thing Sea Jay has got down pat and are well worth checking out the next time you are running your eye over one of these boats – which might just be at the upcoming Brisbane Boat Show from August 25-27.

Storage
I also liked the large amount of storage in this boat. In smaller boats, storage is vital because it makes the boat more fishable and you can bring excessive amounts of gear, which I tend to do.

But in the Stealth’s case, it can all be kept out of the way yet within easy reach. The test boat was fitted with an additional live well in the rear casting platform. Depending on what you plan to use the boat for, the extra live well might be a good upgrade.

If you don’t get one, this area becomes additional storage space. Overall, Sea Jay has delivered a genuinely high-quality boat.

For more information on this or other Sea Jay models, check out seajayboats.com.au

You’ll find a full list of dealers on the website, so you can find one near you and view the awesome range of Sea Jay fishing boats in the metal.