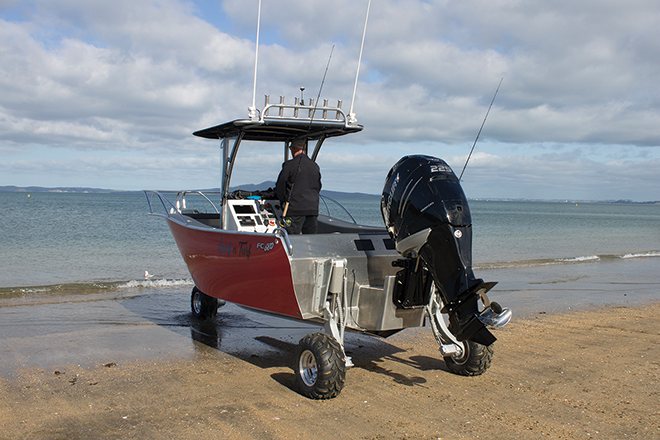 HAMILTON, NZ-based FC Boats is on the cusp of adding an amphibious option to its well-respected line-up of specialist fishing boats, and Mercury Verado technology is helping make this unique package even more attractive.

Ross Christensen and his team at FC have created an FC 680 Sealegs prototype that is garnering plenty of attention because of its clever design, improved aesthetics and lovely handling. 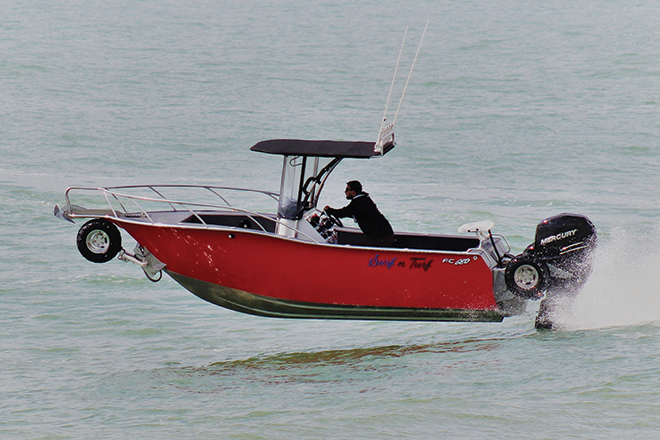 The boat is unusually roomy for an amphibious craft because the additional engine, which drives the Sealegs’ wheels and hydraulics, has been built into the centre console, with the hull reengineered to conceal the pipework necessary for cooling and exhaust.

Additional storage areas have been created to ensure all the floorspace remains available for walking and fishing. Externally, the Catalina-style raised sheer line of the FC 680 means the front wheel of the Sealegs system is also tucked away nicely when it’s elevated, providing a more visually pleasing profile.

“It has generated heaps of interest,” Ross said. “Whenever we took it out for a test we’d have people follow us right back to the workshop.” The one-off prototype was made for one of Ross’s existing customers who lives right on the water and wanted a fishing boat he could simply drive in and out of his boat shed.

“He’s really happy with the end result,” Ross said. “And so am I. “We had to do quite a bit of research and development, as well as modify the hull somewhat, to make sure the overall package worked.

“For example, all the Sealegs equipment weighs about 500kg, which had to be taken into account, but this hull was designed originally for a similar overall weight, so it works well with this sort of load.”

A key element of the prototype’s overall success has been the decision to pair it with a six-cylinder 225hp Mercury Verado that has brought both power and technological benefits into the mix. The Verado’s power steering technology has allowed FC Boats to link the outboard and the front wheel in one steering system.

“It works better than other brands due to the Verado’s vertical steering pivot, even when the motor is fully trimmed up,” Ross said. “It really enhances the steering of the boat when it’s up on its wheels.

“And when it’s in the water it’s a beautiful boat to drive.” The Verado’s Digital Throttle and Shift also makes the change from ‘boating’ to ‘driving’ much quicker and easier, particularly the digital throttle and stop/start button.

“With this Verado we’ve had the boat up to 40 knots and there’s so much acceleration,” Ross said. “It jumps onto the plane beautifully when fully loaded, no bother at all.” With the success of the prototype, Ross and his crew are now considering a slightly larger 7.3m version to add to the FC Boats line-up.

“We’re looking at it very carefully because we don’t offer a new boat until we’re absolutely sure it’s ready,” he said. “We’re also working closely with Sealegs. “But we think that a slightly longer boat, probably with a 250hp Verado, will be an even better performer.”

For more information about FC Boats, visit fcboats.co.nz and for more on the Verado range, visit mercurymarine.com.au