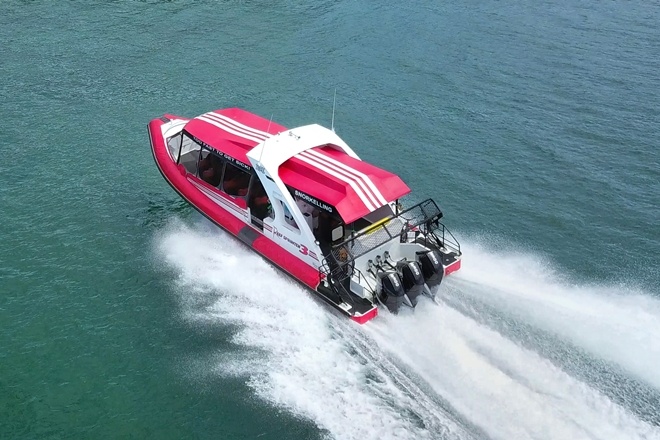 SeaPro a winner for Reef Sprinter 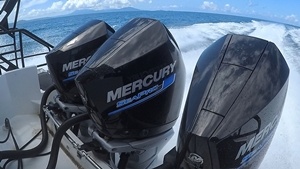 STEVE and Cathy Sherwell opened Reef Sprinter in Port Douglas in 2005 after spotting an opportunity to provide tourists with fast, fun snorkelling trips. It turned out to be very good idea, with the company now boasting a fleet of three custom-made RIBs, offering national and international visitors a range of tours to experience the beauties of Low Isles Reef and the Great Barrier Reef. And it was a case of trial and error that led to the decision to repower with Mercury V8 4.6L 300hp SeaPro.

“We started with one brand which had good gearboxes but the engines were a problem,” Steve said.

“Then we swapped to a brand that had good engines but weak gearboxes, so we tried again and we’ve found Mercury SeaPro to be the answer.

“With Mercury we’ve finally got the combination of good engines with good gearboxes.”

The Mercury SeaPro is engineered from the skeg to cowl to withstand the rigors of commercial use. Built using heavy-duty components, SeaPro engines are backed by a dedicated commercial warranty that includes protection against corrosion.

Reef Sprinter is one of Port Douglas’ leading tourism operators with a fleet of three custom-built 12m vessels that are now all powered by Mercury:

Reef Sprinter 3, the company’s main boat, and weighing about nine tonnes fully loaded, was custom-built to take 14 passengers to the outer reef in 45 minutes where they can enjoy an hour and a half of snorkelling before heading back to shore.

“To make that work, and to make it exciting for our guests, we want to cruise at about 34 knots,” Steve said.

“These SeaPro V8 Verados can give us a top speed of 42 knots, but we can cruise comfortably at 34 using about 140L of fuel an hour.”

That’s 20-30L an hour better than the boat’s previous engines and, with the Reef Sprinter 3 scheduled to do two trips a day during peak periods, those fuel savings will add up. And that’s without factoring in reduced maintenance and repairs.

“The new V8s were first fitted to our twin rig about a year ago and proved to be impressive, which is why we repowered our triple rig about a month ago,” Steve said.

“With 60 hours of operation, they’ve proven to be reliable and economical, and they sound like a V8 supercar, which is always nice.

“Reef Sprinter 4, which is a very similar boat, has three 350hp supercharged Verados that have

notched up about 1900 hours and have given us no problems – the gearboxes are fine, everything’s fine – so I’m not expecting any issues with these new SeaPro V8 Verados.” Before selecting the new engines, Steve spoke to Gus Bonner from Aussie Marine in Cairns, the man who’s been looking after the Reef Sprinter boats for about 10 years.

“I’d been impressed by the Mercury 350s, so when Gus told me about these new naturally-aspirated V8s, I did my research and read the reviews and decided they were the way to go,” Steve said.

“Gus employs a great mechanic called Rob who did a very neat job of repowering our boats, given they were originally designed to suit another brand.”

Mercury V8 4.6L 300hp SeaPros are lighter than the competition yet built to withstand the rigors of commercial saltwater operation. In fact, they are specifically designed for go-fast boats and commercial offshore operations, so are perfect for Reef Sprinter’s fleet.

“The engines are going really well so far,” Steve said.

“They’re reliable and now that we’ve got the props right, they are providing better economy – 20 or 30L better every hour.

“The tourism industry up here still has a long way to go to recover from COVID-19, but the down time has given us the opportunity to do the repowering.

“With business slowly coming back to normal, it’s nice to have all new engines for when tourism recovers fully.”

To watch a video about this business and their Mercury engines, click here. – Mercury Marine