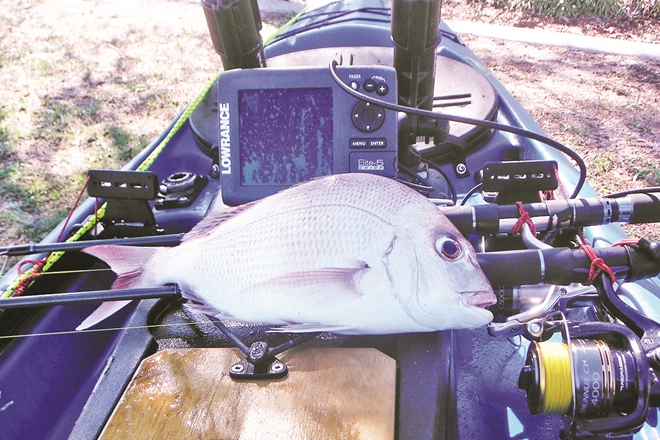 In Search of Redcliffe Snapper

I HAD heard stories for years about the snapper fishing on the shallow reefs around the Redcliffe peninsula but had never been able to find the time to head down and give it a crack.

Finally an opportunity presented itself when my wife said she wanted to visit her mum on the north side of Brisbane for Mother’s Day. I checked the forecast and it looked great, with only a light breeze and the start of a run-out tide in the morning. I thought: ‘Beauty, I can head down early, hit the water and chase Redcliffe snapper and meet them around mid-morning.’

Prior to Mother’s Day I had been chatting via Facebook to a guy who has been fishing for Redcliffe snapper for many years. He had been at me to come along and join him for a fish for a while, so I hit him up to see if he was keen to tag along and provide a bit of local knowledge. I organised a spare kayak for the day and made plans to hit the water at first light. The day finally arrived, my alarm went off at some ridiculous hour and I rolled over to see a Facebook message from my mate saying he had to back out at the last minute. He had been fishing with a guy on the Friday night and he’d left all his gear in the other guy’s car.

As I lay in bed for a minute, contemplating whether or not to just roll over and go back to sleep, I figured what the hell. Everything was packed and ready to go, so I decided I would just head out on my own. I had a bit of an idea about where to go after a discussion with my mate the night before, so I jumped in the car and headed down the highway. I arrived at the Woody Point Jetty shortly after 5am, and because the tide was still fairly high I went for a quick walk to scout a suitable launching point.

Eventually I found a small sandy beach to the east of the jetty, so headed back to the ute and began rigging up my kayak with my Tackle Pod, Chill Pod, seat, paddle and anchor before loading the yak onto my C-TUG trolley and setting off for the beach. By now the sun was starting to rise and I could see a few boats anchored in the distance. I paddled out, watching the sounder for any structure holding life. Eventually I found a bit of a rubble patch and decided to drop the pick and soak a bait for a while.

One of my favourite rigs for chasing snapper is a floating setup consisting of either a set of Tru-Turn gangs or a two-hook snell of 6/0-7/0 octopus hooks with a small running sinker that is light enough to allow the bait to slowly drift down in the current.

I usually fish fairly light, with 20lb main line and about a rod length of 40lb leader. I like a fast-action 5-10kg rod of about 7’, and I am in love with my Samurai Elevate. This rod is light but has plenty of grunt when needed. The light tip makes detecting even the slightest bite a breeze, and it casts like a dream due to the Fuji K series guides.

As for reel selection, I prefer a 4000-5000 spin reel. I have one rod rigged with a baitrunner so I can set a line and forget about it until I hear the drag scream, while the other is a conventional spin setup. With a pillie drifting in the current, I set about rigging a second rod with a plastic in the hope of triggering an aggressive strike from a marauding snapper.

While working the plastic I could see the other rod starting to buckle and soon had an undersized snapper in the yak. It was certainly a far cry from the 50cm-plus model I was looking for but it was the right species. A quick pic and the fish was off. I chose to stay in this spot, feeding out small diced pieces of pilchard to establish a berley trail
for the next half an hour, however it went quiet and I pulled anchor to go in search of more ground.

As I approached an area where about 10 boats were anchored, I noticed a bit more structure on the bottom and dropped the anchor for another crack. Again the fishing was a little slow, however was I consistently getting smaller bites and hoped this may attract the attention of a larger predator. I finally got a solid hook-up and the fish took off with a massive burst of speed. It didn’t take long to realise it wasn’t a snapper but a stingray. I brought the ray alongside before cutting the leader.

On the next cast I was in luck and got another solid hook-up, and this time it had the distinctive head shakes of a snapper. I quickly reached forwards to turn on the GoPro in the hope of capturing footage for the trip report. After a couple of smaller runs I had the fish in the net. While it wasn’t a monster, it was certainly legal and coming home for dinner.

With the time now approaching 9am, I decided to paddle in and head to the in-laws’ place for a coffee. Back at the beach, the Viking Profish Reload certainly got a lot of attention from passers-by, with several people asking questions about the setup.

If you haven’t checked out the Viking Profish kayaks, drop by the Viking Kayak & SUP at 188 Nicklin Way, Warana and I will be happy to show you through the range and discuss your kayak fishing needs.