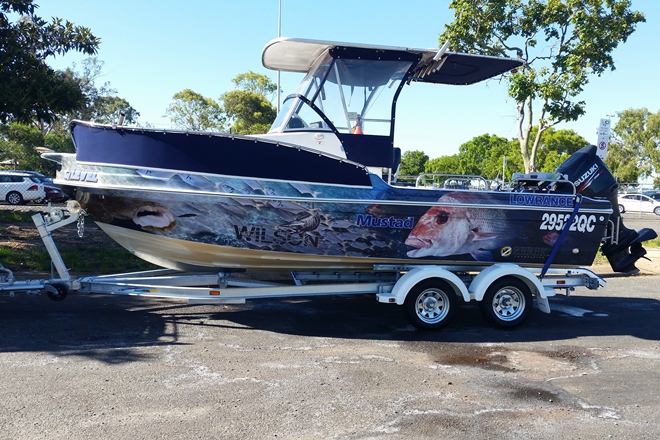 It doesn't matter how old your boat is, they always look good when you put a shiny new trailer underneath them.

ABOUT four years ago I came back to the boat ramp after a day on the water to find someone had decided they needed my boat trailer more than I did, which left me with a few problems.

One, my vessel was still in the water with no way of getting it home, and two, being a commercial operator I needed to get back up and running as soon as possible. After dealing with all the paperwork with the police and working out that insurance money would nowhere near cover the price of a new trailer, I organised a marina berth and immediately got on the phone to start ringing around to find a new trailer.

After a few phone calls to the standard trailer makers in the industry I realised it was going to cost me at least $6000 for the trailer and nobody had one in stock, yet I needed to get back on the water ASAP. I ended up ringing a mate of mine in the boating industry and told him my dilemma. He recommended I call the team at SeaTrail here in Brisbane, so I did and luckily enough the boys were able to set me up with a trailer within two days. The trailer wasn’t quite as long as I had wanted but it was enough to do the job.

I can honestly say four years later that it was the best money I’ve spent on a trailer and it cost nowhere near $6000. Four years of commercial use later, I was able to sell that trailer and it was still in good condition. I’d never even changed the bearings on it. The bloke who bought it is going to give it a bit of a touch-up and it’ll go straight under his boat and keep on going. I guarantee he’ll get a lot of years out of it in a recreational application.

That brings me to the new trailer I’ve decided to buy from SeaTrail. I don’t get my trailers for free, I have to pay for them, so like all of you I want to get the best value for money. So far I can’t fault these trailers. We’ve put a new one under the work boat and hopefully we’ll get plenty more years out of it as well. I decided to buy a new C-channel galvanised steel trailer this time because we know when boat trailers decide they want to rust it’s not the rust on the outside we worry about, it’s the rust on the inside of the tubing.

Being a C-channel trailer means there is no box sections and any rust you get on the outside can be spotted and worked with. This is a really big plus. And unlike aluminium trailers where you may have dissimilar metals causing corrosion, my new trailer is all one material.

Something I noticed about these trailers is they are constructed with quite a thick-gauge C-channel of about 6mm (though don’t quote me on that). Overall the trailer is heavier than a standard box-section trailer, which I’ve found has made it ride particularly well when towing my 6m boat at speed.

This has definitely opened up longer trips than I probably would have attempted with the lighter trailer. I put the biggest C-channel trailer SeaTrail had available under my boat. SeaTrail manufactures a wide range of trailer sizes and varieties and if you go to seatrailqld.com.au you’ll find all the models.

Alternatively, give the team a ring on 07 3393 9463 and the guys will definitely help you out with a trailer at the right price. If you’ve got the time, drop in and see the team at the shop in Hemmant where you’ll find a really good range of everything you could need in terms of trailers and accessories.

One service SeaTrail offers, and one I wish I’d taken advantage of after spending a fair few hours crawling around underneath my trailer and driving it on and off to work on it in the car park, is if you go in to the shop with your vessel and you’ve bought a new trailer, the team has the machinery to lift your vessel off your old trailer and put it onto the new one. The guys will even adjust it correctly and get it set up. I think this is a great idea and next time I get a new trailer I will be taking advantage of this service.

Even if you’ve got a preferred trailer supplier, why not give SeaTrail a call and check out the range. You never know, you may save a few bucks and get yourself into a new trailer earlier than you thought.