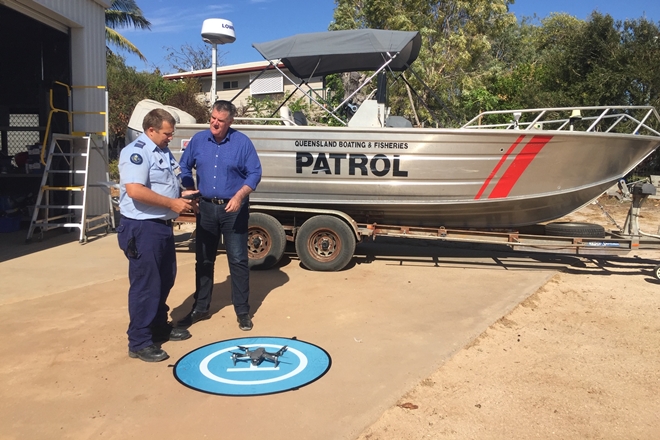 QUEENSLAND Boating and Fisheries Patrol officers in the Gulf of Carpentaria are putting an eye in the sky to help protect the region’s fisheries resources.

Minister for Agricultural Industry Development and Fisheries Mark Furner said a drone is being used by compliance officers to extend their surveillance reach.

“By its nature, Queensland Boating and Fisheries Patrol field work can be hazardous and officers at times operate in difficult and often isolated environments,” Mr Furner said. “The new drone, based in Karumba, will allow Queensland Boating and Fisheries Patrol officers to monitor marine habitats and fishing operations across the Gulf from a distance. Ten drones have been deployed around the state, including to the Gold Coast, Warwick, Noosa, Hervey Bay, Bundaberg, Mackay, Townsville, Cairns and in Brisbane, with trained pilots in each of these locations.

“Footage from these drones could be used to gather intelligence, prosecute people who break the rules and support training of the Marine Animal Rescue Teams. Already this year, the total number of fines and prosecutions for fisheries offences in the Karumba district has risen to 24 this year and a total of more than $24,000 in fines. Equipment like these drones will help QBFP officers protect fish stocks in the Gulf for our children and grandchildren.”

“We are building a legacy of a sustainable fishery for our children and grandchildren,” Mr Furner said. “Thousands of jobs, from commercial fishers and tourism operators to tackle and bait shops depend on having enough fish to catch, and that’s what our Fisheries officers protect.”

“Our crews operate cover 7000 kilometres of coastline and hundreds of inland fishing areas from far western Queensland to offshore waters 200 nautical miles to sea,” he said. “It’s a huge task and we’re always looking at more efficient, safer ways for our officers to go about their business. The drones are just the latest high tech tools provided to our frontline fisheries compliance officers.”

Along with body cameras, the QBFP’s surveillance capacity has been turbo-charged with an array of high-resolution digital, dashboard and infra-red cameras, night-vision monoculars, ghillie suits and other covert gear.