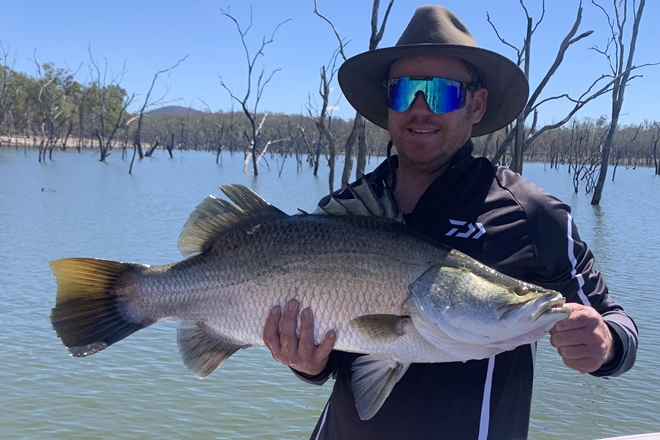 Hunting barra in the cool at Lake Monduran

AS we all know, it can be a little harder hunting barra in the cool than the warmer months.

However, I still use the same things I do in summer. The things I look for are wind direction, barometer, water colour (for lure choice) and then find what depth of water the barra are moving in. One thing I don’t do is spot lock until I find how spooky they are, because spot lock can freak them out.

Tying to a tree is much quieter and can be in your favour. I then pick out a few lures and they are always B52s, a Lucky Craft Pointer, Maria Saruna and a Happy Rock soft plastic in a Grub or Maxx. As I use them, I will progressively change colour to work out what the fish want. I get told and have read that only one lure works in Lake Monduran. This is a load of rubbish. I use this variety of lures all the time and catch barra on all of them.

The next thing is to work out what technique to employ. I start with a long cast, then double twitch down, leave it sit for a long time, make a single twitch and wait again. I find it’s either the length of time it sits there in front of them or the twitch that makes them strike.

If you’re getting bumps and swirls behind your lure, the barra are unhappy about maybe the colour or technique, so you need to change things until they bite. When the wind is moving all over the place, try to pick which way it’s predominantly coming from and start there. You may need to move a few times but it’s a good starting point. I’ll also go to the standing timber in deep water and look at the moss on the trees. I look at which way it is being pulled and those are the banks I head for. If my plan has paid off, barra will be on the sounder.

I’ve noticed some people drive in on the big motor, turn it off and expect the barra to be there ready to feed. Well guess what, that won’t happen. Make too much noise and they are gone. If you are lucky and sit there silently, they may be back. I always go in on the electric motor and use the wind to move the boat as much as I can. Barra like to move close to the timber in the shallower water from about 60cm to 2.5m.

I will almost always have my boat sitting in 4.5m of water and cast past the standing timber to the weed at the back of it and along the bank, as they will be around this weed also. Safety is a big thing for barra. If they feel threatened, they like to have somewhere to go. This also gives them something to take your lure into and bust you off, which is going to happen some of the time. My reels are loaded with 30lb braid and 80lb leaders.

My reels are never locked up firm because they are one fish you need to let run (to a point). I always keep some pressure on because if you don’t, they will throw the hooks. The other thing I believe people do wrong is hold the rod tip too high while fighting the fish.

When they jump, a high rod tip sees you lose the ability to keep the pressure on them and can also result in them getting rid of the hooks. But when it happens, as we know, it’s in the blink of an eye and we are never ready for it. If it all comes together, we get them in the net and hold them up for a picture. They are by far the best fish to hook and you can really have fun with them once you work out what they want.