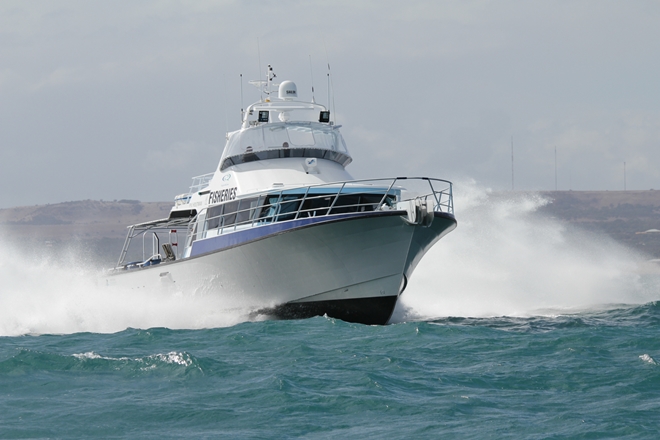 MEASURES introduced last year, to protect the Gascoyne, WA pink snapper fishery, need to be monitored to ensure success and this year’s closure was a key focus of Operation Applehaven.

Each running across a week, from July 29 and again from August 6, utilising the large and versatile Department of Primary Industries and Regional Development Patrol Vessel Houtman and Fisheries officers from the Midwest and Gascoyne, both commercial and recreational fishing vessels were checked.

The 20 metre PV Houtman was a handy on-water base to deploy smaller craft that carried out more than 30 at-sea inspections of recreational fishing boats in the area. It provided the opportunity to check boats up to 70 nautical miles off the coast, including 11 commercial vessels conducting fishing operations as well as offshore recreational fishers.

Some offences were detected and are still being investigated, but Operation Applehaven also showed the majority of fishers were doing the right thing and sticking to the rules. One offence, detected 60 nautical miles offshore from Carnarvon, identified the possession of small numbers of undersize pink snapper and is being followed up by compliance officers. With last year’s reduction in commercial quotas and the introduction of a seasonal closure, it was timely to check adherence to the new pink snapper rules now in place in the region.

Department of primary industries and regional development regional manager for the midwest and Gascoyne, Mick Kelly said the current seasonal closure of the area that surrounds Northern Bernier Island and also Koks Island would continue until the end of the month.

“The fast and powerful PV Houtman provides significant surprise value in a remote area like this and Fisheries officers will be using various monitoring strategies to oversee the three-month season closure each year over June, July and August,” Mr Kelly said. “While line fishing for other species is still allowed in the closure zone, fishers must not have any pink snapper on-board their vessels while they are fishing in that zone throughout the time the seasonal closure is in place. The purpose of the new Gascoyne fishing rules is to assist recovery of oceanic pink snapper and the annual closure zone covers about four percent of the waters traditionally fished in the Gascoyne. It’s a spawning area for pink snapper during their peak winter spawning season and sustainability of the species depends on how successful regeneration is to support the pinkies.

“Special patrols, like Operation Applehaven, will continue to be part of the compliance strategy and anyone who suspects illegal fishing in the zone is urged to call FishWatch, 1800 815 507.”